We are profiling the top-contenders for the 2019 Kentucky Derby based on pre-race odds as set by book-maker William Hill. These articles will highlight why the featured horse can hit the wire first in the 145th run for the roses. 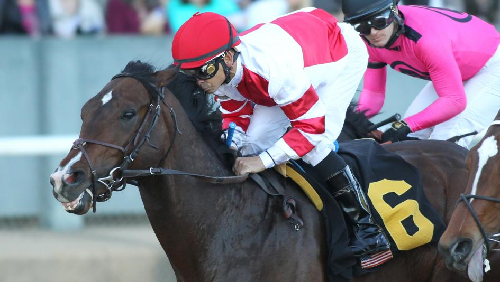 Smith had to make a choice, ride trainer Bob Baffert's ROADSTER or Richard Mandella's OMAHA BEACH. Tuned-in horseplayers anxiously waited for the jock's decision with the understanding the Hall-of-Famer would pick the horse he believed has the better shot to win.

The 53-year-old selected OMAHA BEACH, hoping to follow in the footsteps of his 2018 Triple Crown triumph with JUSTIFY. Jockeys switching horses is an old-school betting angle and one worth watching. It's said jocks know the horses they ride the best.

Churchill Downs' oddsmaker Mike Battaglia said Smith's decision makes OMAHA BEACH the morning-line favorite. Being the favorite at post-time is the place to be. The public's choice has won every Kentucky Derby since the point qualifying system was implemented for the 2013 race.

Another consideration is OMAHA BEACH's running style. The three-year-old likes the view from near the front. The winner of the last five Kentucky Derbies has run second or third at the quarter-mile pole. In six of his seven races, OMAHA has been no more than a few lengths from the leader in the opening quarter and had the lead for good by the 1/2 mile pole in the Rebel Stakes and Arkansas Derby.

OMAHA BEACH has already beaten IMPROBABLE and GAME WINNER, two of his top competitors. According to William Hill's lines, GAME WINNER is the second choice to with the Kentucky Derby at 5-1 and IMPROBABLE is tied for fourth with TACITUS at 8-1. Between the two sits ROADSTER at 6-1. To line it up, OMAHA defeated the number one and three contenders according to pre-race odds and jockey Mike Smith picked him over ROADSTER.

To reiterate, here are reasons why OMAHA BEACH will win the 2019 Kentucky Derby.

3 - Early speed types have won the last five runs for the roses, OMAHA BEACH's style should have him near the front.

Those four reasons make a compelling argument to put OMAHA BEACH on top of your 2019 Kentucky Derby ticket.

Make sure you check back soon for the next in our series on why other top contenders will win the 2019 Kentucky Derby.

GET OUR FULL CARD KENTUCKY DERBY PICKS AND WAGERING GUIDE!