It's the lull after the Triple Crown storm, but that doesn't mean the big stakes racing winds aren't blowing. Today, there are 10 races with $100,000 or more in prize money.

As you can see, Churchill Downs returns to the big race spotlight, two of which catch our eye.

The MATT WINN STAKES and STEPHEN FOSTER STAKES, both G2s. The MATT WINN STAKES looks like a Kentucky Derby consolation race as a handful of the entrants were on the Derby trail but failed to make the field: Limonite, Signalman, Nolo Contesto, Knicks Go and Mr. Money.

The race kicked off in 2002 as the NORTHERN DANCER STAKES at 6 furlongs. It was changed to the MATT WINN STAKES in 2011 to honor Colonel Martin J. "Matt" Winn. He was the General Manager and President of Churchill Downs from 1902 to 1949. Many credit the Colonel for making the Kentucky Derby what it is today, one of the biggest sporting events in the country.

This year, two others will join the five Derby hopefuls for the field of seven that will run 1 1/16 miles on Churchill's main track. The distance/surface slightly favors early speed with 27 of 53 winners labeled as early speed. On average, the typical winner ran 3.1st at the 1/4 pole and 1.8th at the 1/2 mile marker. Three horses fit that profile, NOLO CONTESTO (PP: 3 ML 3-1), KNICKS GO (PP: 4 ML 5-1), and to a lesser degree MR. MONEY (PP: 6 ML 2-1). The oddsmaker says MR. MONEY is the one to beat. The Bret Calhoun trainee popped by far the highest last race speed rating for this crew and figures to be a force again today.

From our Pro Subscribers' Bonus Commentary:

"MR. MONEY just won the Pat Day Mile at Churchill by 5 1/4. KNICKS GO has the back-class to pull this one off. SIGNALMAN just got pounded in the Preakness but has never finished out-of-the-money at Churchill in three tries (3: 1-1-1). LIMONITE gets to ride the 18% winning rail after winning his last effort."

With 600 grand on the line, the STEPHEN FOSTER STAKES is the most lucrative run of the day. While most horseplayers don't know who Stephen Foster is, millions upon millions who watch the Kentucky Derby are familiar with his work.

The sun shines bright in the old Kentucky home... In the 1850s, Foster wrote My Old Kentucky Home as an anti-slavery ballad. Today, casual and hardcore race fans know the song as it's played during the Kentucky Derby post parade.

A dozen horses will run 1 1/8 mile on Churchill Dirt for the 2019 STEPHEN FOSTER STAKES. On paper, it's a good betting race as GIFT BOX (PP: 6) is the morning line favorite at an anybody can win 3-1 odds. YOSHIDA (PP: 12) is next up at 7/2. Although the William Mott trainee has run on dirt in just three of his 14 career starts, his dirt numbers suggest YOSHIDA is a tier-one contender.

Our handicapper believes both will have a chance to hit the tape first, but sees another taking home the fat first place check. 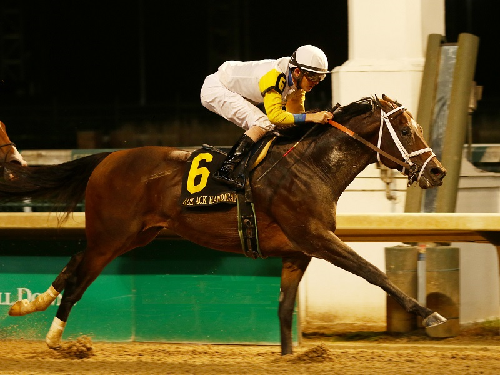 Seeking the Soul at Churchill Downs

"SEEKING THE SOUL is making his third start off the bench, a 33% winner for trainer Dallas Stewart. GIFT BOX has finished in the top two in eight straight. TOM'S D'ETAT has won five of six with a second on fast dirt. YOSHIDA bobbled at the start in the Breeders' Cup Classic in his lone Churchill jaunt. He still rallied for fourth."