It's 174 days until the 146th running of the Kentucky Derby and the start of the Triple Crown. The first Saturday of May can't get here fast enough if the weather around here is any indication of the winter to come; three inches of snow on Halloween and wind chills close to zero before Veteran's Day, ugh.

Last week's Breeders' Cup Juvenile was supposed to answer the question of whether DENNIS' MOMENT, EIGHT RINGS or MAXFIELD is the best two-year-old and early, pre-Derby favorite. MAXFIELD scratched before the race with a leg issue and the question became more muddled no sooner than the gates opening. 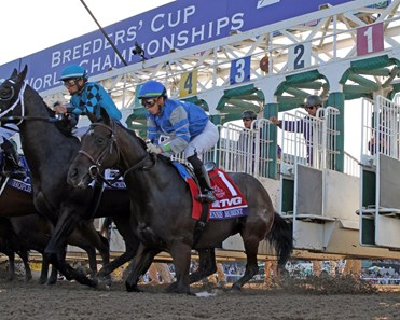 DENNIS' MOMENT at the start of the 2019 Breeders' Cup Juvenile

You would think the Breeders' Cup Juvenile winner, STORM THE COURT, would storm to the top of the tote board as the pre-race 2020 Kentucky Derby favorite. Nope. US Racing lists horse turned UFC wrestler, DENNIS' MOMENT as the 14-1 favorite, followed by TIZ THE LAW and scratched out MAXFIELD at 16-1. STORM THE COURT is tied for third at 20-1 with EIGHT RINGS and BY YOUR SIDE.

Although STORM THE COURT isn't the early betting choice, he does lead the field in 2020 Kentucky Derby qualifying points with 22. He'll need to add 18 more points to make Louisville, Kentucky reservations for the first Saturday of May, based on 2019's qualifying results.

MAXFIELD, TIZ THE LAW, EIGHT RINGS and DENNIS' MOMENT are tied for second with 10 points, exactly where they were before the Breeders' Cup Juvenile.

History is against STORM THE COURT doubling up with a Kentucky Derby crown. Only two Breeders' Cup Juvenile winners went on to wear Churchill Downs' roses. STREET SENSE was the first to complete the two-race exacta with the 2006 Juvenile and 2007 Kentucky Derby. NYQUIST is the other to accomplish the feat in 2015 and 2016.

NYQUIST is the last horse to run in the Juvenile, let alone win, to be the Kentucky Derby champion the following May. As a matter of fact, the recent record (since 2006) suggests only two Breeders' Cup Juvenile horses have a chance to score the Derby crown. STORM THE COURT will look to follow in the footsteps of STREET SENSE and NYQUIST.

If DENNIS' MOMENT qualifies for the 2020 Kentucky Derby, the TV announcers will let you know about MINE THAT BIRD and DENNIS' MOMENT similarities over and over. Remember, you read about it at Guaranteed Tip Sheet first! Despite the potential worst to first parallel, EIGHT RINGS' Juvenile run looks a lot more like MINE THAT BIRD's on paper than DENNIS' MOMENTs' early race takedown.

Horseplayers looking to play the 2020 Kentucky Derby Futures odds in late November might think about placing their wagers on horses that DID NOT run in the Breeders' Cup Juvenile, except for maybe, a big MAYBE, STORM THE COURT or DENNIS' MOMENT.