If you like betting the big races with sizeable money pools, then this is an amazing Saturday filled with opportunities to get your bet on. We've dissected the numbers, pursued countless angles, looked for every edge in handicapping 17, yes that's right, 17 stakes races with purse money of $100,000 or more.

From the east coast (Saratoga), through the mid-west (Arlington, Canterbury, Prairie Meadows), up to Canada (Woodbine), and out to the west-coast (Del Mar), from early afternoon to night racing, we've got you covered.

The biggest day of racing is just outside the Windy City, Chicago, Illinois, at Arlington Park Racetrack. On a side note, if you ever get a chance to go, it is a beautiful facility and great place to spend an afternoon; far from the nonsense you hear happening in Chicago from the news. Here's a nice look at the track:

The adage is to save the best for last. Well, to heck with that! We are flipping the script and getting right to the $1M G1 Arlington Million. It's a field of 11 racing 1 1/4 miles on the turf. One of the things that can play into the race is that the race starts about 2/3rds into the backstretch turn. Typically, an early turn, in what is essentially a two 2 and 1/3rd turns race, favors horses that save ground and hit the corners first. Usually, inside posts have the biggest advantage.

The thing is, the Arlington Million lacks true front-runners. The closest thing to inside speed is CATCHO IN DIE (M/L 20-1). He'll be firing out of the six-hole. Maybe jockey Jose Ortiz, Jr will rush OSCAR PERFORMANCE (PP: 11 - M/L 3-1) from the outside post to the front. It's possible SPRING QUALITY (PP: 2 - M/L 8-1) will up the early tempo as he tried the speed thing a couple of times two races back, but his normal style is like the rest of the field, rate-and-run.

The way we see it, "We are putting MONEY MULTIPLIER on the top of the Brown horses and our rankings. Almost all the other major players are making their first starts following a layoff; whereas MONEY is making his third post-break start and just ran his best race, after checking into the first turn. OSCAR PERFORMANCE is likely to be the bettor's choice at post-time. He might need a tune-up race as OSCAR has only won one of his last three first starts after a rest. Brown and jockey Irad Ortiz, Jr have been a power couple at the SPA; they team up with ROBERT BRUCE. The four-year-old's running style fits with Arlington's winning turf/route profile."

The MILLION is the back half of the BEVERLY D./MILLION double. In the opening leg, we've got our eye on two horses. In our bonus commentary, we note "ATHENA crossed the Atlantic and cruised to a Grade 1 win in her USA debut. She has a lot of reasons to improve, second off a layoff, second US effort, second time Lasix, and is likely to be in front of our second choice, SISTERCHARLIE, as they head down the stretch. SISTER likes to rally from deep and she'll be gobbling up ground late, but she'll need to pass our top choice who makes up strides to the wire as well. The strategy is simple for DONA BRUJA, get to the front and try to steal this race with easy fractions. She is lone front-runner and the jockey/trainer must know wire-to-wire is the horse's best chance." That's just two of the five Stakes races at Arlington Today.

GET OUR FULL CARD ARLINGTON PARK PICKS PLUS 22 ADDITIONAL TRACKS

Outside of Arlington festivities, the next biggest race of the day is the $500,000 G1 FOURSTARDAVE at Saratoga. It's a short field of six-runners going one-mile on the inner-turf in the 8th. The weather is likely to play a major part in the outcome. Rail-runner, WEEKEND HIDEAWAY is entered for the main-track-only. He's set 'em up and knocked them down on off-dirt, winning six of eleven. 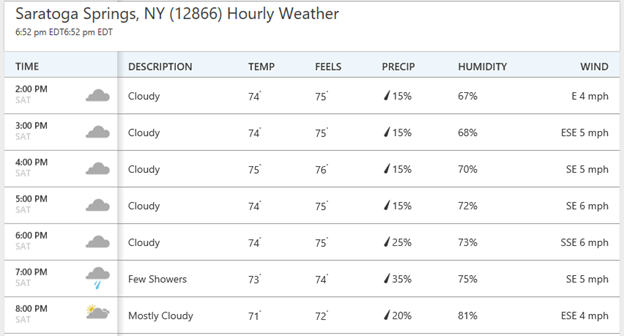 As it stands now, there is a 15% chance of rain. No rain would make it a better race, in our view. There is a sick, I mean sick, rail bias on the SPA's inner-turf. The one-horse has been victorious in 58% of the races. That's unreal.

On grass, the two will be the one as WEEKEND HIDEAWAY will scratch out of the race. DELTA SPRING isn't what we'd call a classic speed horse, but the five-year old does like to stalk second or third, saving his best for last. Despite the huge advantage, we've got some others that we prefer.

"HEART TO HEART could be hard to handle. Twenty-nine turf runs, 14 wins, a cool $1.9 million in winnings; class defined. If YOSHIDA keeps up at the same pace, he'll be a million-dollar horse too. Only one stinker of a race in his eight U.S. starts; otherwise, four wins and three seconds in eight grass starts. MADE YOU LOOK was racing his best before taking a rest. He's been off for 55-days. Workouts since have been better than average, but not standout; he probably needs one."

Whew, it's been a long day of handicapping. Let's relax, hopefully counting our fat stack on Bennies, where the turf meets the surf, Del Mar.

Race 3 is the $200,000 G2 BEST PAL, run at 6-furlongs on the dirt. Five two-year-olds are going to slug it out for the Best Pal Trophy and a $120,000 payday. No matter what you see on paper in the past-performance, anything can happen with youngsters. That being said, this race could be part of the proving grounds for a potential Superstar! With an eye towards the first weekend in May, say Kentucky?

Our tipsheet notes, "This race is INSTAGRAND and the rest. This horse has the best jockey, best trainer, best speed rating, and won his last by 10. He's a 1/2 morning line and probably headed lower." Let's look at his race on June 29th at Los Alamitos:

The truth is, there is really no reason to bet this race. It's possible to lose money with a winning exotic ticket. The only bet we'd consider is to backdoor the 1, but that's most likely a losing proposition too. Other than that, INSTA is likely to be a freebie in the second leg of the early Pick 4 or the third leg of the Pick 5.

It's a big day at the races, best of luck!