Sunday Stakes: Longing for some Sunday Sun and a winner in the Astra Stakes

It's a quiet Sunday of stakes racing with just a pair of runs with jackpots of $100,000.

Who knows if the gates will open at Aqueduct with the forecast for the northeast and the middle of the country calling for messy, cold, wintry weather. So, we'll jealously focus on the warmth of the Southern California sun.

The Grade III, Astra Stakes features seven fillies and mares, racing 1 1/2 miles on Santa Anita's turf course. It's an awkward layout for the ladies; three turns with the horses running downhill and turning onto the main course.

Inside horses should have the advantage at the start with a quick, early turn as the field descends to the main track from the starter's gate. Let's look at our top four choices to navigate the curling, downhill run.

LOSTINTRANZLATION (PP: 1 ML 4-1) should be able to get to the front as potential lone speed. The six-year-old has been on the lead at the first and second calls in five of her last seven starts. She ran second or third in the other two. She's struggled to hold those leads late, winning just two as the frontrunner and second by a nose in the other; out-of-the-money for the rest. If she can run modest fractions upfront, then she might have enough late legs to eek out a win at the wire. 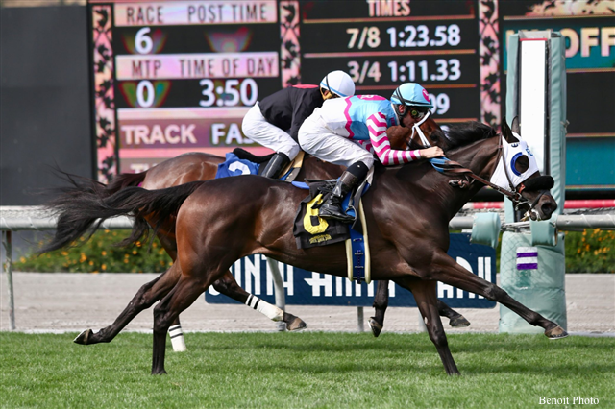 TINY TINA (PP: 2 ML 9/5) is making her third start after a short layoff. She tied for the highest, last race speed figure in her last effort, hitting the finish line second by a nose. Maybe she would have scored the W if not for a bobble at the start. She's a late charger with a strong Santa Anita record, three wins, two seconds and three thirds in 10 efforts. If she's within 5-lengths heading into the stretch, she'll be the one to beat.

BLUE DIVA (PP: 3 ML 4-1) is on a two-race win streak, including tying for the top speed figure in her last; however, both were on Golden Gate's all-weather (AW) track. She finished third the last time trainer Ari Herbertson flipped the four-year-old to grass from AW. Third seems to be her favorite place to be on turf with three of ‘em and a win in five grass goes. BLUE DIVA can contend, but we don't think she will visit the winners' circle as her speed figures dipped the last two times she switched from AW to turf.

HEATHERS GREY (PP: 7 ML 10-1) is another coming in from Golden Gate and moving from a synthetic surface to turf. She hasn't made that exact changeover before but did get her debut win in her first race on grass, following two terrible efforts on dirt to start her career. Turf is her preferred surface with two wins and two seconds in five races. Both wins and one of the seconds came on Santa Anita's turf course. She could be a nice price with a chance to win if she can handle the class uptick.

Our handicapper ranks them like this in our Pro Subscribers' Bonus Commentary.

TINY TINA is making her third start after a layoff and should be at/near her best. LOSTINTRANZLATION has a win, show and place in her last three races on Santa Anita grass. HEATHERS GREY has two wins and a second in four Santa Anita races. BLUE DIVA tied for the highest, last race speed figure and has made up ground late in her last 10 races.