Sunday Stakes: Looking for an Upset in the Bay Ridge Stakes

A trifecta of stakes races dot Sunday's action. Aqueduct is home to the $100,000 BAY RIDGE STAKES and Fair Grounds runs two Futurity races, one for the girls and one for the guys. Figuring out what two-year-old horses are going to do from race to race is, perhaps, the most difficult if handicapping tasks.

One race they look like they challenge the likes of Secretariat for all-time great status, and then like an NBA seven-footer and a five-foot-tall jockey in a three-legged sack race in the next. Of course, we put our best handicapping skills to work in the two Louisiana Futurity races and feel good about our picks.

But… we'll bypass the terrible twos here today and take a deeper look at the BAY RIDGE STAKES. A field of seven fillies and mares will race 1 1/8 miles on Aqueduct's main track for the BAY RIDGE crown. OUR SUPER NOVA (PP: 5) is the heavy, morning-lien favorite at 4/5. The four-year-old is coming off a so-so effort in the Grade 3 Go For Wand Stakes, a well-beaten third in a mile on Aqueduct dirt. 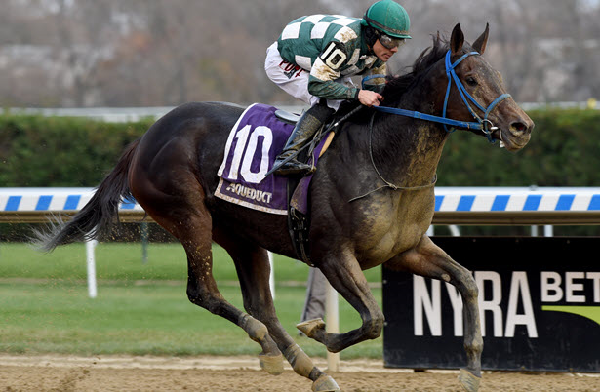 OUR SUPER NOVA at Aqueduct

Her fractions weren't sharp, and it was OUR SUPER NOVA's third race in a row with declining speed numbers. The Charlton Baker trainee has the look of a vulnerable favorite and horseplayers might consider other contenders, trying to find a better price.

We'll start with the rail horse, OUT OF ORBIT (PP: 1 ML 6-1). The Philip Serpe trained four-year-old runs hot and cold. She blew a tire in her last, finishing tenth of eleven, 24 lengths behind the winner. Kind of hard to get excited about that; however, OUT OF ORBIT wired the field, leading from gate to finish line at today's 1 1/8 miles on Saratoga's main track. 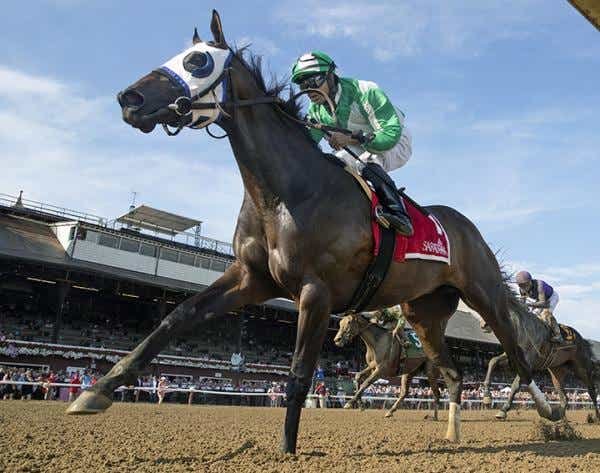 OUT OF ORBIT at Saratoga

When she get's out of the gate quick, she tends to do alright. She's also done will on Aqueduct dirt with two wins, three seconds and two thirds in nine starts. She should be able to add to her in-the-money record as CARTWHEEL (PP: 7 ML 10-1) might be the only horse to challenge OUT OF ORBIT for the lead.

FIGHT ON LUCY (PP: 2) could be a live longshot at 30-1 morning-line odds. She took home the bronze in her last start despite having her path altered in the last furlong. She's stepping up in class from a $64,000 Allowance race and making her first start at more than 7 furlongs.

You might be wondering why FIGHT ON LUCY might defy the odds today? She's made up ground late in her last three starts; so, the extra distance could work to her liking. But what really caught our eye is that she kept pace with faster early fractions despite adding a half furlong. Finally, she's hit the board in four of five at Aqueduct. If there was ever a day to get her second win, today could be that day.

MRS. ORB (PP: 6 ML 6-1) is our third potential challenger to OUR SUPER NOVA. Jockey Dylan Davis will try to steer MRS. ORB to her fourth consecutive win and fifth in six starts. Like FIGHT ON LUCY, she's saved her best for last, running by horses late in five of her last six outings.

On its past-performance paper, her recent record warrants more consideration than 6-1 odds; however, MRS. ORB is taking a step up in class from a $75k Allowance start and fractions where much slower in her last start. Now, that can be taken as a positive or negative. On the plus side, closing into slow fractions is tough work. She did the tough work and still scored. On the negative side, she might not be able to catch better horses in a higher-class race if the BAY RIDGE STAKES is run at a modest pace, which is likely with only two pacesetters.

Here is how our handicapper put them in order for our Pro Subscribers:

OUT OF ORBIT has finished in-the-money seven on nine at Aqueduct. OUR SUPER NOVA is dropping in class after a third place G3 run. FIGHT ON LUCY ran better early fractions in her last race despite adding a 1/2 furlong. MRS. ORB has won three in a row and four of five.