"The idea that I [should] trust my eyes more than the stats, I don't buy that because I've seen magicians pull rabbits out of hats and I know the rabbit's not in there" - Billy Beane, General Manager Oakland A's.

Like Beane, horseplayers can use the numbers to find biases/edges at their favorite track(s). Uncovering open secrets of how a racecourse plays can help handicappers pick more winners. This week, we break down the data at Belmont Park using race length and surface to identify winning trends.

(Our focus is on main track sprints with at least 10 races during the current Belmont Park meet.)

Post Position: Don't be fooled by the rabbit for posts seven and out no matter how good a horse looks on paper. Of the 48 races, only two found the winners' circle breaking from the seven spot and out. That's just 4.2% or roughly the same as 20-1 odds. 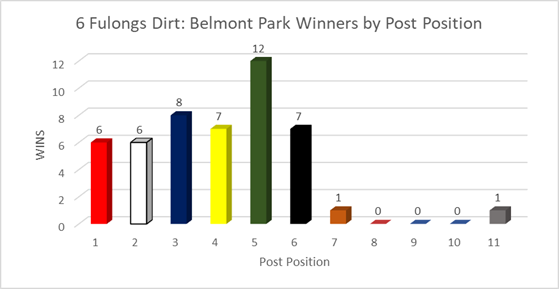 Running Style: As it is with modern racing, speed kills. Get to the quarter-mile marker first, and your horse has a 33% chance of winning. That's the same as 2-1 odds. Have a speed demon that's higher than 2-1? Play him/her, probability says it's a good bet.

On the flipside, stay away from any horse that usually runs outside the top four early on. Late runners are 84.4% losers. 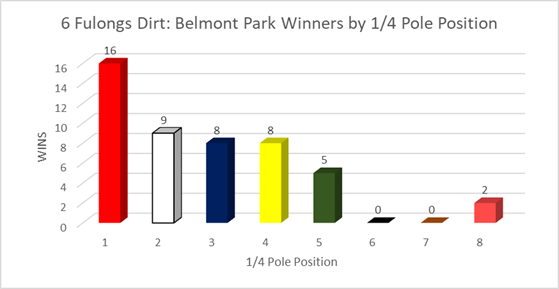 Jockeys with Multiple Wins: Kendrick Carmouche stands out at the distance/surface. 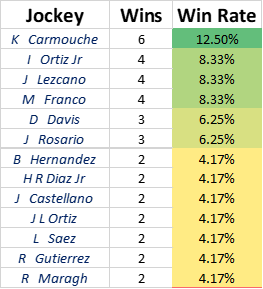 Post Position: The draw doesn't have much of an impact on outcomes, except of the O for 24 unlucky sevens. The rail won the most with five, but the three, five and six are right behind with four. 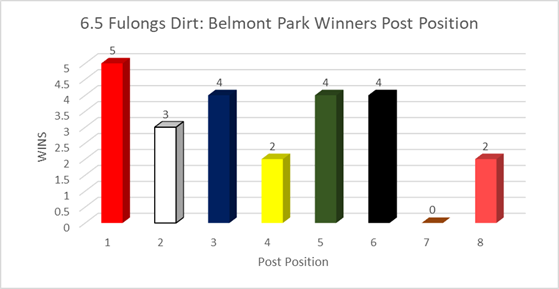 Running Style: Based on the results so far, three is good company. Nearly half (11) of the 24 winners at the distance/surface ran third in the opening quarter mile. In our opinion, a 45.8 winning percentage (6/5 odds) is too high to be a coincidence. It appears more likely to be a strategy.

If the three continues to come home at the same pace, it's layup to put a few dollars to win at odds of 6/5 or higher. 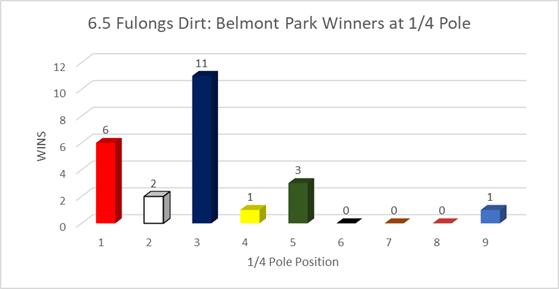 Jockeys with Multiple Wins: The two winningest jocks won eight of the 24 (33% or 2-1 odds), with the top three riders combining for 11 of the 24 Ws (45.8%). Clearly, these gentlemen have an edge on the field at the distance. 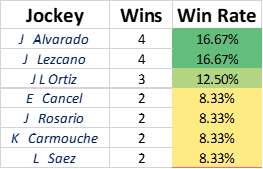 Post Position: Despite playing somewhat evenly from one through eight, the inside three spots won 13 of the 26 (50% or even money odds 1-1) races at the distance; so there is a slight advantage to drawing red, white or blue. For some reason, the seven struggles as it only has one win at 6, 6.5 or 7 furlongs.

Once again, horses outside the eight post might not be the best bet on the top of your tickets. 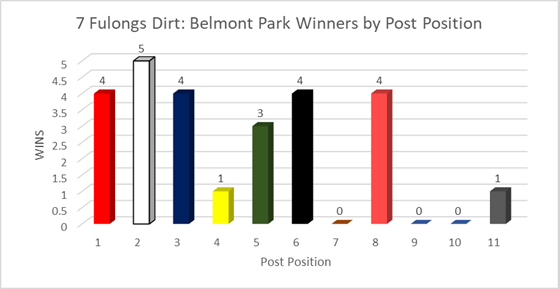 Running Style: The front of the pack is where the eventual winners are at. Sixteen of the 26 (61.5% or close to 3/5 odds) races ran within the first three spots in the opening quarter mile. As you can see in our graph below, seven (26.9% or close to 5/2 odds) managed to take the field wire-to-wire. 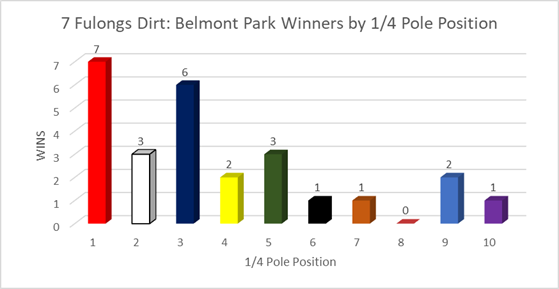 Jockeys with Multiple Wins: Four riders account for 14 of the 26 (53.8% approximately 4/5 odds) trips to the winners' circle. Clearly, horseplayers should check to see if any of the quartet are riding a horse that meets the 7 furlong post and 1/4 pole criteria when making their selections.

Captain obviously, the information laid out above is not the end-all-be-all when analyzing Belmont Park dirt sprints. However, incorporating the information should provide an edge and help you pull more rabbits out of the handicapping hat.