Belmont Stakes Picks: A Chance at History for WAR OF WILL

One hundred and fifty-two years ago, a filly named Ruthless won the inaugural Belmont Stakes at Jerome Park Racetrack in the Bronx. The race got its name from financier August Belmont, Sr. who put up the money for the first running. The race was moved to Morris Park in 1890 and then to its current home, Belmont Park in 1905.

The Belmont Stakes ran consecutively until 1911 when it was interrupted by the Hart-Agnew Law, an anti-gambling decree passed by the State of New York in 1908. The law was largely ignored due to a loophole interpretation that oral betting between patrons remained legal. A 1911 amendment to limit the liability of track owners and directors was defeated, shutting down every horse racing track in the Empire State.

However, horse racing was big business in New York back then, especially in Saratoga Springs. Many businesses shut their doors and went bankrupt due to the heavy-handed law. But all's well that ends well. Racing returned in 1913 when a New York court ruled oral betting legal and that the Hart-Agnew law only applied to bookmakers.


On to the Triple Crown

As the third and final leg of horse racing's Triple Crown, legends can be born if they sweep the Kentucky Derby, Preakness Stakes, and the Belmont Stakes. SIR BARTON was the first to accomplish the feat in 1919. Since, a dozen others have added their names to horse racing folklore as Triple Crown Champions. 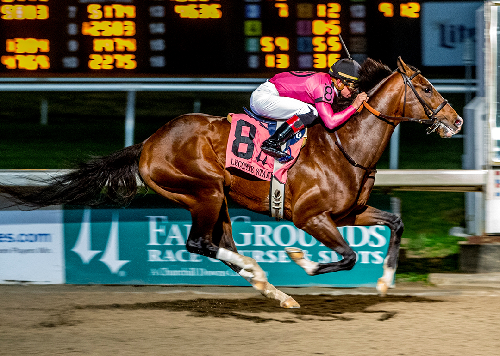 War of Will winning at Fair Grounds

WAR OF WILL can join an exclusive club of 34 other horses that won two of the three Triple Crown races but did not enter the Belmont Stakes with a chance at glory. As is well documented and controversial, WAR OF WILL had a shot in the Kentucky Derby but ran up on and into a swerving, possibly lane blocking MAXIMUM SECURITY. The contact effectively ended WAR OF WILL's derby hopes and shot at the three-race sweep. He drove home for the Preakness crown and takes his talent to New York.

This year, a field of 10 will race the grueling 1 1/2 for the carnations. Oddsmakers have put the favorite tag (and jinx?) on TACITUS (PP:10) at morning line odds of 9/5. His trainer, William Mott, and bettors will want some other horse to hold the mantle of post-time favorite as only four of the last 20 winners left the gates as the public's choice.

Besides the other nine horses, TACITUS will also have to overcome the curse of 10. Since 1999 (maybe earlier), no horse has made his/her way to the Belmont Stakes winners' circle wearing the purple 10.

Our handicapper believes TACITUS will find his way into the money and that WAR OF WILL will join the other 34 to win two legs of the Triple Crown. From our Pro Subscribers' bonus commentary:

"WAR OF WILL has won every dirt race where he didn't have an excuse. He should get a clean trip with only a few horses in front of him at the start and all the main competition behind. INTREPID HEART is getting blinkers for the first time to help at the start. Trainer, Todd Pletcher's horses win at 20% when trying eye-gear for the first time. TACITUS has finished either first (3x) or fourth (2x). He showed well in his last race at the Kentucky Derby and put in some good works at Belmont since. TAX has posted three triple-digit speed figures. The rest of the field has three combined. He had the lead on TACITUS in the stretch of the Wood Memorial and could hold it this time in his third start off a layoff."

Perhaps, if WAR OF WILL* wins, he'll deserve an asterisk next to his name as a de facto Triple Crown winner for what could have been.

Make sure you get all our Belmont Stakes Racing picks (10 of them on the card) analysis, early speed outlook, suggested bets and more in our 2019 Belmont Stakes Wagering Guide.

GET OUR FULL CARD BELMONT STAKES PICKS AND WAGERING GUIDE!