Like the seasons, the annual Triple Crown Series comes and goes. It's hard to believe, but the final leg of the 2019 Triple Crown, the Belmont Stakes, is this Saturday. Avid horseplayers around the world circle the first Saturday in May in anticipation of the Kentucky Derby, then the Preakness, and then the Belmont Stakes.

Like a roller coaster, when it's over, there is a feeling like "that was quick". Ahh, but we aren't at the end of the ride just yet. The Belmont Stakes still has its twists and turns before hitting the air brakes on this year's Triple Crown.

To make the final leg of the ride more enjoyable, we looked back at the last 20 Belmont Stakes races to build "The Profile of a Belmont Stakes Winner." A few things popped off the excel sheet in a hurry.


Number One: The Belmont Stakes is a Chalk-Buster

Only four favorites managed to hit the wire first in the last 20-years: JUSTIFY in 2018, AMERICAN PHAROAH in 2015, AFLEET ALEX in 2005 and POINT GIVEN in 2001. Interestingly, three of the four were trained by Bob Baffert with Timothy F. Ritchey taking home the other with AFLEET ALEX. Since neither man has a horse in the 2019 Belmont Stakes field, history says to look past the post-time favorite as your winner.

According to BetOnline.ag's pre-race odds, TACITUS is the early favorite at 9/5 odds. If the William Mott trainee is chalk on Stakes day, history says to take him (or whichever horse is the public choice) off the top your ticket.

Just because the favorite fails to score at 80% doesn't necessarily mean he'll run off the board. Twelve of the 20 post time leaders finished in the top three: win 4x, place 4x, and show 4x. Ehh, but still, 40% of the bettors' top-choices ran out-of-the-money. That's a nasty miss rate; however, it opens the door for some fat payouts.

Just five Belmont winning horses since 1999 ran outside the front six in the opening quarter-mile. Based on field sizes, there were 89 entrants that ran seventh or more at the 1/4 pole. That's a hit rate of just 5.6% or roughly 17-1 odds. 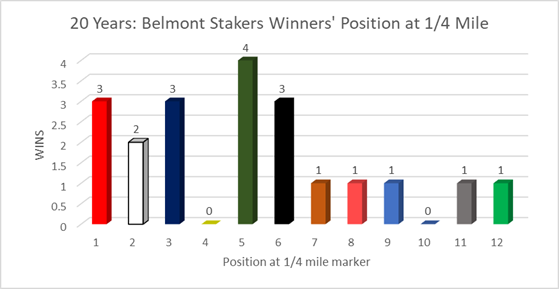 We did some analysis based on the last three races for the 10 horses slated to run in the 2019 Belmont Stakes. Here is how they would line up at 1/4 mile marker bases on the fastest, slowest, and average quarter mile times. 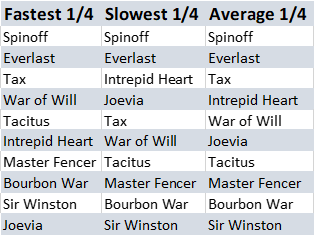 BOURBON WAR, MASTER FENCER and SIR WINSTON fall outside the top-six in all three categories. That doesn't mean that they can't win, just that history says the odds are stacked way against them (like 94.4%) should they get off to their typical slow starts.


Number Three: Post Position Means Nothing, Unless You are the 10

Despite all the talk you'll hear/read about once the posts are drawn, winners come from all over the starting gate, except for the 10. The three spot has the most wins in the last 20 years with three. The one, four, five, seven, nine, and eleven took home the prize twice. And the two, six, twelve, and thirteen came home once. Meanwhile, the ten is a twenty-time loser and another knock against the morning line favorite TACITUS. 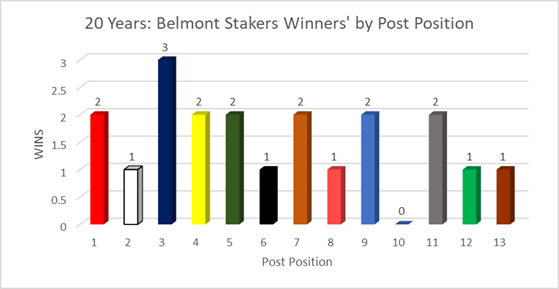 The winner will need to hit triple-digits on the speed meter. Nineteen of the last 20 (95% or 1/20 odds) to take the Belmont Stakes crown topped a speed figure of 100. The lone miss was a 99 by CREATOR in 2016. So far, only SIR WINSTON, SPINOFF, TACITUS and TAX have achieved the benchmark number. TAX has the most with three. The rest of the 100 club only have one each. The six that fall short of triple digits have come close, and with some improvement, any can hit a hundo.

By the process of elimination, only SPINOFF and TAX qualified by every measure laid out above. Of course, we'll handicap the Belmont Stakes from every angle and make our selections, analysis, pace set up, suggested wagers, and more available in the 2019 Belmont Stakes Wagering Guide.

GET OUR FULL CARD BELMONT STAKES PICKS AND WAGERING GUIDE!