It's a quiet Sunday of racing to end the Fourth of July weekend. We hope you had lots of food, fun, and winners! There are just four Stakes races with $100,000 or more on the line across the country and Canada today. They include:

Six four-year-olds will race 1 1/16 miles one Belmont's main track for the STATE DINNER STAKES. The distance and surface have been rough on rail-riders with the one horse coming home a handful of times in 40 starts, although both winners in the last week ran from the rail.

The morning-line favorite, BACKYARD HEAVEN draws the post at 9/5 odds. The Chad Brown trainee is dropping in class from the Grade I Whitney Stakes at Saratoga; so, he's been on the sidelines since August 4, 2018. He was in poor form before heading to the barn, losing by 28 lengths in the Whitney and by 10 lengths in the Grade I Stephen Foster Handicap at Churchill Downs. 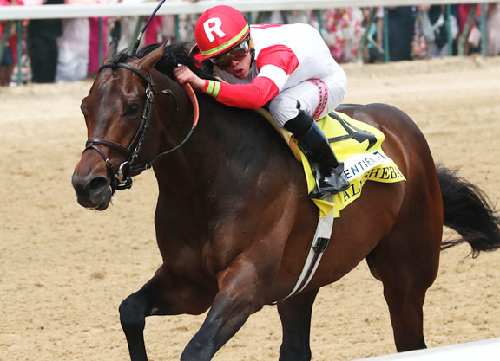 Any Chad Brown horse can't be overlooked, and BACKYARD HEAVEN's workout line suggests he'll be ready to run when he hits the track today. The big question is the time off. The previous longest layoff was four months, winning his comeback race by 1 1/4.

While BACKYARD HEAVEN was bombing almost a year ago, PRINCE LUCKY (PP: 2 ML 7/2) hasn't been close in his last two starts, both at Belmont. He's finished well behind the lead at 15 and 13 lengths, from most recent back. He did win in only one other start at Belmont in his last non-graded stakes effort. It was also at today's 1 1/16 miles.

While nothing in his recent form suggests he'll find his way to the winners' circle, he has won six of 12 starts and six of 10 on a fast track. The forecast calls for sunshine and most likely a fast surface. He could pop.

CANDYGRAM's (PP: 3 ML 3-1) last two starts are 180 degrees away from BACKYARD HEAVEN and PRINCE LUCKY. The James Jerkens trainee has won his last two in front running fashion, pulling away from the fields by 5 1/2 lengths.

His running style fits the bias at the distance/surface as early speed has won 10 of the 40 races during the current meet. BRICKYARD HEAVEN and PRINCE LUCKY are the only other horses in the group that likes to run near the lead early, but neither has taken the lead on a regular basis. They have run their best when riding shotgun. CANDYGRAM is likely the one to catch and will be hard to pass with lead in the lane.

It's hard to make a case for MULTIPLIER (PP: 4 ML 12-1) coming home first. He has one W in his last 12 starts, and that was more than a year ago on Santa Anita grass. He is making the switch today to dirt after running his last nine on turf. Trainer William Mott has won just 15 of his last 153 on the turf to dirt angle. On the plus side, two of MULTIPLIER's three wins came on fast dirt.

We'd pass on MULTIPLIER until he shows some life. Maybe the surface switch will provide the spark, but we'd want to see a little smoke before jumping into the fire.

JUST WHISTLE (PP: 5 ML 10-1) is another that is dropping in class after running poorly in his last couple of outings. He's stepping down from the Grade III Pimlico Special Stakes on May 17th. He had a rough start, being shuffled back early, starting 12th of 13 and 10 lengths back in the Pimlico Special. He managed to work his way to fifth at the finish line.

Hidden in the disappointing finish is some improvement in his 6 furlong and stretch fractions. His recent works have been blah leading up to returning to work after a 51-day hiatus, but he does have two wins and a second in four tries at the distance. If a longshot is going to come home first, JUST WHISTLE is the most likely candidate.

SUNNY RIDGE (PP: 6 ML 5/2) rounds out the field and looks to be the fittest horse now. He's put back-to-back triple-digit speed figures on the books as the only horse in the field to top the century mark in either of the last two starts. 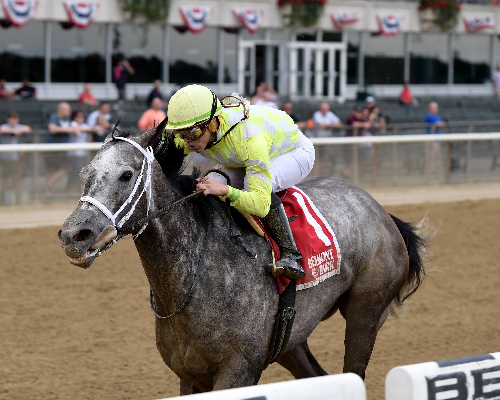 He's making his third start following a short layoff and winning his last race, the Grade III Salvator Mile at Monmouth Park. His trainer, Jason Servis, knows when to bring winners back to the track, winning after a win at a robust 34%.

SUNNY RIDGE is also a horse for the Belmont course with a win, three seconds and third in five starts. He also seems to prefer the distance with three wins and a second in four starts. In our handicapper's opinion, SUNNY RIDGE is the horse to beat.

“SUNNY RIDGE is a horse for the Belmont course with a win, three seconds and a third in five runs. CANDYGRAM is on a two-race win streak, making them both look easy winning by 5 1/2 lengths. BACKYARD HEAVEN's jockey/trainer combo of Irad Ortiz, Jr and Chad Brown have been in-the-money together in six of their last eight. PRINCE LUCKY is dropping in class after bombing in his last two.”