Blue Grass Stakes: A Shot at History for Swiss Skydiver

BONUS: In this episode of The Player's Edge, Rich gives us some live longshots at Belmont, Del Mar and Keeneland, along with our picks for the Grade I Ashland and Jenny Wiley Stakes leading into the Blue Grass Stakes.

SWISS SKYDIVER (PP: 7 ML 3-1) will try to do something no other filly has ever done, win the Blue Grass Stakes at Keeneland racetrack. She's only the second female to try in the 109-year history of the race. If she wins, SWISS SKYDIVER will be eligible for both the Kentucky Derby and the Kentucky Oaks. She's currently number one on the Oaks leaderboard with 310 points, she's in. The Blue Grass crown will give her 100 Derby points as it's a Kentucky Derby qualifier (first gets 100, 40 for second, 20 for third and 10 for fourth). 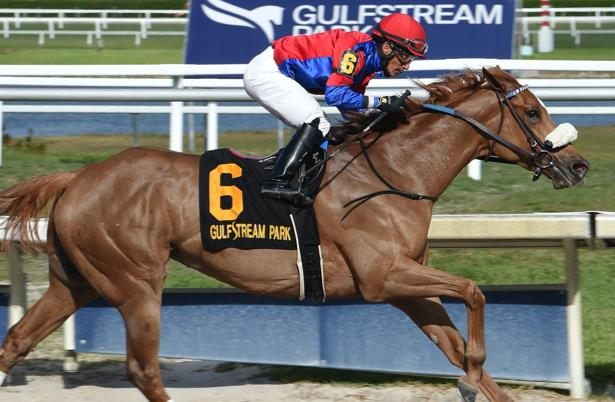 Although history isn't on her side, the daughter of DAREDEVIL is one of a trio of horses that best fit the profile of a Blue Grass champ since the track switched back to dirt form a synthetic surface in 2015.

Right off the pace runners won four of the five since the surface makeover.

All but one ran at least one triple-digit speed figure in the three races prior to the Blue Grass Stakes.

Only one, CARPE DIEM, won their start before the Blue Grass.

Three of the five to wear the Blue Grass Crown were the post-time favorite. Including the last two.

SWISS SKYDIVER is on a three-race win streak with triple-digit speed figures in two of them. Trainer Kenneth McPeek's horse has been no worse than third after 6 furlongs in her seven, lifetime starts. We are a bit concerned that she might need a rest as she took a small step backwards in her last race. The Blue Grass will be her sixth start without a break. She'll need to be at her best to make history.


ART COLLECTOR also won his last three starts, trying for the top, last race speed figure. He could take a step forward Saturday afternoon in his third start off the break, a 24% winning angle for trainer Thomas Drury, Jr. The son of BERNARDINI tried a dirt route for the first time in his last race, ending with a win and his lone triple digit speed number. Many times, horses show more in the second try at a mile or more, lookout if he does.

RUSHIE is the other to tie for the highest last race speed figure in a third-place finish behind HONOR A.P. and AUTHENTIC in the Santa Anita Derby. Losing to that pair isn't something to be ashamed of as they are the second and third choices to win the 2020 Kentucky Derby, according to the most recent Kentucky Derby Future Odds pool. (HONOR A.P. 6-1, AUTHENTIC 11-1, TIZ THE LAW is the top choice at 2-1.)

ENFORCEABLE missed the board just once in his six starts on a fast track. It's been hot and humid in the Midwest. It's supposed to be 88-degrees and sunny on Saturday; so, the surface should be hard and fast. A fifth-place finish in the Grade II, Louisiana Derby in his last race was the lone off the board run on a fast track. A slow start hurt his chances to make it six for six. Trainer Mark Casse has been hustling him out of the gates in workouts since in hopes to get off to a better start in the Blue Grass. 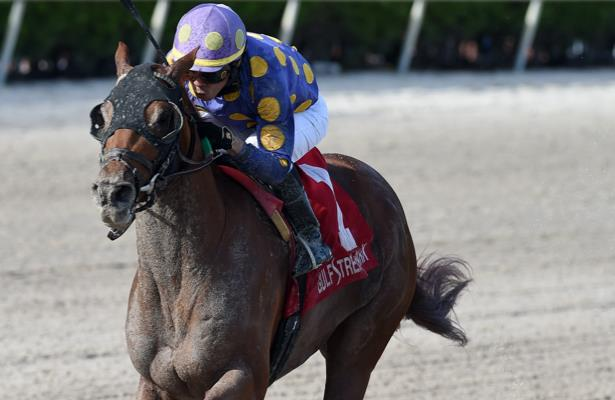 Shivaree in the Florida Derby at Gulfstream

SHIVAREE rides the rail, which is winless in seven races at the distance, meet to date. He improved his fractions noticeable in his most recent effort and first following a brief stint in the barn. Faster fractions can point to a big race the next time out and SHIVAREE made a huge step up in performance in his previous second start after a layoff.

MAN IN THE CAN's record cannot be overlooked. He has four wins in five races, including one at today's distance. He's moving up in class from a $75k Optional Claiming win. His early fractions were eh and the final time almost good enough to find the Blue Grass winners' circle.

Our handicapper expects SWISS SKYDIVER to be close but fall short of history in our Pro Subscriber's Bonus Commentary:

RUSHIE tied for the top, last race speed figure and could step forward in his third start after a layoff. SWISS SKYDIVER will try to be the first filly to win the Blue Grass, tough task. ART COLLECTOR is on a three-race win streak and none of them have been close. ENFORCEABLE has hit the board in five of six on a fast track, got off to a slow start in the lone miss.

SWISS SKYDIVER is away; so, the other ladies get to play, and get paid.

SWISS SKYDIVER has such a big lead on the rest of the ladies competing for a spot in the 2020 Kentucky Oaks that she's trying out for the Kentucky Derby in the Blue Grass Stakes. None of the half-dozen running in Keeneland's Ashland Stakes will earn enough points to pass SWISS SKYDIVER on the leaderboard when the Ashland goes official, but the winner is a lock to earn a spot in the Oaks (first receives 100 points, 40 for second, 20 for third, and 10 for fourth.)

VENETIAN HARBOR (PP: 2 ML 6/5) caught our eye in her second race when she won by 10 lengths to break her maiden at Santa Anita. We marked her as a horse to watch as her maiden score was on par with Stakes winners. Well, here she is currently tied for 10th on the Kentucky Oaks qualifying list and has a chance to move into second place as the Ashland Stakes champ.

That's exactly what we believe is going to happen. VENETIAN HARBOR's only dirt loss is to SWISS SKYDIVER where she gave up the lead in the stretch to finish a well beaten second of 14 in a fast race. Horseplayers made her the favorite over SKYDIVER that day. VENETIAN HARBOR should bounce back into the win column as trainer Richard Baltas hits at 29% the next time out with beaten favs.

Our second choice appears overlooked by the oddsmaker. TONALIST'S SHAPE (PP: 5 ML 6-1) has won six of her seven lifetime starts and most haven't been close. Yet, she's the second longest shot on the board. Her performance in the lone miss had the markings of a tired horse as she didn't run her typical stalking style. She got off to a slow start and was never in it. TONALIST'S SHAPE got back to her winning ways in a non-graded tune up in her last effort and has been training like a champ since.

BONNY SOUTH (PP: 3 ML 5-1) has done nothing but get better race after race in her four starts. Most likely the daughter of MUNNINGS has already qualified for the Kentucky Oaks, currently second in points with 100. Her last two starts were at the Ashland Stakes distance of 1 1/16 miles and she won both with closing efforts. Pace could be an issue as VENETIAN HARBOR is the only consistent frontrunner in the group. If the morning line favorite can get away with moderate fractions, it could be difficult for late runners to chase her down.

SPEECH (PP: 6 ML 2-1) is the second choice in the program. Second is a place she's called home in her last four starts, but she wasn't close to taking the checkered flag in three of them. To be fair, she was the runner-up to some of the best three-year-old fillies in her last three outings; SWISS SKYDIVER, GAMINE and DONA VELOCE, all of which are likely to run in the Kentucky Oaks. Looking at her past performances, she appears to a very good horse but lacks that something special up against top contenders. SPEECH will likely be in the mix; however, we just don't think she'll have what it takes to take the wire before one of our top three picks.