It's a restful Sunday of stakes racing with just one on the calendar with a jackpot of $100,000 or more, the Bouwerie Stakes. A field of seven will fight it out for 7 furlongs on Belmont Park's main track. There have been four races at the distance with all of them won by speed horses.

Although our favorite to win the Bouwerie is not a front runner, CRITICAL VALUE (PP: 1 ML 6/5) is a stalker and shouldn't be too far behind the leader(s). The daughter of BODEMEISTER offers one of our favorite handicapping angles, she's dropping in class after recording the highest, last race speed figure. She has one run on the Belmont course, a W. She should come off the bench sharp following a bunch of fast workouts. 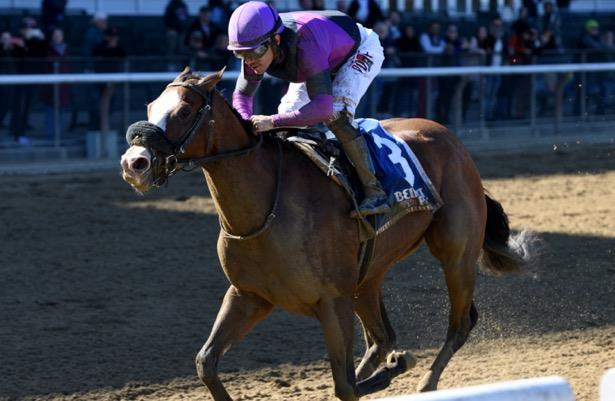 ILCHESTER CHEETAH (PP: 2 ML 6-1) has won half of her races, visiting the winners' circle in five of 10 efforts. Four of the five Ws were of the wire to wire style. Horseplayers with money on the two should know right away. If she breaks sharply and is first or second at the quarter pole, she's never missed to board, Anything else, and she's in trouble.

NAKED AVENGER (PP: 3 ML 8-1) seems to prefer the northeast more than the southeast. Her first three races were in New York, winning her debut at Saratoga, followed by a win and place in two at Belmont. Then, she tried her luck at Gulfstream, running poorly in a pair of races. Now, she's back to Belmont where her win came at today's distance. She offers good value if she can run back to her New York form.

RISKY MISCHIEF (PP: 4 ML 3-1) is making her third career start. So far, it's been a tale of first and almost worst. She won her debut on the lead, smashing a field of 10 by 7 1/2 lengths at Saratoga. In round two, she tried the Grade I, Spinaway Stakes. It didn't go well; she crossed the tape sixth of seven by 10. We expect to see the debut version as her training has been strong heading into her first race following 10 months in the barn.

COURAGEOUS GIRL (PP: 5 ML 10-1) hasn't raced since February 23rd. Her workouts have been blah leading into today's start. On the plus side, she won her last race following a layoff and has two seconds in a pair of Belmont races. She should be near the lead early but tends to fade when pressured. She was able to shake free in her lone win and probably won't get an easy lead in the Bouwerie.

BIG Q (PP: 6 ML 7/2) has been mostly average with two good starts in her six races. She's been on the sidelines since January and most of her recent workouts are more like her typical performances, average at best. However, like her limited racing career, she sprinkled in a couple of stellar training sessions. If she gets off to a fast start, she's going to be in the mix. Otherwise, expect another OK run, but nothing special.

Here is how we rank them in our Pro Subscriber's Bonus Commentary:

"CRITICAL VALUE is dropping in class after posting the highest, last race speed figure. ILCHESTER CHEETAH has won five of 10 starts and recent work suggests she'll be sharp today. If RISKY MISCHIEF can run back to her debut form two races ago, could take them gate to wire. NAKED AVENGER has a win and place in two Belmont efforts."