Sunday Stakes: GUARANA Brings the Heat in the Coaching Club

Tell me can you hear it? Glenn Frey's The Heat is On East Coast horse racing style.

The heat is on, on the track
Only Inside your head, every hoof beat
And the hoof beat's not loud, no racing inside
The pressure's high, to keep racing alive
'Cause the heat is on

Yes, the heat was on yesterday with temperatures breaking the 100-degree heat index across the northeast. As a result, Delaware Park, Finger Lakes, PARX and Saratoga cancelled Saturday racing. Hopefully it's a bit more comfortable today and horses can get back to the track.

Due to Saturday's cancellation, Saratoga's Saturday card was moved to Sunday, adding a 2 1/16-mile steeplechase race as the first and bookending the card with the $200,0000 Grade III SHUVEE STAKES. Honestly, the nearly identical past performance sheets were beyond confusing.

The SHUVEE Stakes is named after the second filly to win the American Triple Tiara of Thoroughbred Racing or the NY Triple Crown: The Acorn Stakes at Belmont, the Alabama Stakes and the Coaching Club Stakes, both run at Saratoga.

The Coaching Club was scheduled to go yesterday but was moved to today. It features five three-year-old fillies running 1 1/8 mile on Saratoga's main track.

GUARANA breaks from the rail as the heavy, heavy, 2/5 morning-line favorite. The Chad Brown trainee has two career starts and neither have been close. She broke her maiden at Keeneland on April 19th by 14 lengths in a field of 10. She returned to the track on June 8th to destroy the Grade I Acorn Stakes crew by 6 lengths. So far, she's the MC Hammer of horses: you can't touch this. 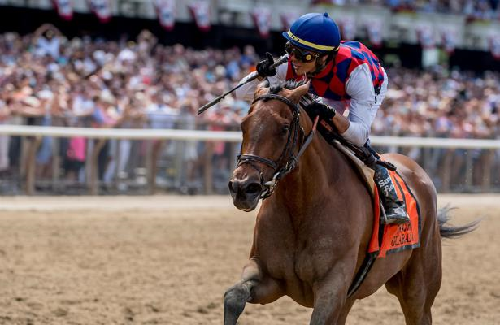 If GUARANA is MC Hammer, then POINT OF HONOR (PP: 5) is Rodney Dangerfield. The Black-Eyed Susan winner is the second choice at 7/2. The oddsmaker doesn't think she or any of the other three horses stand a chance.

However, POINT OF HONOR owns the highest last race speed figure, but her running style might not be the best fit for Toga. She tends to come from off the pace, making her move after the half-mile marker. Saratoga races at the distance/surface have favored early speed with seven of nine winners.

BOXWOOD (PP: 3 ML 12-1) is the most likely early challenger to GUARANA. She's been in or near the lead in four of her five efforts. Trainer Eddie Kenneally's horse is taking a BIG step up in class after finishing second by a neck as the chalk in her last race. The good news for BOXWOODsupporters is that Kenneally bounces back at 27% the next time around the track with beaten favorites. 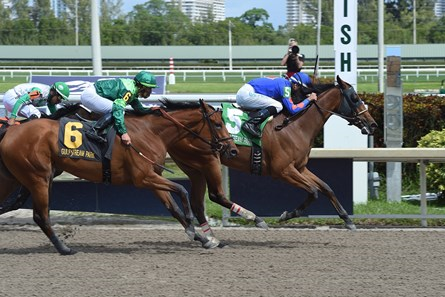 Champagne Anyone at Gulfstream Park

CHAMPAGNE ANYONE (PP: 2 ML 4-1) finished seventh in the Kentucky Oaks in her last start. She returns to work for her ninth race, her first in two-and-a-half months. Trainer Ian Wilkes only wins at 13% with horses coming off breaks of 46-90 days and CHAMPAGNE ANYONE is yet to win a first start. She finished third in her debut, fourth after a six-week break, and third following three months in the barn. Her history shows she'll be better in rounds two and three than one.

OFF TOPIC (PP: 4 ML 20-1) fills in the field. She finished fifth in the Black-Eyed Susan in her last race. She could offer value at 20-1 morning-line odds. Prior to her dull effort at Pimlico, she hit the board in five consecutive starts, finishing 3rd, 2nd, 1st, 3rd, and 2nd, from the most recent back. Her speed figures are on par with all the others except GUARANA.

GUARANA is the horse to beat, according to our Pro Subscribers' Bonus Commentary:

"GUARANA has two races and two wins, including a G1 in her second start. Neither race was close, winning by 6 and 14 lengths, from most recent back. POINT OF HONOR has the highest last race speed figure in winning the Black-Eyed Susan at Pimlico. CHAMPAGNE ANYONE has finished in-the-money in six of her seven fast surface starts (7: 3-0-3). OFF TOPIC failed to fire in the Black-Eyed Susan but finished no worse than third in her previous five starts."

Hopefully, the heat is off and the racing is back on.