Captain Obviously, the DEL MAR MILE is one mile - on turf. The field is packed with 11 runners, three-years-old and up. It's a good betting race as BOWIES HERO (PP: 5) is the soft morning line favorite at 5/2 odds.

BOWIES HERO should be a factor as he posted the top last race speed number in winning his last effort. It was also his first start after nearly a two-month rest. The speed number was also just a touch below HERO's all-time best. We like both of those angles. He should be considered as a possible winner. 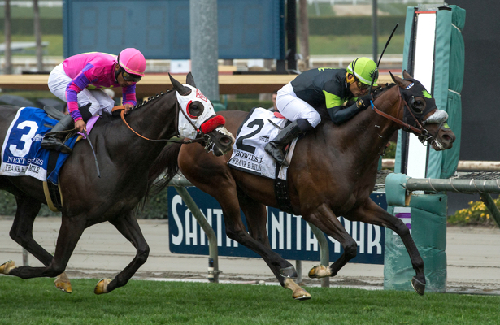 BOWIES HERO's closing running style also fits Del Mar's 1 Mile turf bias. Seventeen of the 31 winners at the distance/surface were either stalkers or closers. Other off the pace types in the field include:

You can probably eliminate PRINCE EARL and MAJESTIC EARL from consideration for the top of the ticket. The rail has won only once in 31 races at distance/surface. Posts two and three combined for three wins. DOUBLE TOUCH doesn't look like a winning option either. His speed numbers don't fit with the top contenders, and trainer Dan Blacker is yet to win a Graded Stakes race in 2019, going OH for 11.

GRECIAN FIRE has won every other race in his last five starts. He won his last, so he won't visit the winners' circle today if the pattern holds. The distance has been a problem for him, winning once in seven tries and missing the board in the other six. He could make it two of eight, but we'll pass.

SHARP SAMURAI's jockey and trainer combo have been rocking. Joseph Talamo and Mark Glatt have won four of their last six races together with a third. SAMURAI has performed well at the distance and at Del Mar. He has two wins, a second, and a third at 1 mile; two wins and two seconds at Del Mar. SAMURAI is always close at the end and should be viewed as a contender.

EL PICARO has two races in the states after starting his career in Chile. In the first run, he closed. He was on the lead in his second run. It's tough to tell which style jockey Drayden Van Dyke will choose. In Chile, he won five and finished second twice in seven races but hasn't hit the board in the US. EL PICARO is undefeated at 1 Mile on grass and should be at/near his best in his third US start. He's probably not a threat to win, but finishing in-the-money is a possibility. 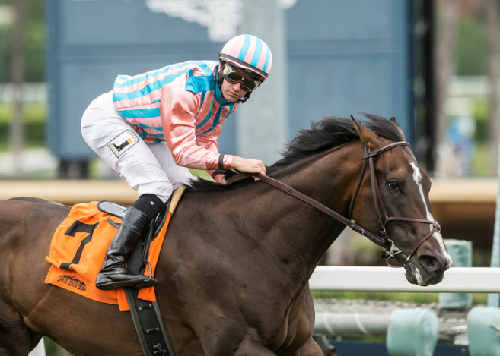 BOMBARD is making his third start after a layoff, a 16% winning angle for trainer Richard Mandella. The trainer also wins at 16% when his horse won the previous race. BOMABRD won his last race at Del Mar and at today's distance/surface. He's won four of his last seven starts and finished second by a head in another. He had a minor excuse to the other two.

WHAT A VIEW is making his second start for trainer Philip D'Amato and his second start off the bench. D'Amato wins at 23% with horses making their second start for the trainer and at 21% following a layoff. WHAT A VIEW typically gets to the front and tries to wire the field. However, he's faded in the stretch in six of his last 10 starts. He could win, as he's done in six of 16 races at the distance, but his history of fading is concerning.

BOLO won his last race, going wire-to-wire at Santa Anita, 1 mile on grass. It was his second race following a 10-month layoff. He hasn't raced since the Santa Anita score on May 27th. Prior to his 2019 starts, BOLO was a stalker and not a frontrunner. He's won four of 10 at the distance and six of 16 on grass. His recent workouts suggest he should be sharp in today's start. He could factor as a legit contender.

OHIO is making his second start after a short break. He ran his lifetime best speed figure in his last start and first race in nearly two-months. He could improve in his round two. Meanwhile, his trainer Michael McCarthy doesn't enter too many into Graded Stakes races but wins at 20% when he does race at the highest levels. He looks like a live longshot candidate.