With more tracks opening, I feel like Bruce Willis' Die Hard character in the not so conventional Christmas classic move. Only, I'll clean it up "Yippee Ki Yay!" Horse racing's return makes me feel 10 feet tall and bulletproof. Surely, many horseplayers share the fervor.

It also feels great opening the Sunday stakes calendar and seeing a race with more $100,000 in prize money for the first time in what feels like forever - "Yippee Ki Yay!"

Santa Anita's Grade III, Desert Stormer Stakes gets the honors. A field of eight horses will race 6 furlongs on "the world's most beautiful track" for their share of 100 grand. The distance and surface has a big time speed bias with 41% of the winners taking the tape wire-to-wire. That's amazing.

We see a trio of ladies that could have a chance to take them from gate to wire, including a big name.

FIGHTING MAD (PP: 1 ML 4-1) won her last at Del Mar in a wire to wire effort. She pulled away from a field of seven to win by eight lengths in the Grade III, Torrey Pine Stakes. That was at 1 mile. She's failed to get the early lead in her previous four starts, all sprints. However, she rode shotgun to the frontrunner in three of the four, winning two and finishing second by 3/4 lengths in the other.

Her fractions suggest she'll be close to the lead again today and probably chasing the morning line favorite BELLAFINA (PP: 5 ML 6/5). She failed as the chalk in her last start at Oaklawn Park where she got off to a slow start in her first race in four months. 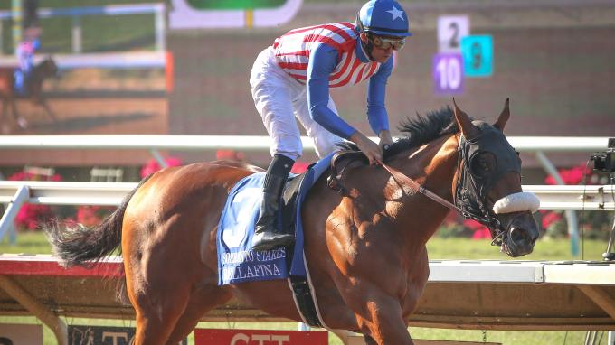 The four-year-old should be happy to be back in southern California after her weekend in Arkansas. BELLAFINA is clearly a west coast girl. She has four wins and two seconds at Santa Anita, a pair of wins at Del Mar in two races, and a second in her Los Alamitos debut. She's failed to hit the board in her four races outside of the Golden State. Expect her to have her track shoes back on today as she smoked a 4 furlong Santa Anita workout on May 10th.

Longshot, ARTISTIC DIVA (PP: 6 ML 15-1) has a pair of wire to wire Ws, including her lone trip at Santa Anita, which happens to be at today's 6 furlongs on dirt. In all, John Sadler's trainee has three races at the distance, winning two and finishing second in the other. The two wins came on a fast surface and the second on slop. In other words, she's yet to lose at 6 furlongs on a fast surface.

She has not faced anywhere near the level of competition she'll be up against in the Desert Stormer Stakes, but her previous fractions suggest she can hang with the speedsters from the jump. 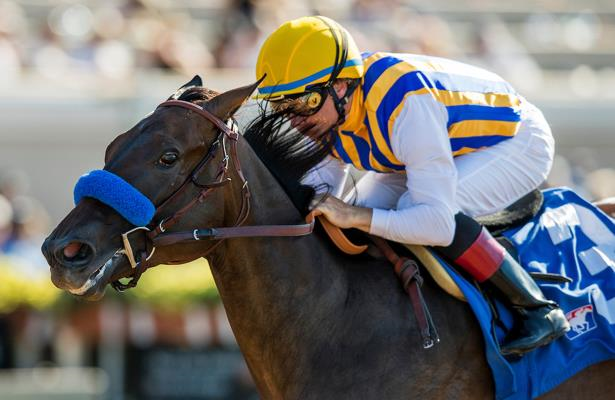 If none of the sprinters makes it to the winners' circle for a photo session, then sprinter turned stalker MOTHER MOTHER (PP: 3 ML 5/2) is the one most likely to track them down. She'll rate a length or so behind the leaders and step on the gas pedal when jockey Mike Smith asks for more coming out of the turn. She's never missed the board for trainer Bob Baffert on a fast track with three wins, three seconds and a couple of thirds in eight races. There is no rain in the forecast; so, she'll have her surface condition of choice.

We are highly confident that the Queen of the Desert Stormer Stakes is within those four horses. If not, we've got a sneaky longshot to consider. HANG A STAR (PP: 8 ML 20-1) probably won't get much love from horseplayers. She's stepping way up in class, her speed numbers pale in comparison to most others in the group and her trainer scores at just 5% in graded stakes company.

So why in the world would anybody even think about HANG A STAR? Well, she's been training like a monster with three bullet workouts since her last race, a 6.5 furlong win at Santa Anita. She showed major improvement in the score, running by far her best speed number. Perhaps, the recent W and string of fast workouts suggest she's found her form.

Here is how we rank them for the Desert Stormer Stakes: