The centerpiece race is the ninth, the $600,000 DUELING GROUNDS DERBY. Ten, three-year-olds will run 1 5/16 miles on Kentucky Downs Grass.

SOCIAL PARANOIA is the 2-1 morning-line favorite and draws the rail, which has one win in six routes. He's coming off a fourth-place finish in the $1 million Saratoga Invitational Stakes on August 4, 2019. The Todd Pletcher trainee only has one win in his last 10 starts, but did post the highest last race speed figure and has hit the board in seven of eight on turf. 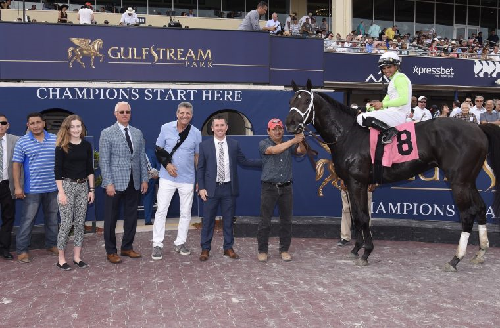 ARMISTICE DAY (ML 8-1) breaks from the two spot and is making his first start since winning a non-graded, $100k race on Woodbine's turf course. His trainer Barbara Marshall followed a win with another in five of the last 42 (12%) chances. His fractions improved in winning his second turf outing and his last three works are solid. He could be sharp in his return to work.

BUNDIBUNAN (PP: 3 ML 12-1) has made up ground in the stretch in four of his five turf starts. The only time he failed to run by horses late was his lone trip on a good surface. Firm, and he's picking 'em up and put 'em down heading to the wire. On the firm track, he's finished first, second, third and fourth (fifth on the good track, guess that means he'll finish sixth today?); however, he was bumped late and swung three wide line the G3 American Derby at Arlington, ending fourth by two. If he's close to the leader in the last 1/16th, lookout.

LIMONITE (PP: 5 ML 8-1) tried turf for the first time in his last effort. It was in the Hall of Fame Stakes on Saratoga's inner turf, which can be quirky with the tighter turns. He finished seventh of eight. But LIMONITE backers should take heart as trainer Steven Asmussen finds his way to the winners' circle at 24% with horses taking the second trip around the course on grass.

RY'S THE GUY (PP: 7 ML 6-1) may have tried to climb the ladder too fast. After breaking his maiden in his fifth attempt, he followed up with a $97k Allowance win, and then fell flat in an Arlington Park Grade I race, stumbling home eighth of nine. The allowance score was his first go-around on grass with a speed rating that's on par with all the other main contenders, except SOCIAL PARANOIA. If he can run back two races, he'll have a shot to fill in the back end of exotics.

JOURNEYMAN (PP: 9) looks like a potential overlay with morning-line odds of 8-1. If we had to guess, he'll be bet lower. He tied for the highest last race speed rating in winning the G3 Canadian Derby but got DQd into second. In fact, he's hit the wire first in three straight and finished second by a head and a neck in the two previous races. He's this I-----I close to a five-race winning streak and our pick to click in our Pro Subscribers' Bonus Commentary.

“JOURNEYMAN (RADAR) has three wins in a row and is a head and a nose away from five. SOCIAL PARANOIA has hit the board in six of his seven turf starts (7: 1-2-3). LIMONITE is taking to turf for the second time, a 24% winner for trainer Steven Asmussen. BUNDIBUNAN should be headed for the wire with a late rush.”