Our eye is on Ellis Park's ninth race as it features four horses that competed in 2019's road to the Kentucky Derby.

SUPER STEED finished the road to the Kentucky Derby tied for 34th place with 10 qualifying points. He has the rail in the Ellis Derby, competing in a field of 10 three-year-olds. He's dropping in class after winning a Grade III at Oaklawn Park on February 18th. The Larry Jones trainee hasn't run since capturing the Southwest Crown but has two consecutive bullet workouts at Ellis Park and should be sharp. However, his closing running style might not be the best fit. The distance/surface favors speed horses with 22 winners out of 30 races labeled early speed. The rail could mitigate some of the disadvantage as it's won at 17%.

GRAY MAGICIAN qualified for the Kentucky Derby, finishing dead last in the race, 26 lengths behind MAXIMUM SECURITY. He won his first race in his post-Kentucky Derby flop. GRAY MAGICIAN returned to the track in the Grade III Indiana Derby. He finished second, behind MR. MONEY, but recorded the highest last race speed figure for the Ellis Park Derby field.

The combination of dropping in class following the best last race speed figure is a strong angle. Add in trainer Peter Miller winning at 24% with horses making their second start off the break, and GRAY MAGICIAN looks like the one to beat.

HARVEY WALLBANGER joined SUPER STEED at 34th place in Kentucky Derby qualifying with 10 points. Although those who bet according to catchy names might put Harvey at the top of the list, he is also a closer and it's not the best fit.

He hasn't raced since May 4, 2019. However, his workouts have been solid leading up to today's first start in more than three-months. If you hear the Ellis Park track announcer call HARVEY WALLBANGER's name in the top three/four in the stretch, he'll have a great chance to visit the winners' circle.

KNICKS GO finished tied for 29th in derby qualifying, amassing 20 points. His running style fits Ellis Park as he likes the view from the front. In eight of his 10 starts, KNICKS GO was either first (3x) or second (5x) at the quarter pole. Typically, he holds his position through the 1/2 mile call, but tends to stagger to the finish line. 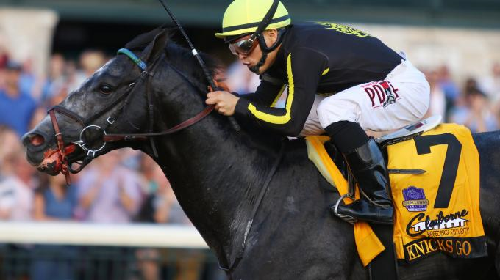 
Pace will be the key for KNICKS GO. He's not facing the fastest field and should be able to run his race. WHISKEY ECHO and CABOT are the only other horses that have a consistent history of running on/near the lead and neither are likely to run hot early fractions. Our handicapper believes the quarter of Kentucky Derby trail horses all have a chance to hit the board. From our Pro Subscriber's Bonus Commentary. "GRAY MAGICIAN came off the bench to record his best speed figure, highest for the last race and is dropping in class. KNICKS GO started his career with an easy win at Ellis. SUPER STEED won his last race and just put a bullet workout on paper. HARVEY WALLBANGER has the back-class to hit the board."