The last time COME DANCING (PP: 3) hit the track, the five-year-old mare won her first race after a layoff on a cloudy Saratoga Springs day. She made it home first despite being bumped and pinched at the start of the Grade I Ballerina Stakes. 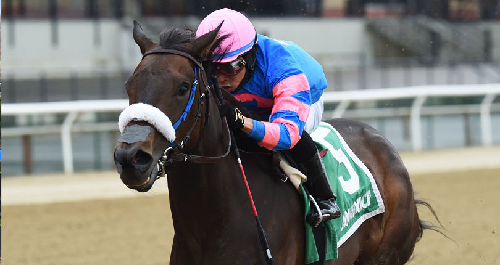 Jockey Javier Castellano asked COME DANCING to make her move in the upper stretch, snapped the whip a few times with both hands, and hand rode the Carlos Martin trainee to the wire for a 3 1/2 length win. She's making her fifth Belmont start, winning two of the previous four with a second, but failed to fire in the lone miss.

With morning line odds of 1/5, the oddsmaker doesn't believe she'll have much of a problem winning Belmont's Grade II, GALLANT BLOOM HANDICAP. Another score would make it two in a row and four of her last five starts.

MINIT TO STARDOM (PP: 5 ML 3-1) might be the only horse in the field with a shot to upend COME DANCING. The four-year-old is on a three-win race streak, which was preceded by three-second place finishes. In her last start, MINIT TO STARDOM ran the top, last race speed figure with the only triple-digit number.

In addition to setting her personal best speed score, she cut her final 6-furlong time by nearly a second, which is usually a good omen for the next start. MINIT TO STARDOM is making her first start since July 24th, but two bullet workouts show she's ready to get back to work. 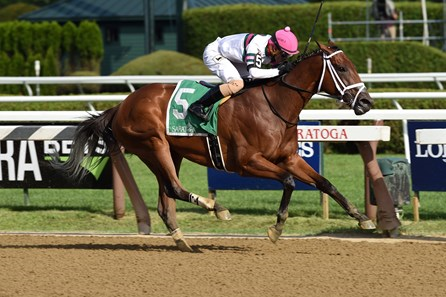 Minit to Stardom taking the tape at Saratoga

If MINIT TO STARDOM can't upset COME DANCING, then the challenge belongs to CARRERA CAT (PP: 2 ML 8-1). She's won five of her last six efforts, including her last at Saratoga in a $100,000 non-graded stakes race. It was a good effort too, as she too ran faster fractions despite adding a 1/2 length in her trip to the winners' circle. Trainer John Morrison wins after a win at 20%; however, CARRERA CAT is taking a big step forward in class.

MAJESTIC REASON (PP: 1 ML 20-1) and JC'S SHOOTING STAR (PP: 4 ML 20-1) round out the field of five fillies and mares. Of the two long shots, JC'S SHOOTING STAR looks like she has the best shot to find her way into-the-money. She's switching surfaces after winning her last on Belmont's inner turf course. She's alternated between the two surfaces in the last five races. She finished third and seconds in the previous two dirt races following a grass go, from the most recent back. JC'S SHOOTING STAR could spice up exotic tickets if she can complete the turf-to-dirt cycle a third time.

Our handicapper doesn't believe any will overcome COME DANCING in our Pro Subscriber's commentary.

COME DANCING has two wins and a second in four Belmont starts. MINIT TO STARDOM has won three in a row, which includes the highest, last race speed figure. JC'S SHOOTING STAR has finished in-the-money the last two times she switched from turf to dirt, just like today. CARRERA CAT has won five of her last six starts and is two for two at the distance.

Good Luck with the GALLANT BLOOM HANDICAP and at all the races!