Race of the Day: Breaking Down Race 11 at Gulfstream Park

Gulfstream Park is the only track running on Easter Sunday. The 12-race card does not include any stakes races. The 11th race offers the biggest prize pool, a $47,000 Allowance Optional Claiming (AOC) race.

A field of 10 fillies and mares will race 6 furlongs on Gulfstream's main track. Early speed has won 122 of the 172 races at the distance/surface with 60 going wire-to-wire into the winners' circle. The average winner is second at the quarter-mile call and has the lead after 4 furlongs. That, my horse playing friends, is a major bias.

Along with a speed advantage, post position has played a role in the outcome of 6-furlong races on Gulfstream dirt. Winning percentages fall from the inside out with the rail winning at a strong 18%. Post positions 2 through 7 win at even rates and then fall dramatically from eight and out.

JUST AIN'T RIGHT (ML 20-1) gets to wear the red 1 but lacks the early speed shared by 70% of the winners at the distance and surface. However, both of her wins were at 6 furlongs in three races at the distance.

FLAT AWESOME JENNY (PP: 2 ML 6-1) is a closer and will need to overcome the speed bias to find her way to the winner's circle, something she's done in three of her five Gulfstream efforts. She is a candidate to rally late and is our first Alternate pick. 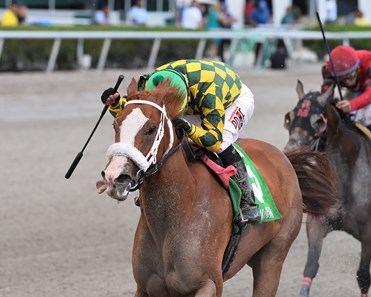 MS MESHAK (PP: 3 ML 7/2) chased the leader early in her last race, 5 furlongs on the grass in an apparent effort by trainer Joseph Orseno to switch up the five-year-old's running style. She flips back to dirt today and won with ease the last time she made the grass to dirt switch. We believe the same can happen today and is our top choice.

TAKE CHARGE EH (PP: 4 ML 12-1) hasn't raced on regular dirt in her seven career starts. She's run on turf twice and on Woodbine's synthetic surface five times. She flashed speed in three of her seven starts, but completely bombed in her last race, which was her first start in five months. We want to see a lot more from her before considering, pass.

GRAY OWL (PP: 5 ML 12-1) typically gets to the front and has success at the distance with three wins, three seconds and a third in nine races. However, she is showing signs of a tired horse, fading badly in her last race despite modest fractions. This will be her fifth start without a rest, and she's faltered badly in three of her last four starts, pass.

VARABASI (PP: 6 ML 8-1) has been on the lead in her last three starts but hasn't raced since last August. She took a similar break from August 2018 to May 2019 and won in her return to work. She's been training well with three bullets in her last four workouts. If she's ready, she could be dangerous and is our second alternative pick because you never know what to expect from a horse after such an extended break.

NAKED AVENGER (PP: 7 ML 6-1) has two wins and a second in her three starts. She broke her maiden in her debut at Saratoga and immediately moved into non-graded stakes races at Belmont Park. She hasn't run since October 19th but her recent works have been sharp. She could be the class of the field and is our third choice because this is the first time she's returning to the track after a layoff. Without any history, it's hard to tell how a horse will react in their first race off the sidelines.

GUACAMOLE (PP: 8 ML 4-1) recorded the highest, last race speed rating, which is roughly a 30% winning angle. So, she should be included in our top four selections, ranking fourth. She raced against our top choice two races back and finished 5 1/4 lengths behind MS MESHAK. Nothing in GUACAMOLE's last race suggests she's improved enough to change that outcome. 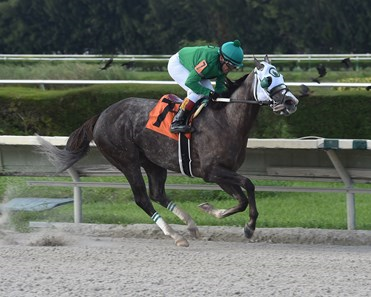 BACCARAT FASHION (PP: 9 ML 9/2) is making his first start for trainer Michael Maker after being claimed at this level in her last, where she finished a well-beaten third. Maker wins at a decent 14% in the first race following a claim. Her workouts have been strong since making the switch to Maker and she's run her best when on/near the lead. Her back-class ranks her as one of the top contenders if Maker can help BACCARAT FASHION return to form. We expect he will and she's our second choice.

FREUDIAN FINISH (PP: 10 ML 12-1) won her last at the AOC $35,000 level and is stepping up in class. She's been on the lead without much pressure in her last two starts; however, her fractions were average for the distance at today's level. She's struggled late when horses have challenged her and when she does not get the early lead. She will be challenged today, and her early fractions don't appear fast enough for her to get to the lead against other speed types to her inside. If she can clear the field by the turn, she could be dangerous, but we don't believe she will without running crazy fast fractions, pass.

Once again, here are our final rankings for Gulfstream's headline race for Easter 2020.