It's the first big day of stakes racing at the fall Belmont Park meet. Jockey Club Gold Cup Saturday features four stakes races with prize money of at least $200,000. On this page, we are going to cover the three Breeders' Cup qualifiers.

They first started running the VOSBURGH in 1940. It's six furlongs on the Belmont dirt for boys that are three-years-old and up. The Grade 1 affair is a "Win and You're in" Breeders' Cup Challenge race for the Breeders' Cup Sprint.

Early speed has played a huge role so far with Belmont Park, 6-furlong dirt races. Nearly two-of-three winners are what you would call upfront runners. To date, 54% of winners ran in the top three in the opening 1/4 mile and in the top two by the 1/2 mile marker. 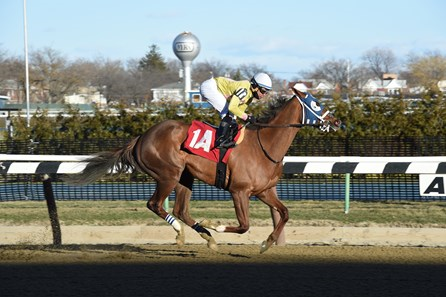 We think one might be fast enough early and offers great value based on the 54% bias mentioned above. From our pro-subscriber's bonus commentary, "STILL KRZ is the one that is most likely to get to the front out of the gate. He consistently puts 1s on his past-performance lines. IMPERIAL HINT should be close behind as he likes to run off the leader and make his move down the stretch. MANIACAL tries to be the lead dog but struggles if he doesn't lead the pack."

Our second "Win and You're In" Breeders' Cup challenge race is the eighth at Belmont, the $500,000 JOE HIRSCH TURF CLASSIC STAKES GRADE 1. The race has been around since 1977 and is named after the award-winning journalist Joe Hirsch. It's a long one at 1 1/2 miles on the Widerner Turf and will go off at about 4:42 pm eastern time. Eight horses will enter the gate with a chance to compete in the Breeders' Cup Turf.

It's the first such race at Belmont so we really need to put our handicapping skills to the test. There are no Bias cheats to help point us in the right direction. Looking at the field, we noticed a lack of early speed, as can be the case in longer races. That opens the door for one of the entrants to "steal" the race by getting up front, controlling the pace, and then sprinting to the wire.

It's possible the JOE HIRSCH plays out that way. Our handicapper says, "We are going to take a shot with CARRICK as he should be able to run the race he wants in what could be a slow early race. ROBERT BRUCE has eight wins in nine grass tries. How do you bet against that? HI HAPPY has a chance to be in the mix all the way around the track where early, moderate speed could play well. SADLER'S JOY has a strong late run, maybe the strongest in what's likely to be a pack of closers chasing the two or three upfront."

We wind up our Saturday Stakes with the marquee race of the day, the $750,000 JOCKEY CLUB GOLD CUP STAKES GRADE 1. It's the tenth race on the Belmont card and has been run since 1919. The winner gets a ticket to the $6 million Breeders' Cup Classic.

The talk of the Jockey Club Gold Cup is going to be Diversify, Diversify, Diversify. The five-year-old has won 10 of his 15 lifetime starts, most of which in impressive gate-to-wire fashion. His upfront style should fit as 25% of the 1 1/4 dirt Belmont runs have been won wire-to-wire.

And we see Diversify adding to the w-2-w totals. "As the saying goes, it's DIVERSIFY's race to lose. He's won 10 of 15 lifetime races. His only bad race in the last 10 came after a five-month break. That's not an issue today as he ran last on August 4th. MENDELSSOHN ran his best speed figure coming off a short rest. If he improves race over race, it could be enough to topple DIVERSIFY. UNO MAS MODELO is making his third start after a layoff. Last time he made three starts in a row, it was his best effort. The last two were 100 or better speed scores. Until GRONKOWSKI lives up to his hype and wins one in the US, we can't put him in the top tier."

There you have it folks, good luck at the races.