There will only be one, last automatic bid for the 2019 Breeders' Cup after Sunday's races. Eight of the nine remaining US-based Breeders' Cup Challenge Series races are on today's schedule.

The JUDDMONTE SPINSTER STAKES has the biggest jackpot and is the only Grade I on the roster. Five, fillies and mares will line up and run 1 1/8 miles on Keeneland's main track. According to the oddsmaker, ELATE (PP: 5) is heading to the Breeders' Cup Distaff on Saturday, November 2, 2019. 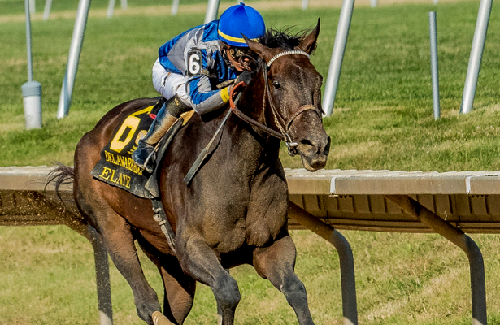 The five-year-old mare is the morning line favorite at 4/5 odds. She's been rolling for the past couple of years, finishing in-the-money in nine of her last 10 starts. The William Mott trainee has five wins, three seconds, a third and a fourth-place finish in the last two-years. A few more oats in the morning and she could have another two Ws as she missed by a nose in her last and by a neck six races back.

She could be tough beat as she cut her fractions noticeably in her last outing, which is usually a hallmark of good things to come the next time around the track.

DUNBAR ROAD (PP: 1 ML 2-1) will make sure ELATE earns the November ticket to Santa Anita. The three-year-old filly has four wins in five career starts. She finished second in the lone miss after being "bumped lightly" at the start. Otherwise, she's made easy work of the competition winning by 2 3/4, 2 1/2, 5 1/2, and 8 3/4 lengths, from the most recent (G1 Alabama Stakes) back. 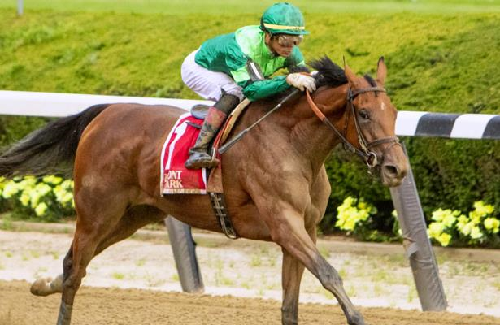 Like ELATE, DUNBAR ROAD's in-race fractions showed improvement in Saratoga's Alabama Stakes. She cut her 6-furlong time by almost a second despite running 3/16 miles longer. She is the main threat, in our opinion.

BLUE PRIZE loves, make that LOVES the distance. She has five wins, four seconds and a third in 11 races at 1 1/8 miles, which includes the highest, last race speed figure. The lone miss was in 2018's Breeders' Cup Distaff where she finished fourth after hopping at the start.

BLUE PRIZE (PP:2 ML 5-1) coming off a short rest and her works have been ehh at best. She's faced ELATE in two of her last three starts, finishing third by 4 1/2 lengths and second by 1 1/4 after being passed in the stretch. She should be competitive but is most likely racing for the show, maybe place money.

VEXATIOUS (PP: 3 ML 12-1) has spent most of her recent time on grass, racing on turf in eight of her last 10 starts. She did finish second in a $100k non graded stakes dirt run in her last effort. The five-year-old missed by a neck at the wire to BLUE PRIZE on Saratoga's main track while posting her personal best speed figure.

She could factor in the final decision, but most likely third or fourth at best.

SHE'S A JULIE (PP: 4 ML 8-1) has suffered from a case of thirditis, collecting show money in her last three starts. It's also her finish of choice at the distance, taking home the bronze in her three races at the 1 1/8 miles. She cut her fractions dramatically in her last start but faded hard late.

SHE'S A JULIE making her fifth start without a break. Her last result has the markings of a tired horse despite the improved fractions. We wouldn't be surprised to see her fade late again. The question is can she hold on for an in-the-money finish?

We see it as a two-horse race between ELATE and DUNBAR ROAD. Our handicapper gives ELATE the edge in our Pro Subscribers' Bonus Commentary.

"ELATE finished second by a nose as the public's choice last out. Trainer William Mott rebounds at 21% with beaten favorites. DUNBAR ROAD has four wins and a second in five career starts. BLUE PRIZE has hit the board in 10 of 11 at the distance. SHE'S A JULIE has three thirds in three starts at the distance."