Labor Day weekend might not have the same rep as the first Saturday in May for horse racing, but man-oh-man is this Saturday packed with $100,000+ stakes races, twenty-two of them. If you have a jones for some quality thoroughbred action, you'll get your fix on the first Saturday of September.

One of the most entertaining tracks delivering the goods is Kentucky Downs. The large fields, all turf races, and potential payouts give it a carnival like feel; a horse theater of the unexpected. Let's take a look at KD's four $100,000 or more stakes races.

The One Dreamer Stakes features a dozen fillies and mares, three-years-old and up, running one-mile and seventy-yards on the turf. This is a great bettors' race as the morning line favorite, ON LEAVE (PP: 11), is at 3-1. The right ticket(s) here could make for hefty payouts, even if the 11 hits the tape first, as we expect. 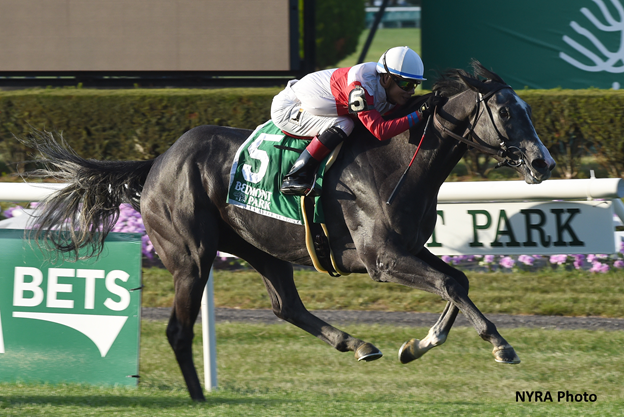 On Leave at Belmont Park

According to our bonus commentary, "ON LEAVE is on top of our ticket as she should improve in her second off a layoff. Last two same set-ups: win and 2nd by a 1/2." So, she's a length away from two consecutive wins when coming off the bench. In a sign ON LEAVE is ready to fire again, she put in a bullet work on August 25th. The fastest 4-furlong, turf time out of 41 horses at Saratoga.

To find out who we have behind ON LEAVE, Get our Full Kentucky Downs Picks.

The highest stakes race at Kentucky Downs is the $750,000 TOURIST MILE in race 8. The race features a strong favorite, MR. MISUNDERSTOOD (PP: 1 ML 2-1). The four-year-old has a nearly perfect record racing one-mile on the grass, six-starts and five-wins. Overall on the turf, he's got 10 wins in 13 tries. He's going to be tough to beat and it's likely that MR. MISUNDERSTOOD's post-time odds will be lower than 2-1.

We note, "As much as one might like to skip the chalk, he is likely to chalk up another in the win column. MR CUB has won all three of his 1-mile turf races but has finished behind our top choice three times too. BOUND FOR NOWHERE returns the US following a one race adventure in Great Britain, hasn't run past 6-furlongs. He's likely to be out on the lead, but does he have the legs for the added length? MASTER MERION has finished in-the-money 10 of his 11 turf races. Return to non-graded stakes looks like return to right level."

Moving on to race 9, the $400,000 KENTUCKY DOWNS JUVENILE STAKES, we have another race with great potential for fat winning tickets. The morning-line favorite, GOOD GOOD (PP: 3) checks in at 7/2. You can't get much more lukewarm than that.

The Juvenile Stakes features one of our RADAR Horses. They are horses with final times in their last race that rated above the level they competed at. Our RADAR ALERT on our tipsheet states, "HENLEY'S JOY romped around Ellis Park to break his maiden in "surging" style. Had the highest debut, turf speed figure in the field. If he improves in his second outing, should benefit from off the pace running style." She offers value at 6-1 morning-line odds, be it at the top of the ticket or anywhere in-the-money (ITM).

For our final act, we wrap it up with the $400,000 EXACTA SYSTEMS JUVENILE FILLIES STAKES in race 10, yet another bettors' bliss, 12 horses with the favorite, TWO SHAKES (PP: 3) at 3-1. Can it really get better than three out of four races with no clear, outstanding horse that dilutes the payout pool?

If our pony prognosticator is right on this one, you are going to get paid with another of our RADAR horses. We have a 12-1 on top of the fav on top of the second choice on top of a 6-1. It looks like this, "CITY DIVA one race on the turf, a one-mile, wire-to-wire win in what was a little faster than average pace for Ellis Park, $42,000 Maiden races. At 12-1 morning line, offers great betting value. TWO SHAKES was bet well in her Saratoga debut and maiden win. It looks like the extra distance, from 5.5-furlongs is the biggest question. MISS TECHNICALITY hasn't run since July 6th, when she broke her maiden in her debut, despite some trouble out of the gate. He appears to have a lot of late punch. LIGHTSCAMERAACTION is one length away from being undefeated in two grass races. Lone loss was to CITY DIVA."

GET OUR OPENING KENTUCKY DOWNS PICKS PLUS ALL OTHER TRACKS HANDICAPPED!