Ever been curious how it looks BEHIND THE SCENES of loading horses into the gate for a race? Check out the small clip below provided by our friends at Call2Post.com of the loading of Race #7 from Thursday:

What makes Kentucky Downs fun is the large fields, full of evenly matched horses. It makes for anything can happen racing with some big payouts. With that in mind, let's start with the race 9 - KENTUCKY DOWNS TURF SPRINT GRADE 3.

It's a 6.5-furlong turf race with 12 entrants. Normally, speed isn't the style of choice for these races as 51% of the winners in the last year were late runners. The average first call positions for eventual winners is 4.2 and 3.6 at the 1/4 and 1/2 quarter poles respectively.

While that would usually throw a handicapper off the scent of the early pace types, one must pay attention to the number of speed horses in the field. In this case, we spot one that might take the lead on his own and command the fractions from beginning to end. 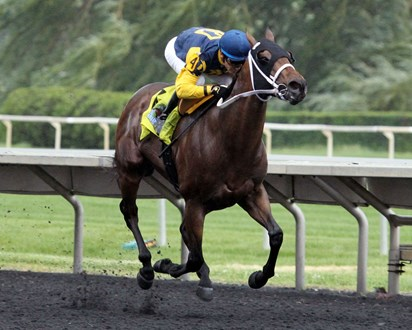 From our bonus commentary, "Taking a shot with RICHIESINTHEHOUSE as he could be lone speed. He's won two-of-three on the turf and could control the race with easy fractions." RICHIE is at 15-1 in the oddsmaker's eye. He could offer a lot more value than that.

To see who we think is going to run with RICHIESINTHEHOUSE, click here.

The stakes races kickstarter, Race 6 - $500,000 KENTUCKY DOWNS JUVENILE TURF SPRINT STAKES - offers horse players another opportunity to cash in if they can get the ticket right. The race features 11 horses with a 3-1 morning line favorite, MOONLIGHT ROMANCE (PP: 10).

While we expect MOONLIGHT to be a player, we see the race playing out a little differently. "MAE NEVER NO has run some strong races on the dirt, including the off track which can hint at turf success. Trainer, Wesley Ward is 21% winner first time on grass. CHATTEL is a nose away from three races on the turf, three wins on the turf. MOONLIGHT ROMANCE put in a couple of strong efforts before heading to Great Britain. If he puts a pre-Britain effort on the board, will be a threat. CARTER CAT trainer, Steven Asmussen wins at 22% with horses making their second turf start."

That's 5-1 over 5-1 over 3-1 over 8-1, all lukewarm, value like odds. Even if they are the four post-time favorites, any combination of them could result in a nice ticket.

The biggest race of them all is the 10th - $750,000 CALUMET FARM KENTUCKY TURF CUP STAKES. It's a Grade III affair that closes out the late PICK 4. We don't know about you, but how many times did you get the first three legs right, only to misfire on the closeout? Let's hope our house handicapper puts that jinx to bed.

Twelve, three-year-old and up, horses will be running 1 1/2 miles in the grass, That's a grueling race. These sorts of races are typically run with slowish early fractions and then all of them come charging down the stretch. 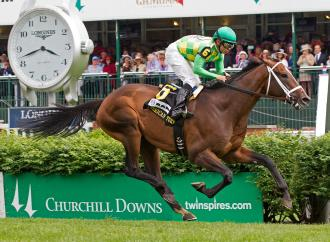 ARKLOW taking the tape at Churchill

Many times, one horse will try to jump out to a supersized lead and try to steal the race by holding on late. The most likely candidate, in our view, is ARKLOW (PP: 8 ML 12-1). Although he typically tries to close, he trotted out a new running style in his last at Ellis Park. He decided to get near the front in a 1 1/4-mile turf outing and was never worse than second in the win.

We do suspect ARKLOW will be in the hunt, as he always seems to be at the wire, but we like a trio of others to finish ahead of the eight. "OSCAR NOMINATED gets the nod as he is two-for-two at KD and has come off the bench firing in his last two. MULTIPLIER has the best speed figures in the last two races, usually a solid angle. BIGGER PICTURE has won 10 of 29 turf races, but none in the last five. He's due."

While this weekend lacks the marque race like the past two weekends with the Travers and Woodward, there are still 14 stakes races with prize money of at least $100,000. Many of them look like fantastic betting races.

Good Luck at the races and may all your tickets be winners.

GET OUR FULL CARD KENTUCKY DOWNS PICKS PLUS ALL OTHER TRACKS!