Saturday Stakes: TIZ THE LAW and SOUTH BEND tangle in the KENTUCKY JOCKEY CLUB STAKES on the Road to the 2020 Kentucky Derby

Churchill Downs oddsmaker Mike Battaglia sees TIZ THE LAW (PP: 3) as the horse to beat with morning-line odds of 7/5. TIZ THE LAW is coming off an E-Z, but eventful, 4 length win in the Grade I Champagne Stakes at Belmont. Jockey Manuel Franco had right the horse after stumbling out of the gate, navigate through traffic, split horses, and cut sharply through a “seam” to take a commanding late lead before letting off the gas. 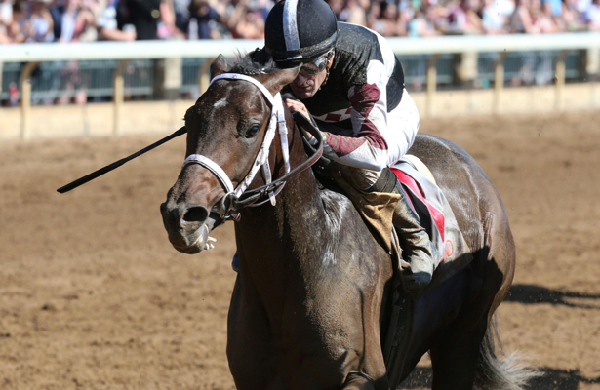 Captain obviously, Tagg and Franco hope for a cleaner trip today as they'll probably need it to beat the undefeated SOUTH BEND (PP: 4 ML 9/5). The two-year-old has won his first three races out of the barn. The patient horse has improved from race-to-race-to-race and could be the one to beat after recording the top, last race speed figure for the field of nine.

TIZ THE LAW and SOUTH BEND appear to be a cut or two above the rest of the field; however, they'll need to avoid the train wreck of a showdown between 2020 Kentucky Derby hopefuls EIGHT RINGS and DENNIS' MOMENT in the Breeders' Cup Juvenile. The two clear favorites finished sixth and last, respectively, in the Juvenile's field of eight - ugh.

Battaglia assigns morning-line odds less than 10-1 to three other horses:

ENFORCEABLE finished a distant third to MAXFIELD in his last start, the Grade I Breeders' Futurity at Keeneland in early October. Since, he's put in some decent workouts, including a 5 furlong bullet on November 9th. Riding the rail should put him a little closer to the front than usual with Churchill's quick first turn at 1 1/16 miles on the main track. Hugging the leaders a little tighter should help as ENFORCEABLE made up ground late in four of five starts.

FIGHTING SEABEE ran on turf for the first three starts of his career. Trainer Kenneth McPeek flipped him to Churchill dirt in his last race and the horse liked it. FIGHTING SEABEE posted his highest speed figure, by far, in a second-place finish behind SOUTH BEND in the non-graded $120k Street Sense Stakes. He too should benefit with the first turn just a few steps out of the starters' gate as he's run sixth in the opening quarter of his last two efforts.

SILVER PROSPECT is our least favorite of the three. Frankly, it wouldn't be surprising to see his odds higher than 10-1 at post-time. He finished third in the Street Sense Stakes after racing on the lead into the stretch, and then faded. To his credit, he ran early fractions in the 1 mile race that were on par with his previous 6 1/2 furlong times. However, he's given up ground late in four of his five starts.

We believe the KENTUCKY JOCKEY CLUB STAKES will be a two-horse race between TIZ THE LAW and SOUTH BEND, provided they don't blow tires like EIGHT RINGS and DENNIS' MOMENT. Our handicapper thinks ENFORCEABLE and FIGHTING SEABEE will battle it out for third with FINNICK THE FIERCE (PP: 6 ML 30-1) the long shot that has the best chance to fatten exotic payouts.