Saturday Stakes: It's a Million Dollar Day at Belmont Park and Kentucky Downs

Some horsemen/women are going to make a lot of money this Saturday. Today's stakes card includes two $1 million-dollar races.

The Wagering Guide includes picks, suggested wagers, early pace analysis and commentary on the contenders, value plays and long shots. Kentucky Downs is notoriously hard to handicap. We believe we've uncovered some winning angles that could point to potential winners.

Now we turn our attention to the other million-dollar payday, Belmont Park's JOCKEY CLUB DERBY INVITATIONAL STAKES. Along with a fat check, the winner will get a chance at another big-time payday by way of an automatic bid into the Breeders' Cup Turf Stakes this November at Santa Anita.

Nine, three-year-old horses will cover 1 1/2 Miles on Belmont's turf course. A $535,000 check, a shiny trophy, and a professional picture awaits in the winners' circle for the horse/team that hits the wire first, a DQ notwithstanding.

Oddsmakers see DIGITAL AGE (PP: 8) as the pre-race favorite with morning-line odds of 5/2. The Chad Brown trainee is making his third start following two-months in the barn. The leading money winning trainer wins third starts at 23%. 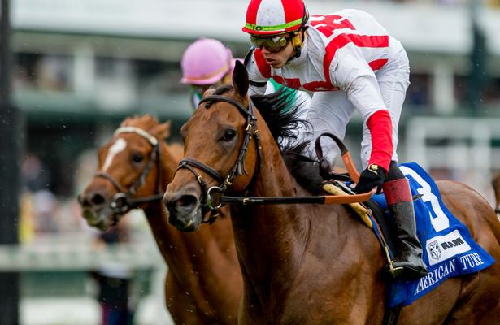 The horse to DIGITAL AGE is next up on the odds leaderboard. SPANISH MISSION (PP:9) is making his USA debut after six outings in Great Britain. It looks like he is a closer with will try to make his way to the front late. He's finished third by a neck and first by four lengths in his last two efforts, both at the G3 level. He has a win, place and show in three turf starts; however, sometimes a horse needs a start on this side of the Atlantic before hitting form.

A THREAD OF BLUE (PP: 1 ML 4-1) appears to be in form as he came off the sidelines following a two-month rest to wire the field at Saratoga. He recorded his lifetime best, speed rating and top for the field in his triumph at the $100k non graded level. It's an angle we like. 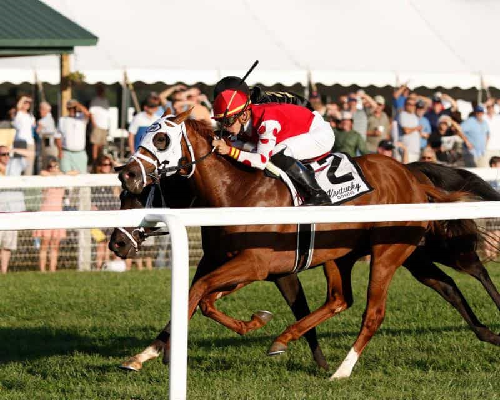 HENLEY'S JOY (PP:3) is the last contestant that's under 10-morning line odds at 5-1. He has a win in two Belmont turf starts, but both went on the inner turf course. He's one that likes to come home late. He has four wins and three thirds in 11 grass goes. To have a shot at adding to his record, HENLEY'S JOY needs to be no worse than third, maybe fourth at the start of the stretch.

Our handicapper believes the quarter could combine for the Superfecta. Here is how we line them up for our Pro Subscribers' Bonus Commentary.

"A THREAD OF BLUE has four wins, a second and third in eight turf starts. DIGITAL AGE is making his third start off the bench, a 23% winner for trainer Chad Brown. SPANISH MISSION has raced well at the Graded level in Britain. HENLEY'S JOY has four wins and three seconds in 11 grass goes, including a win in two Belmont starts."