Saturday Stakes: Two will run their way from the Louisiana Derby into September's Kentucky Derby

So, what are you doing this Labor Day weekend? Hopefully, we'll be allowed out of our houses by then. If we are, you can add the 2020 Kentucky Derby to your list of things to do. Churchill Downs Incorporated rescheduled the run for the roses from May 1, 2020 to September 4, 2020.

Nobody knows if the Derby will remain the first, second or last leg of the Triple Crown. The Maryland Jockey Club says they are likely to move the Preakness to September while the New York Racing Association, Inc. (NYRA) hasn't decided on their plans for the Belmont Stakes.

Our guess is that the Triple Crown races will remain in their normal sequence and the Belmont Stakes will run in October. No matter the eventual order, the Road to the 2020 Kentucky Derby rolls through the Big Easy. Saturday's Louisiana Derby at Fair Grounds is the first qualifying race where the winner gets 100 points, second earns 40 points, third receives 20 and 10 for coming home fourth.

For sure two, maybe three, Louisiana Derby horses could print their ticket for the first Saturday of September. Since the points system was instituted in 2013, the highest minimum total needed to qualify was 38.

A full field of 14 horses, with two alternate entries, will head to the gates for the 12th race on Saturday's card. They'll cover 1 3/16 miles on the Fair Grounds' main track. Dirt routes favor speed horses with nearly 60% finding their way to the winners' circle. Speed is not abundant in this field. We see three horses that could get to the lead with two of them as potential champs, possibly wire-to-wire candidates.

WELLS BAYOU (PP: 3 ML 8-1) could have the fastest first steps of the trio. The son of LOOKIN AT LUCKY is coming out of the Grade III, Southwest Stakes at Oaklawn Park where he ran fractions that rival some 6-furlong winners. The Southwest is 1 1/16 miles. He did fade a touch late, hitting the wire second while posting the top, last race speed figure for this large group.

If jockey Florent Geroux can throttle WELLS BAYOU by a second or so in the first half-mile, then he could go all the way around the track and never see the backside of another horse.

With outside post positions, MODERNIST (PP: 14 ML 6-1) and NY TRAFFIC (PP:11 ML 15-1) will likely step on the gas out of the gate, trying to get close to the front and to the rail before the first turn. The pair will likely duke it out for co-pilot status. MODERNIST is the one of the two we feel has the stamina to hold his speed from gate to wire.

NY TRAFFIC stalled late in his last against quality company. He held the lead in the Risen Star Stakes' second division for the first 1/2 mile before finishing third by 1 1/4 lengths. The Louisiana Derby is 1/16 mile longer and late fades don't play well in longer runs.

MODERNIST rode shotgun to NY TRAFFIC and then took over in the stretch, putting the Fair Grounds' Risen Star Stakes silverware in his trophy room. He's making his third start off the bench after dramatically cutting his fractions in the Risen Star. However, his times were slower than the numbers recorded by WELLS BAYOU. 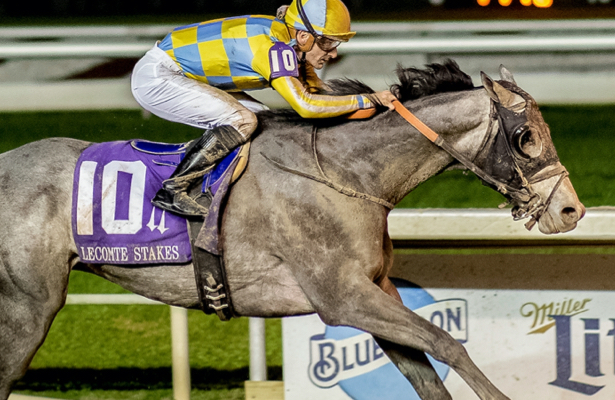 Morning line favorite, ENFORCEABLE (PP: 10 ML 7/2) tried to track down MR. MONOMOY in the final steps of the Risen Star's first division, closing the gap from 1 3/4 lengths to a length in the last 1/16 mile. One would think the extra distance should benefit ENFORCEABLE. That could be true. However, there are three more horses in today's run around the track and most of the field is composed of stalkers and closers.

In his last three efforts, ENFORCEABLE started 11th of 11, 11th of 13 and 8th of 8. Most of the horses to his inside employ an off the pace approach too. Jockey, Julien Leparoux might need to let the rivals to his left clear before he can move down the track and closer to the rail to save ground.

It could be very difficult on two fronts for the pre-race favorite to make it to the front in time for a photo session.

His chances to get the winner's 100 could be over by the quarter pole if the front runners go out in something slower than 24 seconds in the first quarter mile.

He's going to run into all sorts of traffic, possibly trying to go from worst to first.

In our opinion, it's going to take a clean trip with the right pace for ENFORCEABLE to make good on his morning-line favorite status. Our guess is he won't be the post-time pick. If he is, however, it's good news as the public's choice has outperformed the norm in Graded Stakes races at Fair Grounds. On average, favorites win at roughly 30%. Meanwhile, they've scored at 43% in 51 races of similar stature at the New Orleans course.

We feel pace will make the race and either WELLS BAYOU or MODERNIST will lean through the tape first. If they can control the early pace and run the first half-mile in around 48 seconds, they could run one/two all the way to September's Kentucky Derby.

Make sure you get our Louisiana Derby Wager Guide to get our full analysis, picks and more for the five Fair Grounds races with prize money of at least $100,000.