Who's Looking Forward to the 2019 Pegasus Cup?

The Breeders' Cup is a few days behind us now and trainers are starting to look ahead to January's Pegasus World Cup Invitational. Here's a potential line up of horses looking to take their slice of the $9 Million purse.

Even before he flew to victory in the Classic, ACCELERATE's trainer and connections had already purchased their spot in the gate. He's definitely heading to Gulfstream in January.

AUDIBLE: Audible made what felt like a surprise appearance in the Breeders' Cup undercard over the weekend. We hadn't seen him since the Derby and he showed us he wasn't done in the Cherokee Run Stakes.

CITY OF LIGHT: With a spectacular win in the Dirt Mile, another showdown between CITY OF LIGHT and ACCELERATE in the Pegasus would be a sight to see. CITY OF LIGHT beat ACCELERATE at last year's Pegasus and is going to be fighting for the Horse of the Year title before heading off to stud.

SEEKING THE SOUL: With a strong second in the Dirt Mile, trainer Dallas Stewart could very well be looking to use the Pegasus as a step to the Dubai World Cup.

MONOMOY GIRL: We need a filly in the line up right? This filly is probably ready for a break, but she's tough and could easily fight it out with the boys in the Pegasus. She's running out of competition in the filly and mares with wins in the Kentucky Oaks and the Breeders' Cup Distaff. 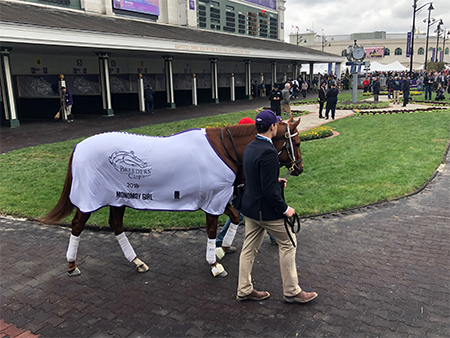 Bob Baffert: No, he's not a horse, but he's certainly going to have contender. The question at the moment is who. There's talk that WEST COAST will be retired and that could lead to MCKINZIE in the Pegasus. Saying that, both horses didn't have a spectacular Classic with 7th and 12th place finishes respectively.

There's a handful of stakes races to keep an eye on for the next couple of months, as you may see these horses and others use them as prep races: