The number of tracks running continues to shrink as states with stay at home orders close "non-essential" businesses, of which horse racing falls in some states, but not all for now. Florida, Texas, Oklahoma, and Arkansas continue to let horses race. California tracks were running but were shut down by health organizations.

With just a handful of tracks open for betting business, with only essential personnel allowed on the premises, the number of high money stakes races has dwindled as well. There is just one stakes race with at least a $100,000 jackpot running on Saturday.

Oaklawn Park hosts the $100,000 PURPLE MARTIN STAKES. A field of 10 three-year-old fillies will sprint it out in a 6 furlong run on Oaklawn's main track. The distance and surface favors fast horses with two out of three winners labeled early speed. A strong 67 of the 223 winners went wire-to-wire.

Not surprisingly, our top picks have shown the ability to run on/near the front. 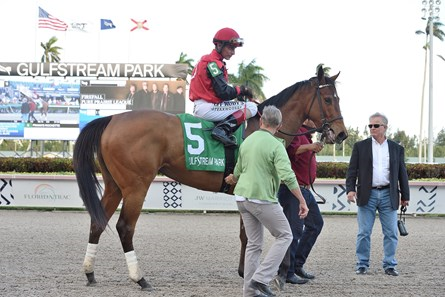 FRANK'S ROCKETTE (PP: 8 ML 5/2) came out of the barn to run her first race since October 6th, went to the front out of the gate, stayed that way all the way around the track and pulled away late, winning by 7 lengths. It was her best, and the top last race speed figure for this crew by a wide margin.

She's never finished worse than second in her five career starts, with two wins and three seconds. If she runs a similar race in round two off the bench, she should make it six for six in-the-money.

KIMARI (PP:1 ML 4-1) was a head away from being undefeated in four races before her last outing. She finished fourth in a 5 furlong turf race at Santa Anita, breaking her two win race streak. Horseplayers might make the mistake of thinking she'll be at the back of the pack today. However, she's taking a big drop in class and returns to dirt for the first time since her debut.

She started her career on Keenland's dirt track, winning a 4 1/2 furlong race by an amazing 15 lengths. Did she almost lap the field of five? KIMARI looks ready to blast with two bullet workouts in her last three training sessions. If she runs anything like she did to start her career, 4-1 will look like a gift.

EDGEWAY (PP: 4 ML 3-1) kicked off her career with an E-Z wire-to-wire win at Oaklawn on Leap Day, February 29th. She's trained well since and has every chance to show more in her second start. In her debut, she finished 6 furlongs in 1:09, which is the fastest final time at the distance in this field.

She'll be hard to beat if she can take a tick or two off that number, but that might be hard as she'll be challenged by this field, something that she didn't encounter against maiden class horses. 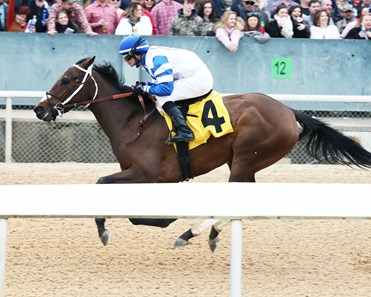 Lexi on the Move

LEXI ON THE MOVE (PP: 6 ML 8-1) could be the beneficiary if the frontrunners (as many as six) run out of the gates too fast. She tends to sit right behind the leaders for the first half-mile and then gets in gear. The running style has her undefeated in her two starts, both at Oaklawn and at 6 furlongs.

The final times for the pair of Ws is about three-to-four lengths behind the winning numbers for the top three picks. However, a super-fast start would work to her favor, allowing LEXI ON THE MOVE to move past tired legs in the final sixteenth of a mile.

Our handicapper lines them up in the same order as above and suggests using them in an exacta box.