Saturday Stakes: Our Picks for the 2019 Queen's Plate

On April 3, 1860, Johnny Fry (or maybe Johnson William Richardson) mounted a horse at 7:15 p.m. in St. Joseph, Missouri, and the Pony Express was born. A little more than a month later, Charles S. Littlefield Sr. mounted a horse named Don Juan and won the inaugural running of the Queen's Plate horse race. The Queen's Plate has run every year since and is the longest continuous race in North America.

In 1859, Sir Casimir Gzowski, President of the Toronto Turf Club, petitioned the Queen of the United Kingdom of Great Britain and Ireland, Victoria, to host a new race in Upper Canada. The Queen's Plate was born with Victoria's OK.

Fifteen tracks hosted the race during the first 20 years before moving to Old Woodbine in 1883 where it remained until New Woodbine was opened in 1954. Five years later, the first "official" Canadian Triple Crown started with the Queen's Plate, i.e. the Canadian version of the Kentucky Derby. New Providence took home the Canadian Triple Crown that year, adding the Prince of Wales Stakes Breeders' Stakes titles.

Of that longshot crew, MOON SWINGS probably has the best chance to hit the board. He's run no worse than fourth but no better than third in his six races on Woodbine's main track. Three races back, he finished third by 3 1/4 lengths to the 5/2 pre-race favorite, AVIE'S FLATTER. The three-year-old FLATTER has two trips on Woodbine's synthetic track, winning both. 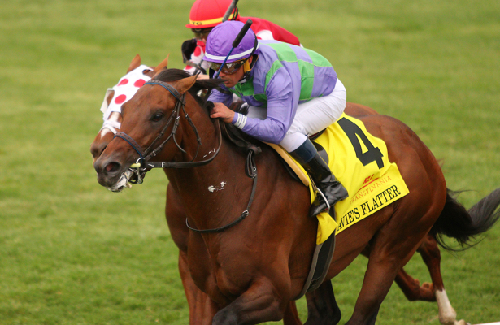 According to morning-line odds, ONE BAD BOY (PP: 5 ML 7/2) and SKYWARE (PP: 10 ML 4-1) are expected to give AVIE'S FLATTER the biggest challenge. ONE BAD BOY is likely to be on or near the lead with FEDERAL LAW (PP: 7 ML 15-1). The pair are the only horses in the field with a consistent history of getting to the front and pulling the pace cart. If both can run an opening half-mile of 48 seconds or more, they could run one-two all the way around the track. 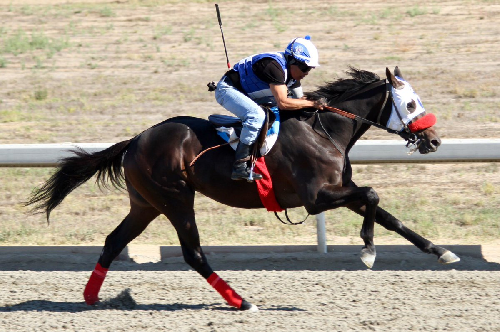 One Bad Boy working out.

Our handicapper ranks ONE BAD BOY third and FEDERAL LAW fifth in our selections. This is how our handicapper sees it in our Queen's Plate Wager Guide commentary:

"AVIE'S FLATTER owns the highest last race speed figure for this field and will be hard to pass with the lead in the stretch. SKYWIRE has the highest ceiling with the top lifetime speed number on an all-weather surface. ONE BAD BOY should be on/near the lead and has a chance to lead from gate to wire. DESERT RIDE has finished first (3x) or second (1x) in his four career starts. He was bumped by another horse the only time he didn't come home first."

The Queen's Plate isn't the only big race at Woodbine this Saturday. There are five other stakes races with at least $100,000 in prize money.

We have them all covered in our 2019 Queen's Plate Wager Guide. The seven-page report is complete with early race pace analysis, top contenders, value plays and longshots, picks, suggested wagers and more. Make sure you get your copy by clicking below.

GET OUR FULL CARD QUEEN'S PLATE PICKS AND WAGERING GUIDE!