Santa Anita Bias Report: Dashing for Dollars in May

Although it's heresy in the financial world, gambling and the markets have a lot in common. Both use data and trends to play the odds and predict outcomes with the hopes of making money. Stockbrokers look at financial metrics like P/E ratios, EBITDA (whatever that is, jk), and charts to make a calculated guess on future prices. Horseplayers pay attention to speed figures, odds, and past performances to project the finish of a race.

Figure out the numbers and you've unlocked the formula to being right more often; hear that cash register ring - CHA CHING!

Like guinea pigs burrowing through paper in their cages, we dug through May's data for Santa Anita to find nuggets of information to get that edge. Don't tell anybody, but this is what we found!

We'll focus on the three of the most common races.

Wager on the horses most likely to run first or second in the opening quarter. Eleven of the 18 (61%) May winners at the distance were in the top two at the 1/4 pole. Something that wins at 61% is roughly the same as 3/5 odds. 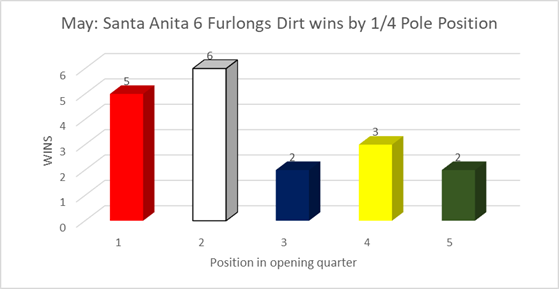 Breaking it down, the first to the quarter-mile marker won five and the second took home the crown six times out of 18. That works out to 27% (around 5/2 odds) and 33% (2-1 odds) respectively.

Moving down the narrow end of the funnel, none of the 11 early speed winners raced from the rail. Meanwhile, eight of the 11 broke from posts two (4x), three (2x) and four (2x). As you can see, the black and white two won four of the 11 (36% or 9/5 odds) speed wins. However, the two only captured one of the seven non-speed Ws.

Wagering Strategy: If you believe the two horse can get out of the box and be first or second in the opening call, put him/her on your ticket.

Again, post position played a significant role in the eventual outcomes. Like 6 Furlongs, the rail didn't score, and posts two, three, and four dominated, each winning three for nine of 13 (69% or close to 2/5 odds) May races at the distance. 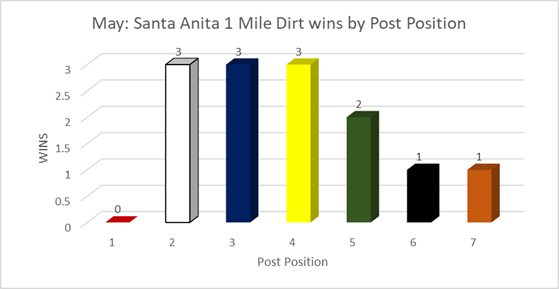 Early speed also played a role but not as prominently as 6 Furlongs as seven of the 13 (53.85% between 3/5 and 4/5 odds) races were won by horses that ran first (3x) or second (4x) in the opening quarter mile. We also find that three jockeys combined to win seven of the 13 races: Flavien Prat (2x), Joseph Talamo (2x) and Ruben Fuentes (3x).

Wagering Strategy: Look at horses in posts two, three, and four. Identify if any have Prat, Talamo or Fuentes in the irons and typically run first through third in the first quarter mile. If any of the horses hit all three legs of the post position, running style and jockey, include him/her on your tickets.

One mile on grass was the most commonly run race so far in May at Santa Anita, totaling 28. Once again, early speed has an advantage overrating or closing. Eighteen of the 28 (63.29% or 3/5 odd) horses to hit the tape first ran first (10x) or second (8x) at the quarter-mile mark. 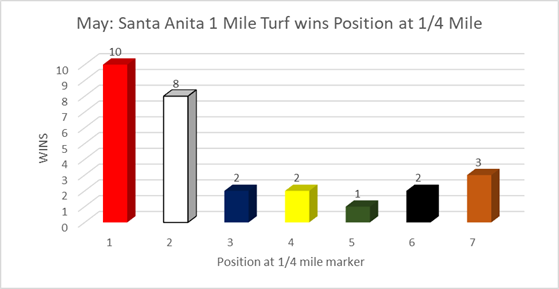 Wagering Strategy: Because post positions played evenly, jockeys divided up the wins; although Victor Espinoza won the most with five and would put the cherry on top with a mount, speed is all you need. Pick out the horse(s) that leads or rides shotgun at the quarter pole and the odds are you have the winner.

As you can see, early speed is the most dominant handicapping tool at Santa Anita's three most commonly run races. Sprinkle in post positions and jockeys here and there to maximize the edge and you'll probably pick more winners at the world's most beautiful horse racing course.