"Wild Man" is how trainer Michael Trombetta described INDEPENDENCE HALL'S pre-race kicking and bucking antics before the three-year-old rang in the new year with his third easy win. After a slow start, he collected 10 qualifying points for the 2020 Kentucky Derby as jockey Jose Ortiz rode INDEPENDENCE HALL to a 4-length victory in the Jerome Stakes at Aqueduct. 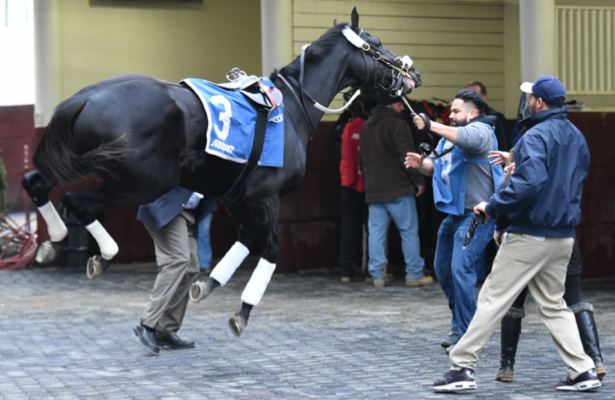 INDEPENDENCE HALL acting up before the Jerome Stakes

INDEPENDENCE HALL is now tied for fourth in 2020 qualifying points for the Derby with seven other contenders at 10. Another six horses will try to add their names to the 2020 Kentucky Derby contenders' list in the Grade III, Sham Stakes at Santa Anita.

Once again, the winner gets 10 Derby points, four for second, two for thirds and a point for fourth. AUTHENTIC (PP: 1) is the morning-line favorite to score the 10 and make it nine horses tied at 10 on the run for the roses' leaderboard. The Bob Baffert trainee is making his second career start after winning his debut as the 3/5 post-time favorite. Today, the oddsmakers see him as the 8/5 choice.

AUTHENTIC posted the highest, last race speed figure in his first real trip around the track with jockey Drayden Van Dyke in the irons. DVD stays on AUTHENTIC after riding UNCAPTURED HERO (PP: 3 ML 6-1) to his maiden score in his last effort. The Richard Baltas trainee wired an eight-horse field at 6-furlongs in a maiden claiming $100,000 run.

Van Dyke also rode Baffert's second entry, AZUL COAST(PP: 4 ML 5/2) to a maiden W in his debut, running past a field of seven to win by 4 lengths. AZUL COASTran the second-best speed figure, just one point behind AUTHENTIC, in his 1-mile score at Los Alamitos, whereas, AUTHENTIC won at 5 1/2 furlongs. 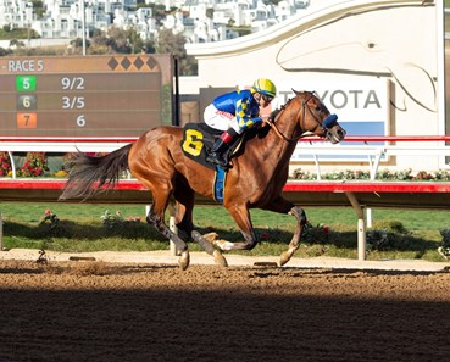 Despite AUTHENTIC stretching out for the first time, Van Dyke's choice shows which horse he feels has a best shot to win the Sham Stakes. Keen horseplayers will notice the jockey's pick considering he's ridden half the field in their respective last starts.

ZIMBA WARRIOR (PP: 2 ML 6-1) and TAISHAN (PP: 6 ML 5/2) are the only contenders with odds of less than 10-1 that Van Dyke hasn't ridden. ZIMBA WARRIOR is the most heavily raced horse in the field with five career starts. He finally hit the finish line first in his third try at Fresno, in a maiden 26,000. Since, he's finished a well-beaten third in a pair of four-horse fields. ZIMBA WARRIOR's work-to-date doesn't impress. It would not be surprising to see his odds much higher than 6-1 at post-time.

TAISHAN found the winners' circle for the first time in his second start, winning a 1-mile $50,000 maiden at Santa Anita. He hugged the leader all the way around the track before taking over near the wire by a length. TAISHAN'S final mile time at Santa Anita was slightly faster than AZUL COAST's Los Alamitos time; however, AZUL most likely let off the gas a bit with a commanding late lead.

Our handicapper agrees with Drayden Van Dyke and sees the Baffert horses running one-two in our Pro Subscribers' Bonus Commentary.

"AUTHENTIC won his debut as the 3/5 favorite. He's also the most expensive horse in the field. AZUL COAST is the second most expensive and won his debut with ease. TAISHAN broke his maiden in his second start at Santa Anita and at the distance. UNCAPTURED HERO should be on/near the lead all the way around the track, could be lone speed."