Sunday Stakes: Our Picks for the 129th Spinaway Stakes

Labor Day weekend racing continues with another strong day of stakes races on the calendar. It's the busiest Sunday in quite some time with 15 races with total jackpots of at least $100,000. Minnesota's Canterbury Park leads the way with six big-money races.

Toga's, Grade I SPINAWAY STAKES is the most significant contest of the day. The race is named after the filly, Spinaway, who beat the boys as a two-year-old in seven stakes race wins in 1880. The race in her name dates all, all, all the way back to 1881, but not uninterrupted. It wasn't run from 1882 until 1901, and then canceled in 1911 and 1912 due to anti-gambling legislation in New York.

This year's race will be the 107th consecutive and 129th running of the SPINAWAY STAKES, making it one of the oldest in North American horse racing.

Jockey Irad Ortiz, Jr. was in the irons for two of the last three SPINAWAY winners. He rode LADY IVANKA in 2017 and dead heated on PRETTY CITY DANCER hitting the tape simultaneously with SWEET LORETTA. This year, the jockey will wear black and white diamonds onboard PERFECT ALIBI (PP: 3 ML 7/2).

Perfect Alibi in the Adirondack Stakes

Ortiz rode the two-year-old for the first time in her last race and first since June 6th. PERFECT ALIBI got the W in Saraoga's Grade II Adirondack Stakes. It was her first trip around the SPA.

She got the better of morning-line favorite FRANK'S ROCKET (PP: 2 ML 8/5), who was the public choice in the Adirondack Stakes. FRANK'S ROCKET had an excuse as she was bumped and pinched during the race. She's been the bettors' top choice in both of her career starts and will likely hold that title again today.

If FRANK'S ROCKET can avoid trouble, her debut speed figure points to her as one of the horses with the highest ceilings and a legit contender for the top of the ticket. 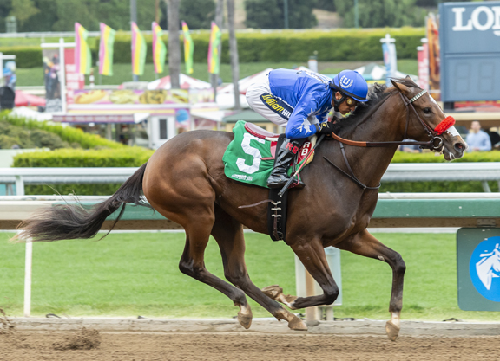 SHIPPY at the Spa

SHIPPY (PP: 7 ML 9/2) is the other horse with top-end speed ratings. She won her initial start by 10 lengths. In her last start, she was bumped at the start but still managed to come home third. It's worth noting that jockey Irad Ortiz, Jr. rode the Katerine Ritvo trainee that day. As we mentioned up top, the 20% winning rider chose PERFECT ALIBI today.

The other main contender, in our view, is FIGURE OF SPEECH (PP: 5 ML 4-1). She won her debut by 5 1/2 lengths for trainer Chad Brown. The 2019 leading money winning trainer does well with unpredictable two-year-old horses, winning at 22%, which is, unsurprisingly, tops in the field. Brown has also scored 65 wins following the maiden triumph in 247 tries (27%).

Here's how our handicapper ranks the quartet in pro subscriber's bonus commentary:

"FRANK'S ROCKET finished second in his last despite being bumped and pinched. PERFECT ALIBI bested top choice in her last. Trainer Mark Casse goes back-to-back Ws at 19%. FIGURE OF SPEECH won her debut easily. Trainer Chad Brown follows the maiden win with another at 27%. SHIPPY ran the highest, last race speed figure by far, despite being bumped at the start."