2020 Kentucky Derby: Springboarding from the SPRINGBOARD MILE to the Run for the Roses

ANSWER IN has come from off the pace to finish second by a nose in his debut and run by the pack, breaking his maiden in a 5 1/4 length win in his last outing. The two-year-old son of DIALED IN hasn't run since scoring his first win with the highest, last race speed figure. His workouts have been OK to blah since the last time he went to work.

Fortunately for ANSWER IN, there is only one horse in the field that's been on the lead in all their starts; albeit, all the entrants are lightly raced. MAXIMILIANO (PP: 10 ML 5-1) has held the lead in the opening half-mile of both his starts. He faded hard in his debut, finishing second by 9 lengths. Ah, but he battled relentlessly and showed a ton of heart in his second start, giving up the lead in the stretch, only to dig in, retake the lead late for the score.

That's unusual for a young horse or most horses for that matter. It's far more common for a horse to give in when they are passed. We are big fans of horses with grit, like MAXIMILIANO.

PIECE OF WORK (PP: 1 ML 12-1) is another potential rabbit for the field of 12 to chase. He won his debut and lone start in easy fashion, taking the lead from the jump and pulling away by 6 1/2 lengths at Remington's wire. That was at 6 furlongs. He's stretching out to a mile for the first time in his second career outing.

Quite often, horses that speed out to the front in sprints take a different tack in routes (race at 1 mile or more). Jockeys and trainers don't want to use up all the jet fuel early without knowing a young horse's full capabilities; so, experience says jockey Luis Quinonez might place PIECE OF WORK close to but not on the front early in the horse's first crack at a mile.

ROWDY YATES (PP: 3 ML 7/2) is an example. He's been close to or on the lead in his four races at less than 1 mile. Whereas, the Steven Asmussen pupil ran third and fifth at the 1/4 mile pole in his pair or routes, including a 4 3/4 Remington mile win in his last start. He's won both of his Remington starts and should make some noise late. 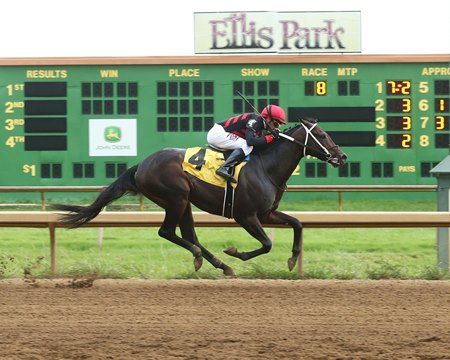 EMBOLDEN (PP: 8 ML 9/2) is another that could flash to the front. He sprinted to the lead in his first three starts, winning two on grass; however, he tired badly in his debut and only run on dirt. Trainer Michael Stidham is flipping the colt back to dirt after four goes on grass. It's also EMBOLDEN's first run beyond 6 furlongs (3/4 mile). It's difficult to say what style jockey Brian Hernandez, Jr. will choose today. Based on his recent form, we put it at 60/40 he rides EMBOLDEN mid-pack in the first half of the race.

Our handicapper expects the favorite and most of the speed horses to factor into the SPRINGBOARD MILE's final decision: our Pro Subscribers' Bonus Commentary:

"ANSWER IN is a nose away from starting his career two and oh. SHOPLIFTED is the most expensive horse in the field by a wide margin, perhaps he can live up to the price tag today. EMBOLDEN has finished in-the-money in all five starts (5: 2-2-1). MAXIMILIANO broke his maiden a tough, courageous battle. We like horses with heart."