There are only a handful of $100,000+ stakes races today after a whopping 18 yesterday. They include:

It is said that a picture is worth a thousand words. Our hope is that the charts below help horseplayers get a picture of how bias impacts the outcomes of horse races. Profitable wagering depends on using probabilities to your advantage, i.e. playing the odds to your favor.

Together with our Pro Subscribers' Bonus commentary, maybe the pictures (graphs) below can be worth a few winning tickets and few more bucks in your bankroll.

Let's look at data for the Belmont Stakes races since they both have the same name and are being run at 7 furlongs on turf; living by the K.I.S. principle - Keeping it Simple. 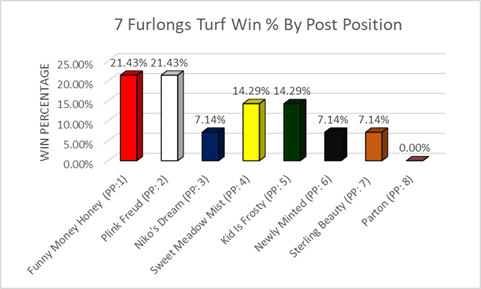 Win Percentage at 1/4 Pole based on Last Race Early Pace: 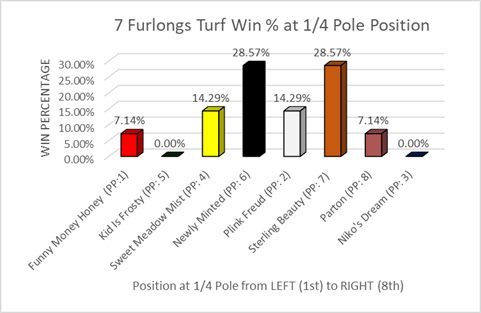 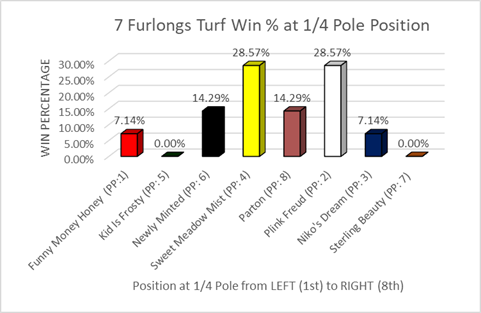 The Play according to our Pro Subscribers' Bonus Commentary:

NEWLY MINTED is undefeated in three dirt starts. Her two wins on an off-track suggest she likes the grass, too. FUNNY MONEY HONEY gets to ride the 21% winning rail and has a win and a third in two turf runs. SWEET MEADOW MIST is two for two on dirt, including a score on a wet track and a possible prelude to turf success. NIKO'S DREAM has a win and a second in two Belmont turf starts.

Note: BANKIT is listed in the seventh post position in the program, but he is a main-track-only (MTO) entrant. We are working under the expectation that the race will be run as scheduled on grass and dropped program numbers eight (BETTOR BANK ON IT), nine (MAGICAL TALE), ten (VETERANS BEACH), and eleven (COACH VILLA) down one spot for post positions.

Win Percentage at 1/4 Pole based on Last Race Early Pace: 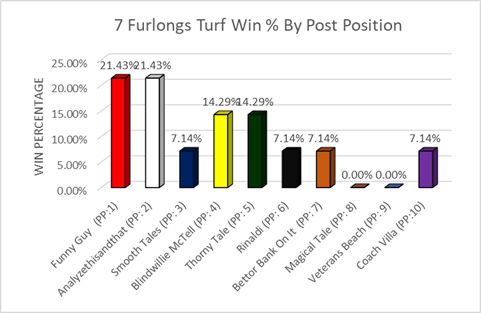 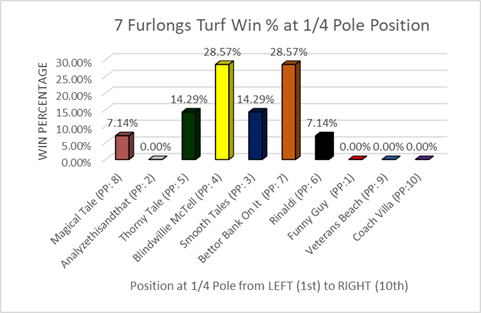 The Play according to our Pro Subscribers' Bonus Commentary: 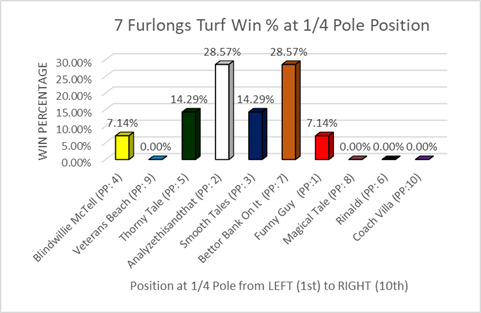 BLINDWILLIE MCTELL is 3/4 of a length away from a four-race win streak. FUNNY GUY travels the 21% winning. ANALYZETHISANDTHAT has a win and a third in two turf starts. SMOOTH TALES' trainer Linda Rice wins at 35% when teamed with jockey Jose Lezcano.

It's no surprise that many of our picks for today's Belmont Stakes races crisscross the biases illustrated above. Of course, nothing is perfect when putting money at risk; so only wager what you can afford to lose. It's the responsible thing to do.