With Santa Anita temporarily shut down to examine track conditions due to 21 horse deaths, Aqueduct hosts the only stakes race with prize money of at least $100,000 today.

The Heavenly Prize Invitational is scheduled to run at 5:12 pm Eastern in Aqueduct's eighth race on the day's card. It features seven fillies and mares, four-years-old and up. The ladies will race 1-mile on Aqueduct's main track for their share of $150,000.

Let's look at some of the numbers from the last 56 one-mile Aqueduct dirt races to identify some track biases to help narrow down our list of contenders.

The first item of interest is post position. It seems the rail has a distinct advantage, winning 13 of the 56 (23%). Meanwhile, posts two, three, and four have won seven apiece. Spots five and seven have taken home the top-prize five times and post six is the weak link with just three scores. 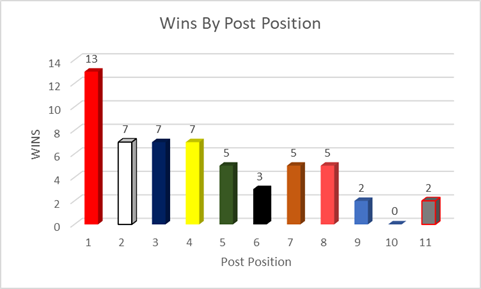 Based on post position, the top four horses include:

One of the previous two winners wired the field and the other came from off the pace, but both were first in the stretch.

This chart shows how each of the seven entrants averaged over the last three races. 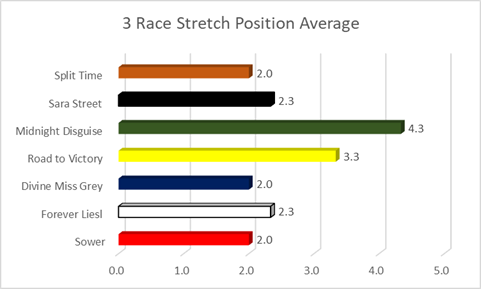 Compared to the field, SOWER and SPLIT TIME maintain their one-race stretch leader status with their three-race average but are now joined by DIVINE MISS GREY.

In their last race, only SOWER and FOREVER LIESL topped 100, but both fell below the 103.5 mark. Here are the rankings based on the field's last three dirt races (note: ROAD TO VICTORY has raced on dirt in two of his five races.) 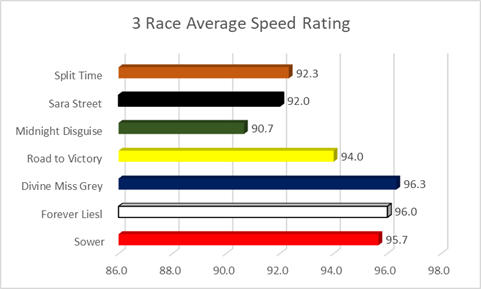 As you can see, based on their three race speed ratings, DIVINE MISS GREY should come home first, FOREVER LEISL second, SOWER third, and ROAD TO VICTORY filling out the superfecta.

SOWER is the only horse in the field to qualify as a top contender based on post position, average stretch position, and speed rating. That's not to say she's going to win, but SOWER should be a major player in the Heavenly Prize Invitational Stakes and at a decent price.

Now, let's see how our handicapper called it in our Pro Subscribers' bonus commentary.

"A winning case can be made for every horse in this race. ROAD TO VICTORY has performed well in her two dirt races, both Grade II and following a turf race. She bombed as the favorite on Gulfstream grass in her last. Trainer Mark Casse bounces back at 25% with beaten favorites. DIVINE MISS GREY is a horse with an affinity for Aqueduct, three wins and two seconds in five races. MIDNIGHT DISGUISE is making her second start off a layoff and has a strong AQ record too, four wins and two seconds in seven races. Trainer Linda Rice wins at 25% in second starts. SPLIT TIME has three wins in three races at the distance, all at Aqueduct."

Hopefully you enjoyed the data-driven look at the Heavenly Prize Invitational Stakes. We'll be bringing more detailed, data-driven stories to our Radar section, so keep it here.