Let's breakdown the lone graded run for the day, the SWEET LIFE stakes. I mean, who doesn't want a Sweet Life… winner? It seems, that would make life even sweeter.

A field of eight fillies will race 5 1/2 furlongs on Santa Anita's turf course. Horseplayers might expect early speed to be the most significant factor in a short sprint; however, only 17 of the 33 winners at the distance were labeled speed.

Post position has been played a larger role with gates two through seven scoring at the highest rate. Meanwhile, the rail got to the wire first in just two of the 33 races and horses eight and out three times. FLORENTINE DIAMOND (PP: 1 ML 20-1) and SPITEFULNESS (PP: 8 ML 15-1) will need beat the post bias and their odds to wear the SWEET LIFE ring.

FLORENTINE DIAMOND ran her top speed figure in her last race, which was her first on grass. She took the lad early and faded late at today's distance on Santa Anita grass. She could upset with more stamina in her third career start; however, her speed numbers and post suggest the backend of exotics might be more realistic.

SPITEFULNESS hasn't been close in her last three, losing by 16, 22, and 21 lengths. Quick picks should be the only tickets with SPITEFULNESS.

BLUE SKY BABY is making the classic third start after a layoff, a 19% winner for trainer Philip D'Amato. She's run a pair of 1 mile turf races in her runs off the bench and returns to a sprint for the first time since her debut. She won her first career start, 5 1/2 furlongs on Santa Anita grass. She'll be stalking the lead and well positioned to close the show.

SHINE HER LIGHT is making her second US start after starting her racing career in Ireland. She won her debut on this side of the Atlantic, scoring a 5 1/2 furlong, Santa Anita turf win. Experience says international horses tend to be better in their second start and SHINES HER LIGHT will get Lasix for a second time. That hits at 32% for trainer John Sadler.

LIGHTHOUSE hits the track for the first time since December 29th when she finished a well beaten seventh of nine. It was her first try at a mile after two 5 furlong sprints, one at Del Mar the other at Santa Anita. She finished third in her debut at Santa Anita and then won at Del Mar. She's put in two bullet works in her last four training sessions and should be ready to roll at a distance that appears better suited for her. 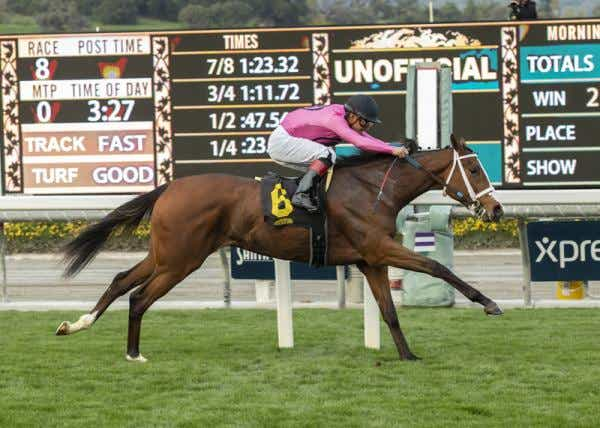 LAURA'S LIGHT is the morning line favorite following a wire to wire win against BLUE SHY BABY and LIGHTHOUSE on December 29th. She hasn't sprinted on turf yet, racing at a mile twice and 6 furlongs on Golden Gate's all-weather track. She's been on/near the lead in her trio of races; however, running style doesn't always translate when flipping to a sprint from a route or a route to a sprint. Her workouts have been OK leading up to today's start, but her limited history suggests she's a top contender.

Here's how we lined them up in our Pro Subscribers' Bonus Commentary.

"SHINES HER LIGHT won her first race in the US at Santa Anita at the distance/surface. She could be better in round two. LAURA'S LIGHT has the highest, last race speed figure and finished first and second in her two turf races. LIGHTHOUSE's 5 furlong, turf fractions suggest she'll be on/near the lead. BLUE SKY BABY is cutting back after two tries at a mile. She won her debut at the distance/surface."