BONUS: In this special episode of The Player's Edge, Rich takes a hard look at the July 4th Belmont card and gives his advice for a potential late Pick 4 ticket.

FRANK'S ROCKETTE (PP: 1) has been the post-time favorite in each of her seven starts. The daughter of INTO MISCHIEF has lived up to the status in three of her outings while finishing second in the other four. Trainer William Mott's horse is likely to be the heavy, heavy favorite again and is the oddsmaker's 3/5 morning line choice to visit the winners' circle.

We expect her odds will likely be lower than 3/5 when the doors open for Belmont's third race Saturday afternoon: the $100,000, Grade III Victory Ride Stakes.

A short field of five are going to run 6.5 furlongs from gate to wire. FRANK'S ROCKETTE could lead them all every step of the way as the distance favors early speed. She's absolutely the fastest horse out of the box and rides the 20% winning rail. And, oh yeah, she recorded the top, last race speed figure and could be even better in her second start off the bench. No excuses!

So, which of the other four has a shot at the upset? Well, we can toss MISS PEPPINA (PP: 5 ML 20-1). She won her debut at 12-1, breaking the $80K maiden at Belmont and immediately stepped up to Grade I and II races. That didn't go well, finishing fourth in both and losing confidence to finish 10th of 12 on the grass in her last race.

CENTER AISLE (PP: 4 ML 5/2) is the program's second choice and is making just her third start. If she can return to her debut form on March 29th, winning with a triple-digit speed figure in an impressive stalking score, then she's the most likely to get past FRANK'S ROCKETTE. She moved into a $75k Optional Claiming race as try number two and faltered from beginning to end as the 3/5 chalk. She moves even higher on the class ladder and cannot afford any missteps if she plans on a winners' circle photoshoot. 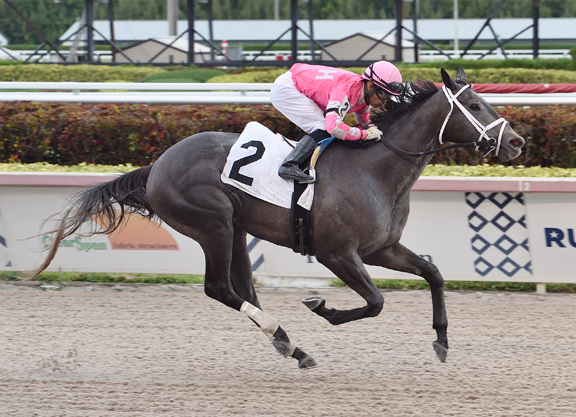 UP IN SMOKE at Gulfstream Park

UP IN SMOKE (PP: 2 ML 7/2) has four wins in five starts. The lone miss was on a “good” rated, Gulfstream Park track and her only trip past 6.5 furlongs. She should get a fast surface on Saturday and stays in her comfort zone distance wise. She could be a victim of pace as she likes to rally from the back third of the pack. The leaders shouldn't be under too much pressure to drag race early on. So, she might need to ride closer to the front than usual to wear the Victory Ride crown.

REAGAN'S EDGE (PP: 3 ML 8-1) has two wins and a third in three races. He's moving up in class after posting the second-best speed number for this crew in his last go-around at Churchill. He showed he can find the checked flag on the lead and off the pace. Our guess is that jockey Jose Lezcano will try to hug the leader and push the go button in the stretch.

Here's how our Metropolitan Wager Guide Commentary for Pro Subscribers:

The Play: FRANK'S ROCKETTE should have the pace all her way. She's never missed the board in seven starts with three wins and four seconds. REAGAN'S EDGE has two wins and a third in three starts. She should be right off the lead and has a solid late run. UP IN SMOKE is one for one at the distance, her last effort, and trainer George Weaver wins at 17% following a W. CENTER AISLE got off to a bad start in her last run. She'll need to break sharply today to keep pace with FRANK'S ROCKETTE. If not, then she's probably battling for place money at best.