While we've all been engorging ourselves on turkey and dressing leftovers, it's been a bit of a busy news week in the world of horse racing. Here's what's been happening!

After months of programming, our new Apple and Android Apps are now officiallly launched. The new app has a fresh re-design and tons of new features including easier to read and use graphical interface optimized for phone and tablets, weather conditions and local temperature for each track, each race graphically displays track surface (dirt, turf, all weather), choose Flip or Scroll type tipsheet view, Share-A-Sheet - share your tipsheet purchase with a friend at no additional cost, list tracks by geo-location, those physically closest to you are listed first if you choose, see graph of our top performing tracks over the last 14 days, desktop widget that shows the top performing tracks over the last 14 days and much more. Check out some of the screenshots below. 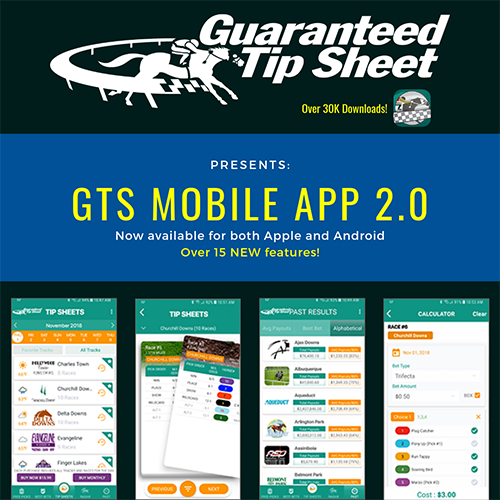 On November 24th, Santa Anita fans were shocked and many upset when track announcer Michael Wrona tweeted that he had just been fired and was no longer employed by Santa Anita. The Stronach Group's Tim Ritvo confirmed the on DRF.com stating, "It's just a change in business. We're going in a different direction. He did a fine job. We're appreciative of the job he did."

Santa Anita's new announcer was announced on the 26th as Frank Mirahmadi. Mirahmadi is currently calling at Aqueduct and just finished his fourth season at Monmouth Park. Tim Ritvo stated that they wanted an announcer who was "more involved" and according to Ritvo, Mirahmadi fits that bill.

We're very excited to be able to hand Frank the microphone here on opening day. In addition to being an outstanding communicator, to know Frank is to love him. He's very engaging, funny guy who brings a unique perspective to his job."

Mirahmadi started his career on December 24, 1992 when he was invited to be a celebrity impersonator at Hollywood Park. He has called races at Hialeah, Oaklawn, Golden Gate and Louisiana Downs. He's previously called at Santa Anita in 2014 and 2016.

Upset in the Kentucky Jockey Club

With KNICKS GO the clear favorite going into the Kentucky Jockey Club on November 24th, SIGNALMAN had other plans. The colt had suffered some tough Grade 1 losses lately including the Breeders' Cup Juvenile just four weeks ago. Although he put down a heck of a run in the Juvenile, he really had a chance to show what he could do this past weekend. He covered the 1 1/16 mile distance in 1:45.29. PLUS QUE PARFAIT finished second with LIMONITE coming in third. KNICKS GO finished 11th in the field of 14.

Brad Cox's Clark Handicap winner LEOFRIC is looking at a potential start in the Pegasus World Cup January 26th. Cox won his first Kentucky Oaks and first Breeders' Cup race in 2018. The Pegasus would make for a nice start to the 2019 racing season. Cox is going to watch and see how the colt develops. His long term plans are to run the 5 year old in some Oaklawn Parks' stakes for older horses.

AUDIBLE is on track for the Pegasus by way of the December 15th Harlan's Holiday Grade 3 at Gulfstream. AUDIBLE has run two big races at Gulfstream, making the prospect of the Pegasus that much more exciting for Todd Pletcher.

CITY OF LIGHT took the Dirt Mile by 2 3/4 lengths. The Pegasus gives the colt the chance to stretch out a bit. It's also the same distance in which he beat ACCELERATE in the Oaklawn Handicap. Watch for the colt in the Cigar Mile at Aqueduct as his next start December 1st.

Abel Tasman to be Sold at Keeneland's 2019 January Sale

The winner of the 2017 Kentucky Oaks and multiple Grade 1 winner, ABEL TASMAN, will be sold as broodmare prospect by Taylor Made Sales Agency at the January Horses of All Ages Sale. The mare will sell as Hip 288 on Monday, January 7th.

It was a Pick-5 Thanksgiving weekend. We had some nice Pick-5 payouts that would surely help with your Black Friday, local Saturday, Cyber Monday and all your holiday shopping. It started at Golden Gate Fields on Thanksgiving when our picks included the $14,689 Pick-5 at the California track. Staying in the Golden State, on Saturday at Del Mar we had the $2 P5 that paid $1,158.20. Sunday produced another fat Pick-5, this time at Churchill, a cool $1,721.60. And for good measure and cheer, Monday's $2 P5 win at Finger Lakes of $5,025 got the week started right.

Congratulations to our users who scored some of these nice, Thanksgiving wins, truly something to be thankful for.