It was a sunny Saturday at Saratoga! The perfect day and weather for the running of the Midsummer Derby, the Travers, as well as several other exciting stakes races of the day. Here's a wrap up of Travers Day.

MITOLE and PROMISES FULFILLED battled it out early after a quick break. With a blistering pace, PROMISES FULFILLED began to slow in the turn and MITOLE drew off to pull ahead and beat FIRENZE FIRE. Three quarters of a length back, KILLYBEGS CAPTAIN finished third.

Finishing the test in 1:08.91, he set a stakes record, which was previously held by A.P. Indian. He also passed the $2 million in earnings marker with the win and is 5 out of 6 for the year.

With a slightly slow break, COME DANCING chased the four pacesetters early. SEPARATIONOFPOWERS and MIA MISCHIEF battled for the lead early, but COME DANCING quickly got it together and moved into third.

As the pacesetters tired, COME DANCING took the lead at the top of the lane and separated from the pack to take the win followed by DAWN THE DESTROYER in second and SPECIAL RELATIVITY.

With her Ballerina win, we'll be seeing COME DANCING in the Breeders' Cup Filly & Mare Sprint.

SHANCELOT broke quickly and went to the front setting fractions of :23.15 and :45.58. CALL PAUL sat in second with MIND CONTROL and TWELFTH LABOUR following closely behind. HOG CREEK HUSTLE and NITROUS trailed.

SHANCELOT lead by 2 1/2 lengths as they turned from home with several in close pursuit. Vying for the advantage, MIND CONTROL, ROWAYTON and HOG CREEK HUSTLE came on strong to jump at the wire leaving the result a photo finish. SHANCELOT managed to edge out ROWAYTON out of the top three. 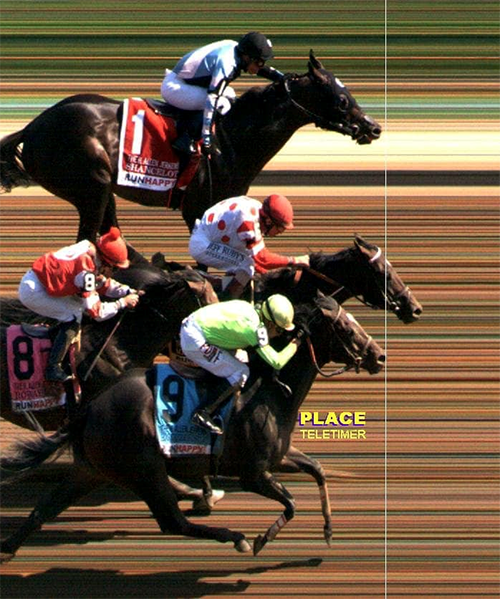 The Personal Ensign was a race unlike any other with two of the top females in horse racing vying for the finish line at the end of 1 1/8th miles. Their performance did not disappoint and it might as well as been a match race in the final strides.

COACH ROCKS set the pace with SHE'S A JULIE and ELATE following. She held the lead along the backstretch, but MIDNIGHT BISOU slowly began making her way towards the front of the pack. ELATE had her eye on the front as well and took over the lead as they came in to the far turn. On the stretch it was a match race between ELATE and MIDNIGHT BISOU. The mares separated from the pack, both dueling neck and neck to the wire resulting in another photo finish for the day.

It was a gut wrenching wait for the results of the photo finish, which showed MIDNIGHT BISOU getting the bob and the win. SHE'S A JULIE finished third 8 1/4 lengths back.

With the win, MIDNIGHT BISOU has spot in the gates for the Breeders' Cup Distaff. However, there's a chance that she might just be in a race with the boys - perhaps the Classic. 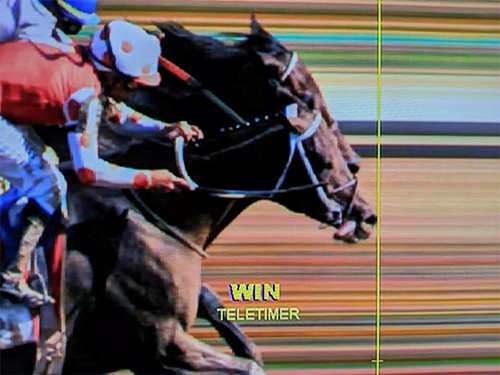 YA PRIMO and CHANNEL MAKER set the pace early in the 1 1/2 mile Sword Dancer. They battled for the lead throughout the backstretch. Rounding the turn home, CHANNEL CAT moved three wide, making it three abreast in the stretch. SADLER'S JOY and ANNALS OF TIME came from the far outside to challenge and NOBLE THOUGHT made a bid on the inside up the rail, unable to find an opening.

With the win ANNALS OF TIME won an automatic berth in the Breeders' Cup Turf (G1T).

CONQUEST CANDY went to the front to set the pace and fractions of :24.22 and :48.47. She held the lead as the field turned down the stretch. She held the lead by 1 1/2 lengths through the mile, but the field caught up with her and began to rally. SIGNIFICANT FORM beat them to the wire, followed by INDIAN BLESSING who rallied from fifth. A neck behind her was STARSHIP JUBILEE in third, nosing out FIFTY FIVE. CONQUEST CANDY held on for fifth. The final time was 1:41.39 for the 1 1/16 mile race on firm turf.

This Ballston Spa score was the fifth Ballston Spa victory for trainer Chad Brown and jockey John Velazquez. It was also Brown's third year in a row to win the race.

TACITUS took the early lead, wearing blinkers for the first time. CODE OF HONOR sat back in the pack in ninth, conserving his energy.

Turning into the backstretch, MUCHO GUSTO took over the lead with TACITUS moving back to second on the rail with TAX alongside him.

TACITUS and MUCHO GUSTO remained in the lead until the eighth pole until CODE OF HONOR arrived on the outside. Rallying eight wide, he flew past the leaders and crossed the wire in 2:01.05. TACITUS finished a wide second a half-length ahead of MUCHO GUSTO.