Saturday Stakes: A Deep Dive into the WILD APPLAUSE STAKES

If you've never used our Wagering Guides, you'll get a taste today with our look at the WILD APPLAUSE STAKES. The ninth race on Belmont's card is one of 18 Saturday Stakes races with at least $100,000 in prize money. Of course, we have them all covered in today's tipsheets. 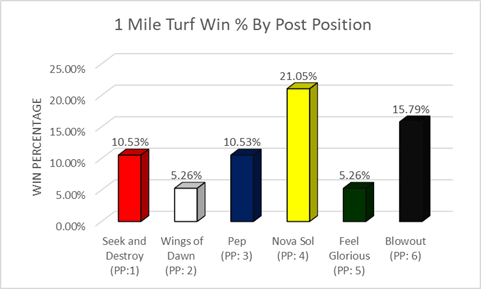 #4 - Nova Sol finished second in her last race as the favorite. It was her first race in the US after three outings in France. Trainer Chad Brown wins at 21% with horses making their second start for him and 25% in second starts after a layoff.

#6 - Blowout is a head and 1/2 length away from being undefeated in three races, all on turf. Trainer Chad Brown and jockey Javier Castellano have been rocking lately. They have three wins, three seconds and three thirds in their last 11 races together.

#5 - Feel Glorious is just a length away from being undefeated since moving to the US from Great Britain. She was in traffic and bumped late in her last, finishing second. She's one for one at the distance, which should work to her favor coming from 7 furlongs in her last start.

#1 - Seek and Destroy is coming off a Grade III win in her last race and first outing in seven months. Trainer Chad Brown wins seconds starts at 25%. She would be rated higher, but she took a step backwards in her only other second start and missed badly in her other turf route.

#2 - Wings of Dawn is on a two-race win streak on Woodbine's all-weather surface. However, she's oh-for-two on grass. On the plus side, she's making her third start off the bench, a 19% winner for trainer Mark Casse.

#3 - Pep should figure into the race early. Unfortunately, she's not been able to close the deal after winning her debut. She'll have to show more stamina late while stepping up in class. Today will be the highest level she's competed at in her five starts.

Early Pace based on Last Race: 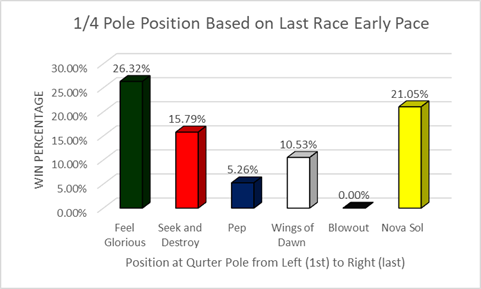 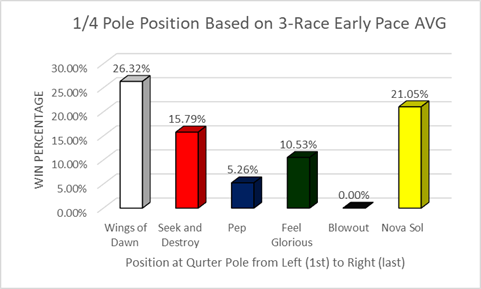 Early Race Outlook: SEEK AND DESTROY consistently gets to the front and should be the one to catch. PEP is likely to ride shotgun with WINGS OF DAWN and FEEL GLORIOUS settling in for third and fourth, in either order.

The Play: NOVA SOL steadied early in her last race, finishing second by 1 3/4 lengths as the favorite. A cleaner start and she could find the wire first. BLOWOUT has never finished out-of-the-money in her three starts (all on grass) with a second and two seconds. FEEL GLORIOUS' trainer/jockey combo of Christophe Clement and Joel Rosario have two wins, two seconds, and a third in their last five together. SEEK AND DESTROY is on a three-race win streak. Trainer Chad Brown follows a win with another at 28%.

Hopefully, you enjoyed the inside look at a real race sample of our Wagering Guides (minus the graphs). You can put our next wagering guide to use for next Saturday's Queen's Plate card at Woodbine. The feature race, the Queen's Plate, is the first race in Canada's version of the Triple Crown and longest consecutively run race in North America, dating back to 1860. Make sure you get all the latest on the 2019 version by becoming a Pro-Subscriber.