Sunday Stakes Preview: Breaking Down the Bay Ridge at Aqueduct

Aqueduct hosts the only $100,000 stakes race today. The BAY RIDGE STAKES. Nine fillies and mares, three-years-old and up and foiled in New York State, will run 1 1/8-miles on Aqueduct's main track. Saturday's Aqueduct picks paid out $2,383.08, so let's try and continue that trend today.

Let's break the race down horse by horse to identify the contenders and the pretenders.

Her biggest advantage is drawing the one-spot as the rail is winning at 23%. This consideration alone is enough to put her in the contenders' bucket. Additionally, she's riding a streak of good form with four wins in her last six race and a second. She has a good track record at Aqueduct with six in-the-money finishes in eight races; however, she has only one win, a second and four place finishes.

OUTLOOK: While UNBRIDLED ADVENTURE is a potential threat to win, it's more likely she fills out the backside of an exacta or trifecta.

She's been heavily bet in most of her last 10 races, going off as the public's choice to win in seven. She finished second as the favorite in her last, flattening out in the stretch. However, she had an excuse as she stumbled at the start. Trainer Rudy Rodriguez wins the next race a 24% with beaten favorites.

Aqueduct has been a good track for her with four wins, three seconds and two thirds in 10 races.

OUTLOOK: With a better start, FROSTIE ANNE is a top contender to hit the tape first. She might prove to be a good value on top of the ticket if players hold her recent form against her.

The four-year-old is making her second start after a short rest. She's a neck away from winning both of her previous two second starts. From a cycle perspective, that's worth noting. She won her first start, but trainer John Terranova II only follows a W with another W at 12%. It's also interesting to not that he final time in her last race was slower than her previous one-mile Aqueduct journey.

OUTLOOK: Her recent second-race history and track record says PINK TWIST is a candidate who can pull off the upset at nice odds.

She is also making a second start following a little less than a month racing hiatus. She finished third by 1/2 length against PINK TWIST and OUT OF ORBIT in her last race. Trainer Steven Asmussen performs well at the non-graded stakes level, winning at 18%. However, NO HAYNE's finished at least 7 3/4 lengths behind the winner in her two most recent non-graded stakes outings.

NO HAYNE NO GAIN does have five third place finishes in seven Aqueduct races. So, she does seem to find a way to cash in at AQ more often than not.

OUTLOOK: Although NO HAYNE NO GAIN's Aqueduct record points to her being a consideration as potential exotics bets filler, her recent non-graded stakes outcomes suggest this level is over her head.

The three-year-old filly is making her third start off the bench and is dropping in class from a Grade III where she finished fourth by a distant 11 lengths. She posted the highest, last race speed rating, which is roughly the same percentage angle as betting the favorite.

In the last 10 races, she's made two third starts and won both, one by 2 and one at Aqueduct by 5 1/4 lengths. Winning at the 'Duct is nothing new for SPLIT TIME as she she's took home first place in three of five races with a second.

OUTLOOK: The lone miss at Aqueduct for SPLIT TIME was in her last race at the Grade III level. The step down in class should be a better fit for her and makes her a prime candidate to come home first.

Despite the implications of the name, this five-year-old mare in coming in from Finger Lakes, where she finished in-the-money in seven of her last 9 races. The lone non-FLAKES race was a $250K non-graded stakes race at Belmont, where she got hammered, finishing eighth of nine, 24 lengths behind the winner. She also finished 7 lengths behind the winner in a $50K non-graded Finger Lakes stakes race.

Trainer Jeremiah Englehart wins at 29% with shippers and at 34% with beaten favorites. PRIDE finished third as the chalk in her last Finger Lakes race on November 26th.

OUTLOOK: Based on her inability to stay anywhere near the winner in her two most recent non-graded stakes races, PRIDE OF SARATOGA is likely to be a non-factor in the race.

She is coming off back-to-back wins, at 1 1/8-miles at Aqueduct and 1-mile at Belmont Park. Both were ridden by jockey Eric Cancel who stays in the irons today. In fact, the jock guided the filly in two if her four wins.

Trainer Philip Serpe wins at a respectable 17% following a score and at eye-catching 25% in 32 non-graded stakes race. So, he spots his horses well and puts them in races they can win.

OUTLOOK: Her fractions are a touch slower than some of the main competitors in the field. However, jockey Cancel has gotten the most out of HELD ACCOUNTABLE and might have her in position to cash a check, but probably not that first-place money.

The morning-line favorite has posted some of the best speed figures in this group. She raced on December 1st in a Grade III, finishing fourth by a distant 14 lengths. She's developed a pattern since re-firing the engines at Monmouth on June 3rd. She's won, then finished out-of-the-money and repeated the all or nothing cycle. As we mentioned already, she finished fourth in her last. The cycle says she is going to challenge for the win.

Her Aqueduct record is spotty, with a third in three races. That being noted, trainer Jason Servis wins at this level at a robust 26%.

OUTLOOK: The morning-line favorite, BONITA BIANCA, is definitely vulnerable. If she runs at/near her best, she will likely complete the win, lose, win cycle for a fourth time. She fits at the top of the ticket, but not alone. 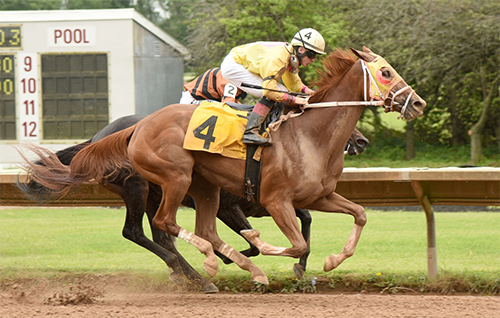 Can Bonita Bianca Pull Out Another Win?

She finished second to PINK TWIST as the $0.60 favorite in her last race. The three-year-old is one of maybe two front runners and is likely to run on/near the front early on. Although her speed figures and race-over-race fractions are nearly identical for her last two outings, she may have lost some sharpness. The first race was over the slop and she got a fast runway for the most recent. We'd expect to see faster numbers on a better surface.

Sunday's race is a first for her as she has not raced at this level. As previously mentioned, her trainer Philip Sepre has won eight of 32 non-graded stakes in 2018.

OUTLOOK: It would be encouraging if OUT OF ORBIT's race-time numbers improved prior to stepping up in class. She might factor into the decision if she can run modest early fractions on/near the lead, but she'll need to hold off stronger challengers than she might be accustomed to running against.

"BONITA BIANCA has won every other race going back to June 3rd. She finished fourth in her last race, so... SPLIT TIME is making her third start after a two-month break and is dropping in class. She fits at this level and at Aqueduct, winning three of five. FROSTIE ANNE finished second as the favorite in her last race, trainer Rudy Rodriguez wins at 24% the next time out. UNBRIDLEDADVENTURE gets to ride the 23% winning rail."

GET OUR FULL CARD PICKS FOR ALL OF SUNDAY'S RACES!