Saturday Stakes: Our Picks for the Belmont Stakes and the Jaipur Stakes

SPECIAL: Listen to our fifth episode of The Player's Edge for our take on the BELMONT STAKES. We also talk with the voice of Golden Gate Fields, track announcer Matt Dinerman. He shares his secrets on how he calls races, his thoughts on handicapping, gives us his picks for the Belmont Stakes and his top spot to eat if you visit Golden Gate!

For our BELMONT STAKES PICKS, give a listen to the podcast above. Our other focus today is on the Grade I, Jaipur Stakes. The ninth on Saturday's Belmont card is the race before the start of the Twisted Triple Crown, the Belmont Stakes. Let's see if we can find a winner to start the late Pick 4, which is sure to be a seven-figure money pool! You'll find a few of my dollars in there, for sure.

Eight starters are going to race on Belmont's Inner Turf course. These inner turf courses are marked by tighter turns that come more quickly than usual. Horses really need to be in form to navigate the compressed left turn. If not, they could drift out and open the path for horses in better shape.

Personally, I don't like riding with horses that haven't recently raced on an inner turf course. From my experience, horses that have a run on an inner track seem to perform better than those who haven't. Maybe it's anecdotal, but noticeable enough to shape the way I handicap quirky courses.

Four horses have given an inner turf course a try in their last 10 starts. 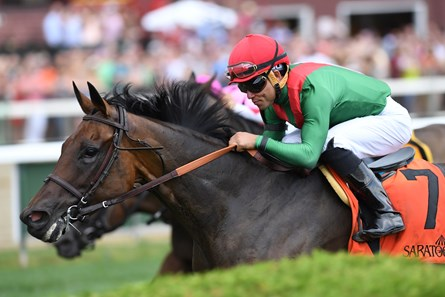 OLEKSANDRA (PP: 2 ML 7/2) has two races on Belmont's inner turf course, both Ws by a neck at the wire. She's coming off a second-place finish in her first start since October, just missing in the Grade II, Monrovia Stakes. Her history tells us she's probably going to be better in round two off the sidelines and her last was good enough. She tied for the highest, last race speed figure.

PURE SENSATION (PP: 4 ML 5/2) has one trip on Belmont's inner turf, finishing third by five after giving up the lead late. He was bumped at the start and maybe the contact took something out of him? Again, maybe its anecdotal, but probably not. From watching tons of Belmont races, it seems like trainer Christophe Clement is a whiz with inner turf races. Either way, the trainer is off to a blazing Belmont start, tied with uber trainer Chad Brown, winning at 24% (by far the highest win percentages for trainers with at least 20 starts.) 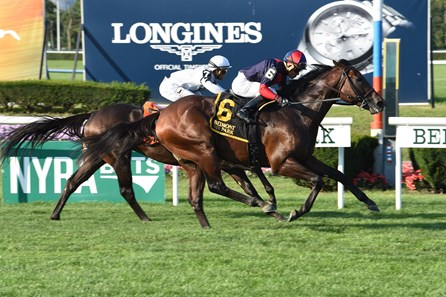 WHITE FLAG (PP: 7 ML 8-1) has three goes on inner turf, two at Aqueduct and one at Belmont, second by a half-length (a win and seventh in the AQ pair.) The second Clement trainee is unquestionably a horse for the Belmont course with four wins, the previously mentioned second and two thirds in seven starts. That's Belmont Beast mode! He has just one trip to the winners' circle in nine races anywhere else. You just can't overlook that record.

LONHTWIST (PP: 8 ML 50-1) has races on and inner turf course in three of his last four efforts and four of his last 10. He won his lone Belmont effort of the quartet. He's never finished out of the money at the distance in a half-dozen races, which account for all of his top three results in 16 starts. He was bad, really bad in his pair of non-graded stakes efforts. This is his first crack at the graded level; which happens to be at the top of the racing pyramid.

Unsurprisingly, we have three of the four as out top choice in our Pro Subscriber's Bonus Commentary:

"PURE SENSATION will have a chance to wire the field and runs the most consistent top numbers. OLEKSANDRA has two wins and a third in three at the distance. The two were on BP's inner turf. WHITE FLAG has hit the board in six of eight at the distance and never missed at Belmont. TEXAS WEDGE usually improve big time in second races off the bench. He ran his top speed figure ever in his first."