Breeders' Cup Crowns and Big Bucks are just three weeks away. Guaranteed Tip Sheet is going to help our readers get ready to make the most out one of Horse Racing Biggest Stakes Weekends. Our goal is to build the profile of a Breeders' Cup winner for most of the races before the first Breeders' Cup gate opens for the JUVENILE TURF sprint at 4:12 eastern on Friday, November 1, 2019.

Today, we'll develop the profile of a Breeders' Cup TVG Juvenile Winner. The race has implications beyond the $2 million jackpot as it features some of the top two-year-olds and possible 2020 Kentucky Derby Contenders.

EIGHT RINGS, DENNIS' MOMENT, MAXFIELD, and TIZ THE LAW sit atop the current Road to The 2020 Kentucky Derby leaderboard with 10 points each and are scheduled to run in the 2020 Breeders' Cup TVG Juvenile. 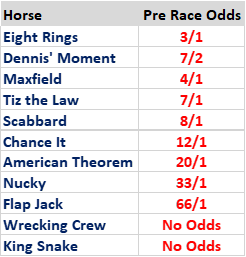 In 2008 and 2009, the race was run on a synthetic surface and there isn't a results chart for the 1986 race. So, we'll focus on the remaining races on dirt to build a winners' profile.

The curse of the chalk: Post-time favorites have won just one of the six Juvenile trophies on Santa Anita's main track. That doesn't mean you should leave them off your tickets as they've had a case of seconditis. The last three Breeders' Cup Juvenile post time favorites at Santa Anita took home place money. SHANGHAI BOBBY was the last favorite to score in the Juvenile at Santa Anita in 2012.

Outside Gate is Great: None of the six, dirt track, Santa Anita Breeders' Cup Juvenile champs left the chute from the one spot. The four and five holes have the most rings at two each, with the two and eight horses collecting one apiece.

Pace Makes the Race: None of the six winners lead the field from wire to wire, while two champs ran second at the quarter and half-mile markers before taking the lead for good after 6 furlongs. Otherwise, closing is the style of Breeders' Cup Juvenile kings. The reaming four winners raced 5th, 8th, 11th, and 12th at the half, and 4th, 7th, 10th and 10th after three-quarters of a mile. All six winners were in the top four heading into the stretch with four taking over in the last furlong.