Saturday is 2019's busiest day of Stakes racing. There are 17 big-money races with at least $100,000 on the line. Some of the finest thoroughbreds will race from the Atlantic to the Pacific, running in New York, West Virginia, Maryland, Arkansas, Florida, Kentucky, California and in Toronto, Canada.

Obviously, the standout is the $1 Million Grade II, CHARLES TOWN CLASSIC. Ten horses, four years old and up, will run 1 1/8 miles on dirt for their share of the two-comma prize pool. The field starts the race on the backstretch, passes by the fans on the front stretch, and turns again to the backstretch before making the final turn to come home. That makes it a three-turn race.

Generally, the rule of thumb is that one-turn routes (races of 1 mile or more) favor early speed types. Route races with two-turns or more tend to be grueling for frontrunners and gives the edge to horses that rate (run in the middle of the pack) or close (horses that start at the back of the pack).

However, Charles Town appears to defy conventional wisdom in the nine races at the distance. In the limited data set, seven of the nine winners (78%) were classified as speed horses. The average winner was near the lead at the quarter and half-mile markers, with three of nine scoring wire-to-wire victories. 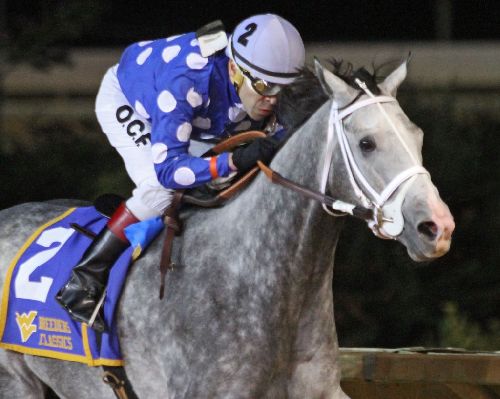 Of the quintet, the good-looking grey, RUNNIN'TOLUVYA is the one with the most 1s across his past-performance lines and will likely push for the lead early on. WAR STORY and DIAMOND KING should be right on the heels of the leader(s). NANOOSH and RALLY CRY won't be too far behind.

Along with early speed, post-position also provides a major edge. The rail has won two of the nine races (22%) with posts two and three gobbling up another 26%. The rest were won by posts four through seven and none from eight and out.

And here is our Pro-Subscribers' bonus commentary.

"WAR STORY's speed figures say he is the one to beat. DISCREET LOVER hasn't raced since the Breeders' Cup Classic in November. His recent workouts suggest he'll come off the bench ready. RALLY CRY owns the highest speed figure at the distance, meaning he has the highest ceiling. NANOOSH is making his first start for trainer Jorge Navarro, a 24% angle."


As always, you can get all of today's stakes races and full card selection by clicking here.

In the next few weeks, we'll be turning our attention and focus towards the 145th running of the Kentucky Derby. Tomorrow, we'll be highlighting some of the longshots that could liven up your tickets on the first Saturday of May. After that, we'll be profiling the leading contenders all the way to race day, May 4th.