Ping pong because they come out of the box bouncing off one another and are as predictable the daily pick 3. It's fun to watch as they look like stuffed sausages with short, stubby legs hustling as hard as they can for the tape.

With the limited calendar, the top race of the day is Race 9 at Gulfstream Park. It's a $50,000 Optional Claiming race, 6 furlongs on dirt for four-years-old and up. It's a short field with just six horses. Let's break down each horse and put together some potential tickets at the end.

MAGIC TAPIT (PP: 1 ML 15-1) draws the rail, which is winning at 19% for the distance and surface. However, he's not been in good form, finishing way behind the winner in five of his last six starts. The last time out he came home dead last of eight, a full 13 lengths behind the winner without any excuses. His workouts since his last race have been blah. The rail is the only reason to include him in exotics. 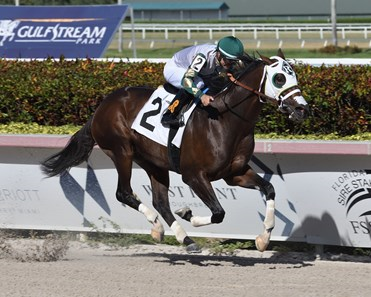 FROSTED GRACE (PP: 2 ML 7/5) is coming off the bench following a short rest. He has the highest speed figure for the distance, meaning he has the most upside. However, he's only won once in his last 10 efforts and his most recent fractions were slower than his norm. Additionally, his workouts have been terrible; although, that's not unusual for the morning line favorite. FROSTED GRACE looks like a vulnerable favorite. As such, we'll look for better value for the top of the ticket.

RUNNING FOR RIZ (PP: 3 ML 6-1) is making his third start after a layoff, which hasn't worked out too well for him. He ran 21 and 11 lengths behind the winner in his last pair of third starts. Each was by far the worst in the three-race cycle. He showed minimal improvement in his last effort but will need to show a lot more to make it to the winners' circle.

WHYRUAWESOME (PP: 4 ML 8-1) came close to cashing a check in each of his last 10 starts finishing fourth or better in nine of 10, fifth in the lone miss. He should be near the lead at a distance that favors speed and gets a jockey upgrade to Luis Saez, the top jockey in the race. To win, he's probably going to need a final time close to 1:11, but we suspect the winning time will be between 1:10.4 to 1:10.6. If we are right, WHYRUAWESOME has a shot at third or fourth, which looks like his comfort zone.

FUEL THE BERN (PP: 5 ML 7/2) is making his first Gulfstream start. He last raced at Aqueduct in early February and finished last in a field of seven. He's has some good workouts since, including a 4 furlong bullet on March 11. He's another that's likely to come out of the gate hot, which will give him a chance to get the W. He's been strongest at the distance with three wins in six efforts and trainer Danny Gargan knows where to run his horses, winning at 27% with shippers. He has a chance to win if he's ready to run.

WHERE PARADISE LAY (PP: 6 ML 5/2) posted the top, last race speed figure in a 6 furlong win on Gulfstream slop. Two of his three wins have come on an off track in just three wet races. If it's wet, put him on top. Otherwise, his numbers don't rate at the top of the pack and he finished well behind FROSTED GRACE and RUNNING FOR RIZ in recent starts.

Based on our review, FUEL THE BERN offers the best combination of value with a legit chance to win. So, we'll wheel him in an exacta with FROSTED GRACE and WHYRUAWESOME (5 with 2,4 and 2,4 with 5). We'll use the same base to build trifecta tickets adding WHERE PARADISE LAY and MAGIC TAPIT. Our trifecta tickets look like this 5/2,4/1,2,4,6 and 2,4/5/1,2,4,6.