AMERICAN ANTHEM is our selection to win the Grade II TRIPLE BEND STAKES at Santa Anita on Saturday. Could there be a more appropriately named winner on Memorial Day weekend? Stakes racing is as hot as the backyard grill this holiday weekend, starting on Saturday with 10 races offering $100,000 or more in prize money. They include:

Although none of the races specifically honor or are associated with the military, in the spirit of Memorial Day, we'll focus our attention on the races with names that invoke thoughts of the armed services, the WINNING COLORS STAKES and MARINE STAKES.

While the WINNING COLORS STAKES might make one think about the red, white and blue of the American Flag, it's actually named after the Kentucky Derby-winning filly, WINNING COLORS. The Grade III race features a packed field of 12, racing 6 furlongs on Churchill Down's main track.

The last two WINNING COLORS STAKES were won by jockey Brian Hernandez, Jr., who rides the room temperature morning-line favorite AWESTRUCK (PP: 9 ML 3-1). A three-peat could be a difficult task for Hernandez as he'll be riding against a few track biases for the distance and surface.

Outside posts have struggled to find Churchill's winners' circle with posts eight and out winning at a low percentage. Additionally, speed plays at 6 furlongs on dirt with 14 of 23 winners at the current meet labeled early speed. On average, the eventual victor runs second at the quarter pole and 1.3rd at the half-mile marker. 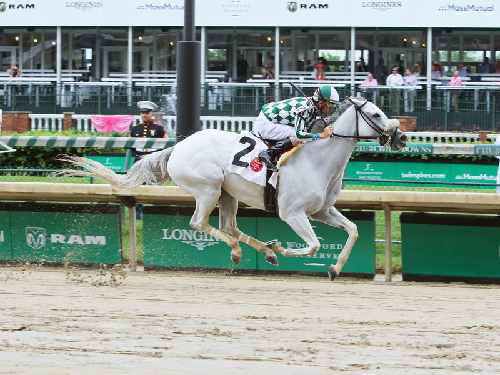 The beautiful AWESTRUCK at Churchill Downs

Except for her last race, a wire-to-wire win, AWESTRUCK has played the role of a closer in her last six races under a mile. Despite the track biases playing against Hernandez and AWESTRUCK, our handicapper believes they'll still figure prominently in the WINNING COLORS STAKES.

"LET IT RIDE MOM has two wins and a third in three outings at the distance. AWESTRUCK has the highest, last race speed figure for this crew and has two wins and two seconds in six Churchill starts. HONEY BUNNY has won five of her last six races, including a blowout at CD in her last. ANNATHELA is a horse for the course with three wins, four seconds and a third in 10 races."

There isn't a need to explain why the MARINE STAKES provokes thoughts of ... well, Marines - OOH RAH! The irony is the MARINE STAKES is run at Woodbine Racecourse in Toronto, Canada. It's the final prep race for The Queen's Plate, Canada's most prestigious race and North America's longest continuously run race, dating all the way back to 1860.

The MARINE STAKES is a skinny field of five, three-year-olds that will run 1 1/16 miles on Woodbine's all-weather track. Based on speed figures and morning line odds, LYRICAL NOTE (PP: 5 ML 20-1) is a toss out. Meanwhile, on the other end of the barbell, oddsmakers see SKYWIRE (PP: 2) as a prohibitive favorite at 3/5.

Can he be beaten? The one most likely to upset SKYWIRE is GLOBAL ACCESS (PP: 1 ML 2-1). The duo matched up in their last race with SKYWIRE scoring the W over GLOBAL ACCESS by 2 1/2 lengths. However, GLOBAL ACCESS was bumped at the start of the race. 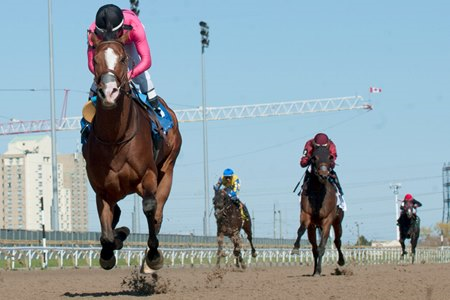 Maybe, a cleaner start could be enough for GLOBAL ACCESS to turn the tables. Doubtful, but either way, the pair as likely to run one-two again according to our bonus commentary:

"SKYWIRE has two wins in two Woodbine races and is two-for-two at the distance. GLOBAL ACCESS rides the fence, which is winning at 27%. HOFFA's UNION's trainer Mark Casse wins at 32% taking a horse from dirt to an all-weather track. DABO looks tons better than LYRICAL NOTE."