Is the Pegasus World Cup the first big race of the new year or the last hurrah for 2019? Race founder, Frank Stronach thought a big race in late January would not interfere with the Breeders' Cup in November and the Dubai Cup in late March.

It's also one last chance for horses the collect a fat check before the North American breeding season begins in mid-February. That was the plan for OMAHA BEACH, one more run and then go to the farm and stud. However, a broken ankle prevented the pre-race, even-money favorite from his chance at the winners' claim of the Pegasus' $3 million prize pool. 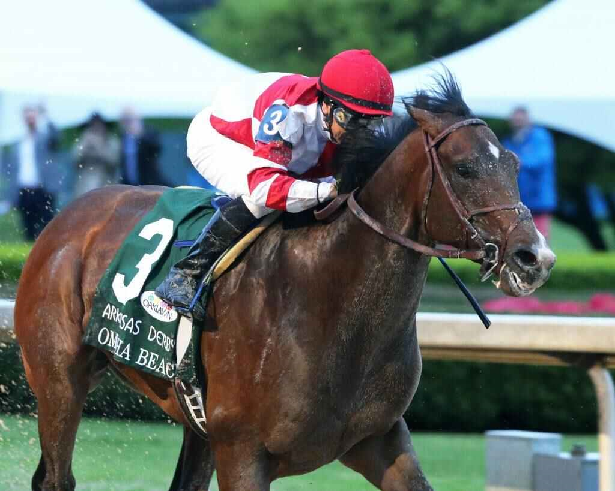 OMAHA BEACH at the Arkansas Derby

SPUN TO RUN will also miss the Pegasus World Cup with skin rash. With the two morning-line favorites scratching, the field narrows to 10 and the door swings wide open for another to stake his claim as the 2020 Pegasus World Cup Champion.

Speed can be hard to beat at 1 1/8 miles on Gulfstream's main track. Our analysis for the last 70 races at the distance revealed that the first two horses to reach the quarter-mile marker have a combined, 40% chance to hit the finish line first.

Likely new favorite, MUCHO GUSTO is one that likes the view from the front. He run first or second at the first call in eight of his last 10 starts. Jockey Irad Ortiz, Jr. is sure to take the Bob Baffert trainee to the front straight from the gate.

MUCHO GUSTO failed as the public's choice in his last as he was pressured all the way around the track and faded in the stretch to fourth. Although Baffert rebounds at 31% with beaten favorites, MUCHO GUSTO could be a vulnerable favorite as he tends to weaken late when challenged at the upper levels.

He is sure to get some frontrunning company from TAX, MR. FREEZE and BODEXPRESS. The fastest out of the gate is likely to be BODEXPRESS. His last three race past performances are populated with nothing but 1s with two wire-to-wire win and a third in his last.

Despite the show finish, it might have been his best race of the three. The four-year-old son of BODEMEISTER was fractious before the race and yielded last. He may have lost the race before it started. Inside the numbers, horseplayers can see he ran his fasted 6 furlong time in a 1 1/16 mile race. That time was even faster than his final number in two 6 furlong starts.

MR. FREEZE and TAX aren't classic frontrunners, but they do like to hug the leaders and run a pressuring shotgun. MR. FREEZE hit the quarter pole first, second or third in eight of his last 10 efforts. He was no more than a length from the leader in five of those eight and never more than 1 1/2 lengths.

The Dale Romans trainee has hit the board in eight of his 10 starts. He stopped in the Pennsylvania Derby at Parx and his lone trip on grass. If he doesn't stop, MR. FREEZE should be a major contender.

TAX slugging it out at Aqueduct

TAX usually positions himself behind the leader(s), hanging second or third in seven of his last nine races. He's not as fast as out of the chute MUCHO GUSTO, BODEXPRESS and MR. FREEZE. Expect jockey Jose Ortiz to rate TAX right on the heels of the three frontrunners, probably in fourth.

As long as he's within a few lengths of the pacesetter, TAX will be right where he wants to be, especially at 1 1/8 miles where he's never finished out-of-the-money. He has two wins, two seconds and a third at today's distance.

Our handicapper expects speed will hold with the four we think are the fastest finishing in our top six picks and three of the first four. From our Pro Subscribers' Bonus Commentary.

"The race dynamic changes with OMAHA BEACH and SPUN TO RUN scratching. TAX runs his best coming off the bench, like today, with a two wins and two seconds in his last four first starts. MUCHO GUSTO has four wins, two seconds and two thirds in nine fast dirt start and is probably the biggest beneficiary of OMAHA BEACH scratching. HIGHER POWER has finished in-the-money in five straight and eight of 10. MR. FREEZE has hit the board in seven of eight."

There are eight other stakes races with at least $100,000 in prize money on Gulfstream's Saturday card. We cover them all in great detail in our 2020 Pegasus World Cup Wager Guide. Don't go to the races or the online wagering site today without it.