It's a somewhat quiet weekend of stakes in horse racing. In total, there are 13 contests with at least 100 grand in prize money. The larger money-pool tracks, Belmont, Keeneland, and Santa Anita are only hosting four of the bigger races.

As you can see from the available winnings, it's a weekend of rest at the more popular tracks. This Saturday, the center of the horse racing universe is Cleveland, Ohio and Toronto, Canada. Thistledown is hosting a handful of stakes races and Woodbine will run a quarter.

Today, we'll focus our insights and commentary on the trio with the most money at stake. Now this is a race that's named like it should be in Canada instead of Kentucky. The QUEEN ELIZABETH II CHALLENGE CUP STAKES. The race had its first run in 1984, honoring the Queen who was on hand for the inaugural romp. It's since become a tune-up race for the Breeders' Cup Filly & Mare Turf.

Eight three-year-old fillies will take to the Keeneland race track turf to run 1 1/8th miles. Meet-to-date, there have been five 1 1/8th grass runs and two of them went wire-to-wire. Looking at the field, there is only one horse that shows only recent interest in running up front, the 7/5 morning-line favorite RUSHING FALL (PP: 8).

In her first three starts, RUSHING FALL fell to the back of the pack and tried to run them down late. Three races back, past-performances show a new strategy of hugging the leaders. Minus French import, MISSION IMPASSIBLE (PP: 5 ML 6-1), where no data is available, all the other runners are stalkers or closers.

That means RUSHING FALL has a good chance to live up to her early odds. From our pro-subscribers' commentary, "RUSHING FALL is a neck away from being undefeated in 6 races. She looks the best on paper and should be the best on the track. MISSION IMPASSIBLE is making her first US start. Typically, international horses need one on US soil before showing their best. She did beat our third choice, FATALE BERE, in France. FATALE BERE will be bringing it late with a strong stretch kick. NYALETI might be the horse to the lead, maybe second, as there is little early speed in this bunch. If she can run moderate fractions, she could steal it with the rail winning at 20%."

From a Canadian sounding race to races in Canada

The CANADIAN INTERNATIONAL STAKES precede Woodbine with the gates opening for the first time in 1938 on the dirt at Toronto's Long Branch Racetrack. Since, it's gone through many changes, from conditions, to surfaces, to the name of track.

As it stands today, it truly is an international race as four of the contestants have their roots in Europe. Three horses are making their first North American starts: THUNDERING BLUE (PP: 2 ML 2-1), KAHN (PP: 3 ML 10-1) and DESERT ENCOUNTER (PP: 10 ML 6-1). BANDUA (PP: 8 ML 20-1) ran four times in Ireland before the colt's last two runs at Kentucky Downs and Arlington Park.

Seven others will head to the starter's gate with the four worldly travelers to run a demanding 1 1/2 miles on the turf. As you can imagine, 1 1/2 races are not part of the normal race day schedule. Woodbine has hosted six of them in the last six-months. Half of the winners led out of the gate and never looked back.

With limited information available on the foreign partakers, one must rely more on race comments, trainers, and jockeys when lining them up in projected order. Here is how our handicapper sees it, JOHNNY BEAR has three straight triple-digit speed efforts, the only horse in the field with that claim. THUNDERING BLUE has been running a strong schedule in Europe and should be competitive against this crew. DESERT ENCOUNTER has been bet well in European Graded Stakes races and comments say he'll be running late. FUNTASTIC has won four of nine on the turf and trainer Chad Brown wins at 26% with shippers."

We wrap up our coverage with the Grade 1 E.P. TAYLOR STAKES. The namesake, Mr. Taylor, is a member of the Canadian Horse Racing Hall of Fame, President of the Ontario Jockey Club from 1953 to 1973, and founder of the Jockey Club of Canada and Canada's most successful horse breeding operation, Windfields Farm.

Not only is the race named after E. P., so is Woodbine's Turf Course. The 10th run in his honor is another race with international flavor as three of the nine fillies and mares are making their first starts on this side of the Atlantic Ocean.

Typically, we like to run the numbers, compare our rankings to track bias, and adjust accordingly, but mixing in quality ghost horses with little paper trail requires more reading between the lines and intuition in the recipe. 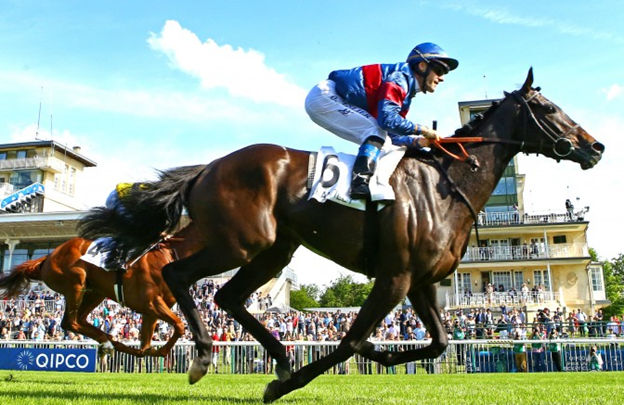 Pollara Taking the Tape in France


According to our take, this is how the cake will be baked at the finish line, "POLLARA Trainer Chad Brown wins at 29% with horses making their first start with him. ELYSEA'S WORLD is always in the mix late and is another Chad Brown horse. He should be charging late. SANTA MONICA ran his best US race on Woodbine turf and his closing style fits. STARSHIP JUBILEE appears to be in top form, winning his last two with ease on the Bine grass."

GET OUR FULL CARD BELMONT AND KEENELAND PICKS!