Sunday Stakes: Our Picks for the SAN VINCENTE to cure Your NFL Blues

For many, the first Sunday after the NFL season has that "what am I going to do now?" feeling. There is WWE's version of football, the XFL, PGA Golf, the NBA and College Basketball.

Ah, but for us horseplayers, there is no such feeling this time of year. As spring approaches, the Sport of Kings builds towards its Super Bowl season, the Derby Preps, to the Triple Crown into the Breeders Cup. Along the way, we get stakes races, mini playoffs if you will, to showcase some of the sport's best talent. 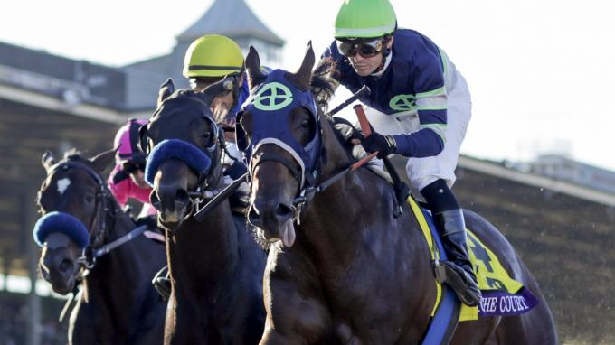 STORM THE COURT holding off the competition at the Breeders' Cup.

Jockey Flavian Prat took STORM THE COURT to the front from the start in the Juvenile and never gave up the lead. Both of the horse's wins have come with him first or second out of the gate. Expect Prat to hustle STORM THE COURT at the crack of the gun.

NADAL (PP: 4) is to STORM THE COURT's inside and is the morning line favorite to wear the SAN VINCENTE crown and cash the winner's $120,000 check at 4/5. NADAL is trained by Bob Baffert and won his debut as the 6/5 favorite. He popped out of the gate and took charge of the field of seven immediately. He inched away from the field all the way around the oval, extending his lead from a head at the quarter pole, to a 1/2 lengths at the half, 2 lengths in the stretch, as 3 3/4 at the wire. 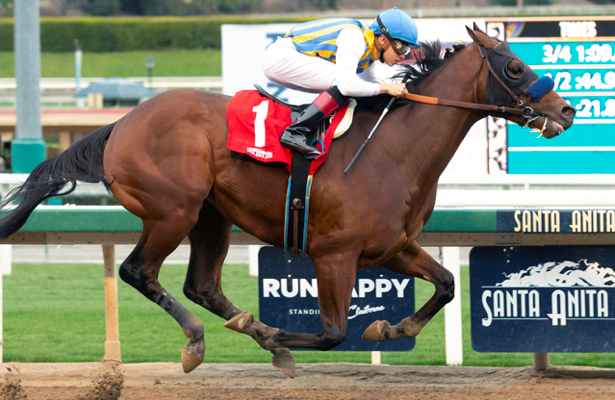 NADAL making it look easy in his debut.

Owners Bolton, George, Hoyeau, Arthur, Lipman, Barry and Mark Mathiesen paid 700 grand for NADAL, the most expensive horse in the field, $200,000 more than the closest RA'AD (PP: 2 ML 8-1). He ran the second-best speed figure for all the horse's in this group in his first effort. If he gets any better in round two, he'll make a big dent in his purchase price.

FAST ENOUGH will likely come from off the pace and might not have enough to catch all of them before the wire, but he looks like an overlay at 12-1.

As we mentioned above, RA'AD is a half-million-dollar horse, son of TWIRLING CANDY. He is also part of the Baffert barn. He broke his maiden at the $40,000 level at Los Alamitos on a good surface. He debuted on a fast Santa Anita track, finishing a well beaten fourth.

Our preference would be for RA'AD to score on the dry hard track and falter on the wet stuff. Nonetheless, horseplayer cannot overlook the jockey and trainer combo of Drayden Van Dyke and Baffert. The duo wins at 38% together and hit the board in five of their last eight starts.

Our handicapper stacked'em up in the order listed above and suggests using STORM THE COURT and NADAL at the top of your tickets.