From upsets at Gulfstream Park to the Springboard Mile at Remington Park, here's your weekend stakes racing round up.

Talk about a comeback story for GLORIOUS EMPIRE, who couldn't be caught on the turf at Gulfstream this weekend. The seven year old was running in claiming races just this summer. Six months later and he's won three graded stakes and may be up for an Eclipse award. The gelding made it look easy in the $200,000 Fort Lauderdale Stakes (G2T) Saturday under the lights. Sitting in the number one post position worked out well for him in the 13 horse field. With fast fractions of :23.57 and :48.13, he kept the advantage over HI HAPPY until kicking away and crossing the wire unchallenged. QURBAAN moved ahead to take the place over HI HAPPY, who finished third. GLORIOUS EMPIRE covered 1 1/8 mile distance in 1:48.44. His connections are now eyeing the Pegasus World Cup Turf Invitational (G1T) on January 26th.

Under a steady downpour, a field of six loaded into the gates for the $100,000 Harlan's Holiday Stakes (G3). AUDIBLE was back as the 1-5 favorite, but it was the 25-1 longshot that ended up with all the attention.

After a clean break over the sloppy, but sealed track, SIGHTFORSOREEYES and MINUTE MADNESS set the pace. SIR ANTHONY cut inward from the far outside to take the rail. Setting fast fractions, the leaders faded drastically at the top of the stretch while SIR ANTHONY saved ground on the inside and picked up the pace. Running three wide, AUDIBLE built momentum before shifting out in the final turn. He made a move near the finish, but SIR ANTHONY maintained his advantage and cut deep to win by half a length. APOSTLE finished third behind AUDIBLE.

With just four starts, DREAM PAULINE pulled out her first stakes win at Gulfstream in Saturday's Sugar Swirl Stakes. The three year old by TAPIT moved into second in the backstretch after fast fractions of :22.73 and :46.26. Opening up at the stretch, the chestnut filly began to waver, but was saved by the wire as STORMY EMBRACE advanced. The filly has taken some time to get her career going after battling sickness and other minor issues that kept her from qualifying for the Breeders' Cup Filly and Mare Sprint in November. She broke her maiden in a 6 length romper debut at Aqueduct last December and finished third in the Dream Supreme Stakes November 4th.

With five of eleven horses in the field, the odds were definitely in Asmussen's favor for a win, but he managed to get the 1-2 win with LONG RANGE TEDDY and BANKIT following. A longshot at 18-1, LONG RANGE TEDDY stepped it up in the turn going four wide and rallying late to win by a head under jockey Richard Eramia. BANKIT challenged on the outside, but didn't have enough. DUNPH finished third. LONG RANGE TEDDY earned 10 points towards the Derby, while BANKIT earned four and DUNPH earned two. 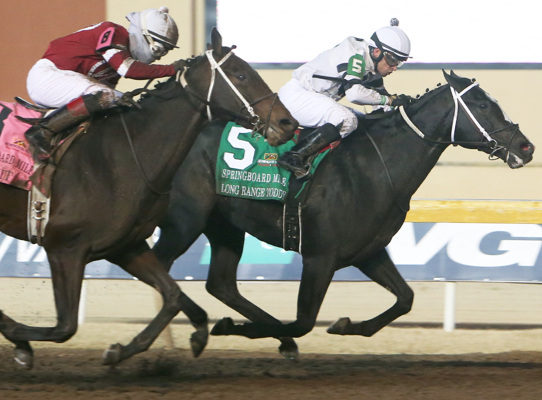 If we had to pick our favorite wagers, in terms of potential payoffs, it would be the pick 3s and 4s, with an occasional pick 5. And we hit plenty of them over the Friday through Sunday racing weekend. Things got started in an "OH YEAH!" kind of way on Friday. The first three races at Aqueduct paid $1,713.00 for a $2 pick three.

Hopefully you had the ticket with our second pick in race one, our top pick in race two (paid $15 to win), and our third pick closed out the P3.

On the other side of the country, at Los Alamitos Thoroughbreds, we put things together in the right order for the first five races on Sunday.

Check this out -> In the first race, our second pick came home first. In the second race, once again pick number two got the first place prize. As expected, our best bet won and paid $15.60 in the third. The fourth also saw our second choice find the tape and our top pick won the fifth.

Unlike baseball, you didn't have to go deep into our picks to hit a home-run. The $2 payouts when race five went official were:

To those who pressed enter with those beautiful tickets, congratulations. Make sure you tell a friend about us. For those of you who missed, no worries. We handicap almost all the tracks running every day. Play our picks and you'll likely have your "OH YEAH!" moment soon enough.